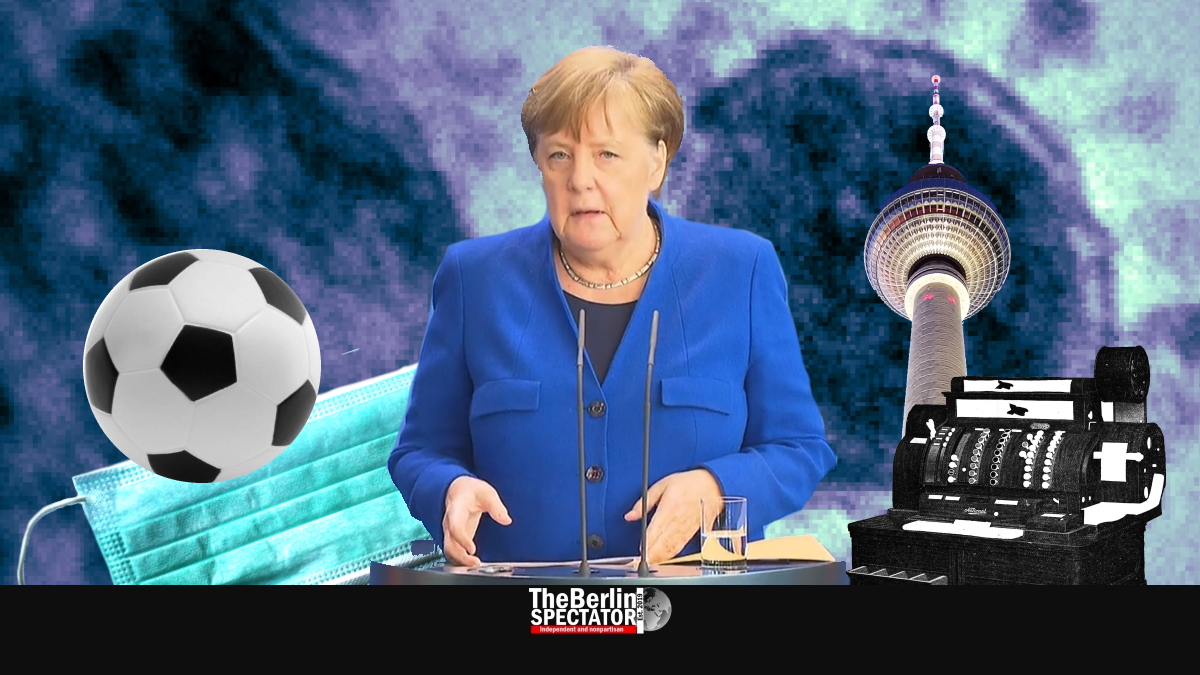 Eighty-five days after the first Coronavirus case was reported in Germany, the arguments are returning. Instead of acting in concert, more and more high-ranking politicians are torpedoing each other.

After last week’s agreement on some cautious steps towards easing Corona rules and lifting bans, some federal states in Germany, and their First Ministers, seem to intend to make their mark. Political gain might be the motivation. The national unity was crumbling, to some extent.

Just a few hours later, she was back at the microphones, asking the nation to take the Coronavirus seriously. “Acting too quickly might be a mistake”, the Chancellor said. This message was addressed to North Rhine-Westphalia and other federal states who seemed to be interpreting the new Corona rules too freely.

“Let’s hope there will not be another shutdown. But this would be the consequence if the numbers climbed again”, Merkel said. “The margin we have granted ourselves should be used as tightly as possible rather than as widely as possible”. This was another message to some First Ministers.

Criticism from Altmaier and Klingbeil

Commerce Minister Peter Altmaier, one of Merkel’s confidants, criticized them as well. “There are some federal states that are modifying the agreement [struck between Merkel and the First Ministers on Wednesday] in one or another direction”, he told the ARD radio and television network. “I do not think this approach is optimal. On the other hand, we are a federal country in which the states decide, after all.”

Lars Klingbeil, the Social Democratic Party’s (SPD) Secretary General, was far less diplomatic. He accused the First Ministers of Bavaria and North Rhine-Westphalia, Markus Söder and Armin Laschet, of stage-managing themselves in the Corona crisis. The “contest between Düsseldorf and Munich” was gradually getting out of control, Klingbeil told the ‘Rheinische Post’ daily.

“At times, this seems like a cockfight for Merkel’s legacy in which the participants stalk each other and compulsively try to be faster than the other”, Klingbeil stated in the interview. He said this development was “dangerous and improper, considering the situation. The circumstances are far too serious for this.” Klingbeil’s SPD is one of the two junior partners in Mrs. Merkel’s government coalition.

While the discussion about a further easing of the Corona restrictions continues, the one about protective masks does too. According to German-language publications, Annalena Baerbock, the chairlady of the German Greens, said wherever people met other people, such as on public transport, a mouth and nose protection needed to be worn.

Her colleague Winfried Kretschmann, the First Minister of Baden-Württemberg and the only Green politician in this kind of position, reportedly wants to make masks mandatory as well. A bit further east, in Bavaria, First Minister Söder has already announced a step in that direction.

German airports and airlines want the same thing, mandatory masks, on flights, according to the ‘Frankfurter Allgemeine Zeitung’ daily. The paper quotes a concept paper authored by a group of companies in the aviation business which says passengers should wear masks during boarding, on board and while exiting the plane. At this stage, there are hardly any flights, thanks to Corona.

Since yesterday, masks are mandatory in the city of Wolfsburg. This applies in public buildings, shops and on public transport. In Saxony, the situation is similar. According to a poll, almost half the German population is in favor of making masks mandatory.

In the meantime, while the arguments about the kind of shops that should be reopened continue, the moment many Germans have been waiting for may be arriving soon, namely the return of soccer. The First Ministers Markus Söder and Armin Laschet told the ‘Bild’ live video channel, “ghost matches” in the German Bundesliga should be possible from May 9th, 2020. ‘Ghost matches’ are televised soccer games without audiences on site.

In Munich, First Minister Markus Söder and First Mayor Dieter Reiter announced the cancellation of this year’s Oktoberfest. “The two of us are the biggest fans”, Söder said, referring to the largest festival on Earth. But the risk was simply too big. At the Oktoberfest, keeping one’s distance to others or using protective masks was just not possible. Söder also rejected the idea of having a smaller festival instead. Mayor Reiter stated this was a sad day.

At the Oktoberfest, the First Mayor of Munich traditionally taps the first beer barrel, while the First Minister of Bavaria gets to drink first. The event has a long tradition, but it is also a money making machine. The turnover is usually above 1 billion Euro. The Oktoberfest’s cancellation also affects restaurants, hotels and other businesses in Munich.

On Tuesday in the early morning, the number of persons infected with the Coronavirus in Germany stood at 147,000. Just over 95,000 individuals were cured, according to estimates. Exactly 4,862 related deaths have been reported.