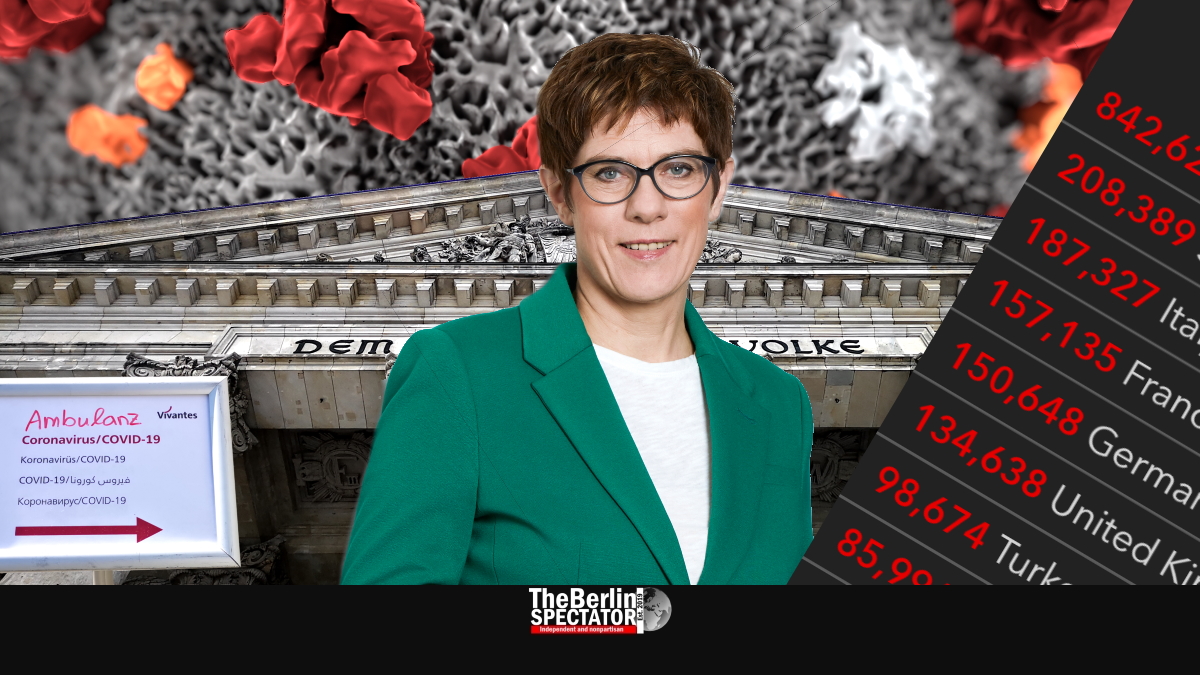 In Berlin, the coalition parties approved an additional aid package worth billions. It will help employees, businesses and students. The number of persons infected with the Corona virus in Germany just hit 150,000.

In Berlin, the heads of the parties which are part of Mrs. Merkel’s grand coalition, namely the conservative CDU, its Bavarian equivalent CSU and the center-left SPD, took decisions during a long meeting. Chancellor Merkel was not present because she has not been her party’s chairperson for a while now.

Very early this morning, after midnight, Annegret Kramp-Karrenbauer of the CDU, the CSU’s Markus Söder as well as Norbert Walter-Borjans and Saskia Esken of the SPD announced the results. “It was worth it to sit together for a long time”, Kramp-Karrenbauer said after seven hours of talks.

Germany’s new aid package includes a temporary increase of the short-time working benefit. It will be increased incrementally, to a maximum of 80 percent, or 87 percent for parents. This means the recipients will be paid this percentage of their loss of pay caused by the Corona crisis. So far, the Federal Employment Agency had paid 60 percent, or 67 percent for parents. There are more good news for employees: They are now allowed to earn more money on the side.

Tax relief for mid-sized and small businesses is part of the new Corona aid package too. Losses caused by the Corona crisis may be offset against advance payments on taxes. This measure is supposed to help companies to remain solvent. Only a few weeks back, the German government had already agreed to a huge aid package for companies. More will follow after the Corona crisis.

Businesses that are part of the food service industry suffer the most in this crisis, because restaurants are still not allowed to open for guests. Selling takeout food is all they can do right now. They are supposed to get a tax relief as well. The VAT for food in this business will be reduced from 19 to 7 percent from July 1st, 2020, until June 30th, 2021. This is a step the food service industry had demanded from the government.

Support for Students and Schools

There is yet another element of this aid package: Unemployment benefits are being increased. Former employees who were fired because the Corona crisis took the companies they worked for out of business will receive more money. The higher level of unemployment benefits will be paid three months longer than before, under certain conditions.

One more step was taken in Berlin: Pupils whose parents are poor can apply for a grant of 150 Euro (162 Dollars or 131 Pounds) in order to purchase the computer they need to take part in online classes. Schools may also apply for grants they can use for technical equipment needed for online classes.

Because of all the aid packages Germany has created for companies, employees, tenants, parents and others, the country’s national debt is increasing substantially. After the Corona crisis, Berlin intends to approve a huge aid program which is supposed to jump-start the economy.

On top of it all, there is no shortage of government officials who want additional funds. Development Aid Minister Gerd Müller just demanded another 3 billion Euro (3.25 billion Dollars or 2.6 billion Pounds) for the fight against the Corona pandemic in poor countries. Müller said in an interview with the ‘Funke Mediengruppe’ publishing house, the 1 billion Euro he had were not nearly enough.

Corona App to be Developed

Months into the Corona crisis, it looks like Germany finally picked a Corona app for smart phones. The software program will be developed by an initiative called ‘Pepp-PT’ according to German-language media. The app people will be able to install on a voluntary basis is supposed to tell users whether they were in contact with individuals who are infected with the Coronavirus. In Germany, everything having to do with data collection triggers long discussion because data protection is being taken seriously, maybe even too seriously, in some ways.

In the meantime, the number of people infected with the dangerous Coronavirus in Germany just exceeded the 150,000 mark. But 100,000 individuals who used to be infected are cured. There are 5315 related deaths.