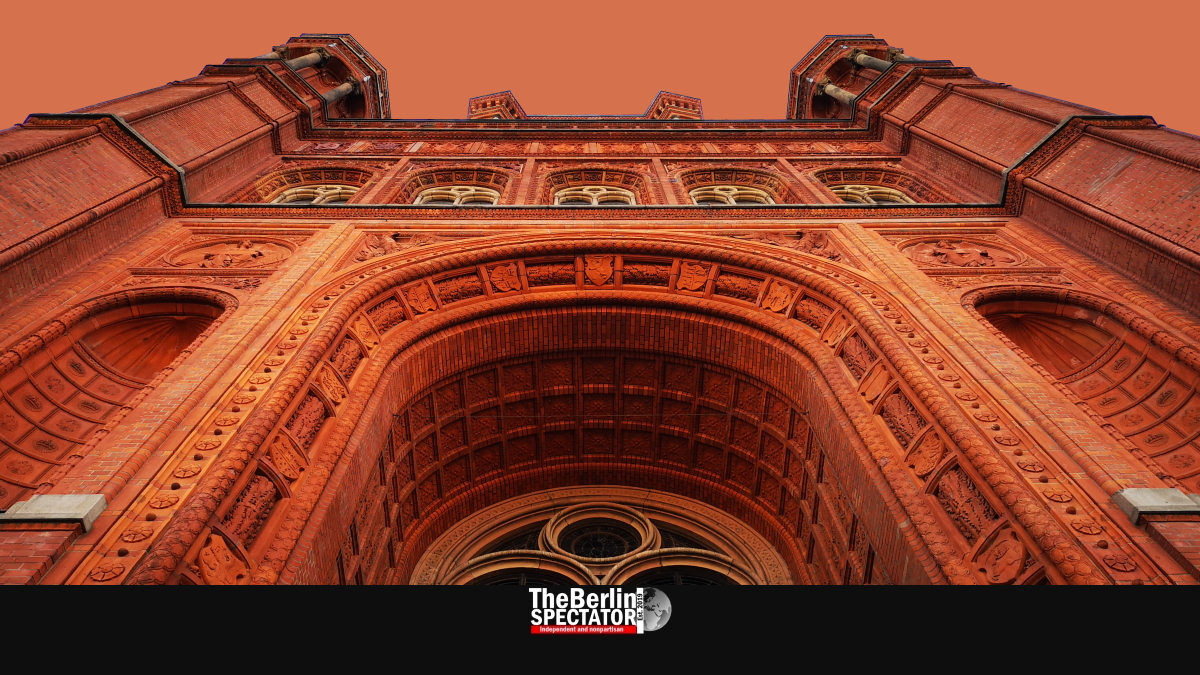 Red City Hall in Berlin is as attractive as it is historic. It was used by Nazis and the communists before Berlin and Germany were reunified. The building’s big birthday is being celebrated this year.

Berlin’s Red City Hall accommodates the Governing Mayor and the Senate. Considering its function for a city state within Germany, the building is rather large. It has 247 rooms, almost twice as many as the White House in Washington D.C.. With 8720 square meters, it is also a lot larger.

Its size becomes evident when looked at from above, for instance from the observation deck in the neighboring TV tower. Located between ‘Rathausstrasse’, ‘Jüdenstrasse’, ‘Gustav-Böss-Strasse’ and ‘Spandauer Strasse’, Red City Hall is also one of Berlin’s main sightseeing objects. It took ten years, from 1861 to 1871, to erect the giant building. While the construction in parts of Red City Hall was still ongoing, the first Berlin city council assembly session took place there on January 6th, 1870.

Red City Hall’s tower is 94 meters (308 feet) high and symbolizes self-confidence. The building’s name does not derive from left-wing politics Berlin is known for, but from its color. Millions of red bricks, a material preferred in all of northern Germany, were used for the impressive construction. One thing is certain: Red City Hall will never be mistaken for any other building.

Of course it had its price tag. Three million Marks were supposed to be invested. But during the construction period, the price more than tripled. The entire history of Red City Hall is being told in a chronicle released earlier this year (German only).

Now, 150 years after its construction, Berlin’s Red City Hall is supposed to become a building for all Berliners, the Governing Mayor’s office recently announced. Since February, the Senate Chancellery has unveiled sights from behind the scenes on its social media channels. And in summer, Governing Mayor Michael Müller was going to inviting residents to a big party, before the Corona crisis hit.

The Governing Mayor, his staff and the Berlin Senate cannot complain about a lack of room, as opposed to many other residents of this growing city. Some of the rooms are being used for receptions of guests of state who come over from the Chancellery or ministries, and Müller’s colleagues from metropolises all over the globe who visit the German capital. At least they did before Corona.

Later this year, Red City Hall will finally have its own ‘U-Bahn’ train station. Two busy lines, the U5 and the U55, are being merged. The construction the entrance to which is located right next to one of the main entrances to the building, is costly and complicated, also because it involved a lot of water around Museum Island.

When the ‘U-Bahn’ tunnel construction commenced, parts of the medieval city hall building, Red City Hall’s predecessor, were found buried in the ground. Some of them are to be presented behind an ‘archaeological window’.

In Nazi Germany, there were no city council assemblies anymore. Its last session took place on March 12th, 1933. The Nazis also changed part of the interior of Red City Hall. A fountain made out of bronze was installed right outside the building in 1936. But it was scrapped a few years later. The material was used for weapons during World War II.

In 1943, Red City Hall’s ballroom was hit during one of the Allies’ bombing raids. More damage was inflicted to the building from above in 1944 and 1945. On its way into Berlin, the Red Army shelled it. About half the construction was rubble. From 1951 to 1956, an extensive reconstruction followed.

During the Cold War, the Mayor of East Berlin was accommodated at Red City Hall. From October 1st, 1991, a year after Germany’s reunification, the Governing Mayor of all of Berlin was back where he belonged. Today, Red City Hall is both a historic and modern place. In 2010, a photo-voltaic system was installed on its roof. It delivers a lot of energy.

By the way: While the first city council assembly at Red City Hall took place exactly 150 years ago, on January 6th, 1870, the first magistrate session happened there five years earlier, on June 30th, 1865, meaning it is actually the building’s 155th birthday.