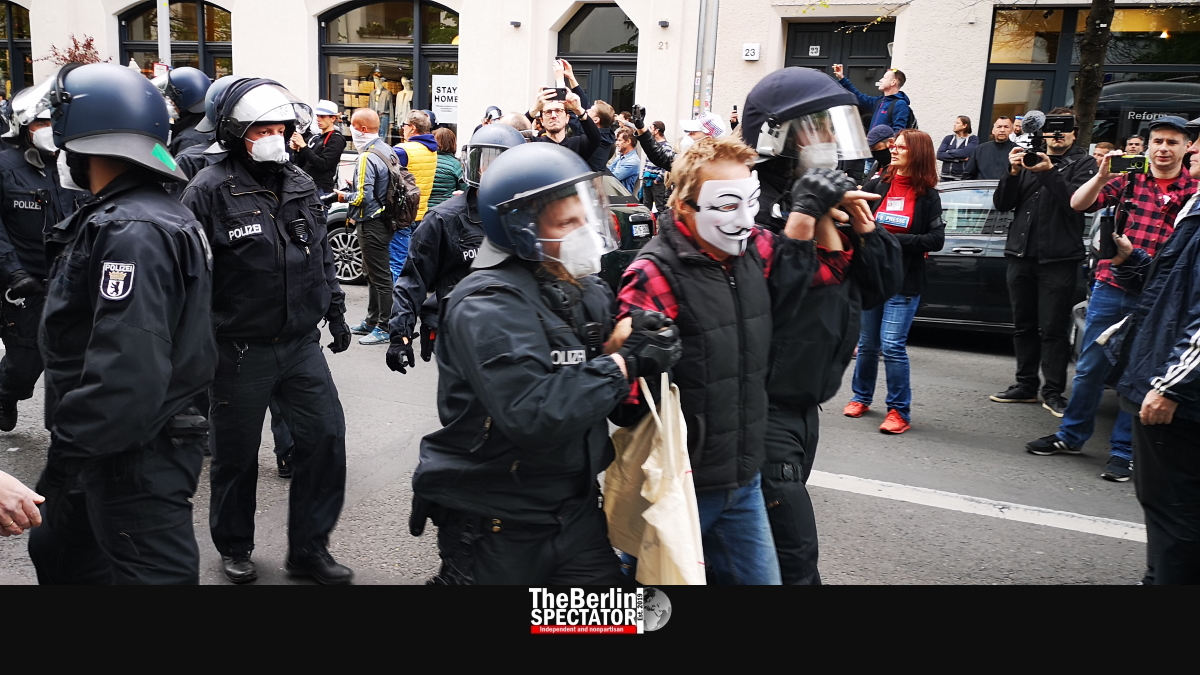 In Berlin, conspiracy theorists and other individuals demonstrated against Germany’s Corona rules on Friday. Police made sure not everyone who intended to participate got there. Dozens were arrested.

In 1989, a young radio presenter and power talker entertained listeners of ‘Neufunkland’, a radio station in the southern German town of Reutlingen. Ken Jebsen, whose actual name is Mustafa Kashefi, liked presenting Funk tunes to listeners, by artists like Mtume or Curtis Mayfield. The author of these lines was a news editor and presenter at the same radio station back then.

Star on the Roof

Now, more than thirty years later, Ken Jebsen is being called a leading conspiracy theorist by German media. He believes in the usual fairy tale of Jews controlling the world’s media. Besides, he says America was responsible for 9/11 and for the Crimea conflict.

Today, Jebsen – or Kashefi – sat on the roof of a camper van parked at Rosa Luxemburg Square in Berlin, right next to the location of the so called “Hygiene Protest”. He wore grey warpaint in his face and seemed to be meditating or praying, for everyone to see. In the world of German conspiracy theorists, Jebsen is a star. His website is sponsoring the weekly “Hygiene Protests”.

Apart from him, Martin Lejeune was at the demonstration, a prominent reporter whose critics accuse him of spreading propaganda by Palestinian terror organizations. He said he had come to cover the event, but he was definitely among like-minded people.

Officially, the demonstration was against the restrictions designed to curb the spread of the Coronavirus, but it included quite a few antisemitic haters. A mummed man walked around with a sign that said this: “Why weren’t there any ‘Zionists’ at the World Trade Center when the COVID-19 outbreak began?”.

A few non-radical demonstrators came to Rosa Luxemburg Square as well. Two women with signs saying “Mothers for freedom and basic rights” said they wanted more media coverage of statements on Corona by the opposition at the Berlin Bundestag, and that they hoped their children would soon be able to go back to the normal life they had had before the crisis.

The Berlin Police Department made sure many more people who wanted to join the “Hygiene protest” as well did not even get there, also because demonstrations with more than 20 participants are banned due to the danger posed by Corona. So hundreds of police officers blocked access to the square in four streets. They told the crowds to go home.

After warning them several times, officers in riot gear started arresting people. Dozens were taken to a police station nearby. In these situations, charges are usually being filed against those individuals, before they are being released. The Berlin Police Department said criminal procedures and regulatory offenses had been initiated in 105 cases.

On the square itself, some 400 people, including those prominent haters, and media representatives were reminded to obey the distance rules. Police kept on warning everyone through loudspeakers installed on top of a van. But the situation here, right in front of Berlin’s famous ‘Volksbühne’, was chaotic.

The venue’s management had hid the theater’s sign before the protest. Posters saying “We are not your backdrop” were seen all over the place. If there is anything the theater’s staff does not want, it is being affiliated with conspiracy theorists and haters.

Germany: Government to Approve Yet Another Corona Aid…

Germany: Merkel Does Not Want to Fly to U.S. for G7 Summit…