Berlin: Radical Left to Stage May 1st Protests in Spite of Corona 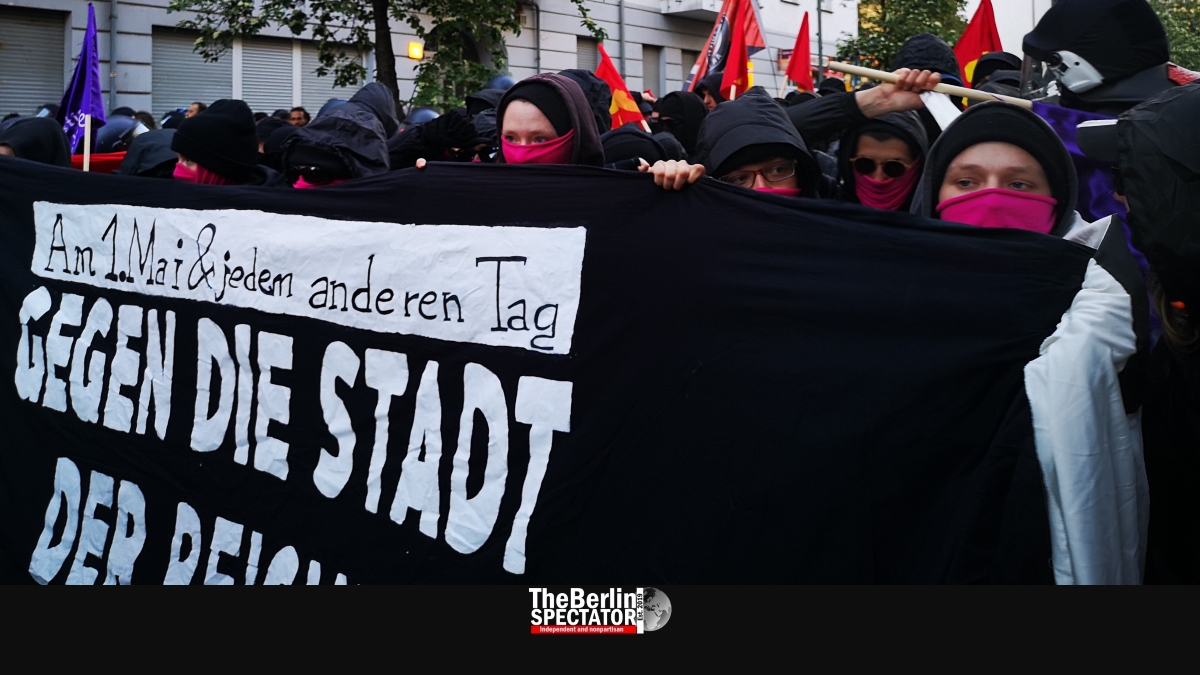 Even though the Corona pandemic threatens everyone, left-wing extremists are getting ready for their traditional May 1st protest. The Berlin Police Department is expecting quite a challenge.

Even before the Corona crisis hit, Labor Day, May 1st, was always difficult in Berlin. The Police Department usually needs help from the Federal Police and other federal states. The ‘Myfest’ for kids and juveniles does not pose any issue. Neither does the usual demonstration organized by unions and parties such as the Social Democrats, the Greens and ‘The Left’.

But the ‘Revolutionary May 1st’ rally is a problem. It is being staged by left-wing radicals who oppose pretty much everything, including the state they live in, even though it gives them the right to express their opinions and supports them in many ways. The participants are usually mummed and provoke the police any way they can.

The participants of the ‘Revolutionary May 1st’ marches are affiliated with former squatters and actual ones who are known for attacking police officers with bottles, stones and fireworks. Together, the far-left militants of Berlin pose a danger to the city.

Even the deescalation approach the police have been taking for quite a while now will not appease the radicals. “All of Berlin hates the police”, they usually chant. But repeating it over and over does not make that statement accurate. In 2019, the police prevented a dangerous escalation and said the protest had been relatively peaceful.

The truth was that it would have been the opposite of peaceful, had the police not reacted the way they did. A hundred individuals were arrested last year, thirty people were injured. In Berlin, that kind of May 1st is peaceful.

Now a new dimension called Corona needs to be included. The organizers say the pandemic would “influence our activities.” But “we will not have the state dictate the way our protest will look like”, it says on their revolutionary website.

There are plenty of things they intend to protest against, including “capitalist exploitation”, patriarchy, defense contractors, the conditions in jails, evictions of squatters, high rents, large real estate projects, low wages and the cancellation of “left-wing projects” in general.

All Over the Place

Their strategy is a decentralized protest in Berlin’s Kreuzberg district, meaning the participants will be all over the place. A route for the main rally will not be announced until it happens on May 1st. This aspect poses an additional challenge for the Police Department. They might have to choose an overkill strategy by posting dozens of officers at all bigger intersections. Of course they will not volunteer this kind of information beforehand.

But Berlin’s Interior Senator Andreas Geisel did say the infection protection of the population was the top priority. He reportedly stated he did not want May 1st to become the Ischgl of Berlin. Geisel was referring to the Austrian skiing resort Ischgl. At the beginning of the Corona crisis, many vacationers contracted the virus there.

The police intends to intervene persistently and prevent illegal gatherings. Berlin’s Police Chief Barbara Slowik stated, participants would be reminded of the Corona restrictions via loudspeakers. They would be told to leave the rally. According to Slowik, the officers will become active in case the protesters do not react. And the latter is a foregone conclusion.

Among the radical left in Berlin, there might be some who do not want street battles with police, but many of them do.

Before the Wall fell, West Berlin already had a violent version of May 1st. The radical left started taking things apart in Kreuzberg. Squatters, punks and other parts of the radical left organized a street fest which started turning violent. At the same time, certain groups did not think the unions did enough to advance workers’ and employees’ rights and tried turning the official May 1st demonstrations into a violent chaos.

In 1987, things turned bad. At that time, the radicals opposed a census in West Germany because “George Orwell is everywhere”. On May 1st, 1987, police increased tensions by raiding the offices of the umbrella organization for opponents of the census in Kreuzberg.

The annual city fest was peaceful at first, until frustrated radicals left the traditional protest and joined the party. In the afternoon of May 1st, 1987, stones were thrown at a police car, while another one was overturned. Some radicals blocked a street using construction trailers.

Police reacted by ending the street fest using bats and tear gas. That move lead to an additional escalation. At Oranienstraße, members of left-wing groups set up barricades of burning cars. Fire fighters who came to extinguish the flames were attacked. One of their vehicles was set on fire as well. A supermarket was looted and an ‘S-Bahn’ train station badly damaged. Once most participants of the rampage were either drunk or tired or both, Police forces ended that night of brutality.

As a result of what happened on May 1st, 1987, a special police force was founded by the conservatives who were ruling Berlin back then. Its purpose was to become active in comparable situations. Only two years later, the unit was disbanded, after its brutal approach had been criticized harshly.

Two years later, in 1989, the new center-left Berlin Senate wanted to show the conservatives how good they were at dealing with the May 1st situation, by choosing a deescalation approach. But it did not work either. Police needed to use force again, in order to end riots in Kreuzberg.

After the reunification, police had to deal with Marxist-Leninist groups and other radical left-wingers who did cause some trouble during the night leading up to May 1st several times, but things looked a lot better than in 1987. Since the new millennium commenced, only some outbursts of violence needed to be dealt with.

Those riots were not nearly as bad as in the 1980s. But in 2001, the May 1st protest was forbidden. With that measure, the violence level was supposed to be decreased further. But it had the opposite effect.