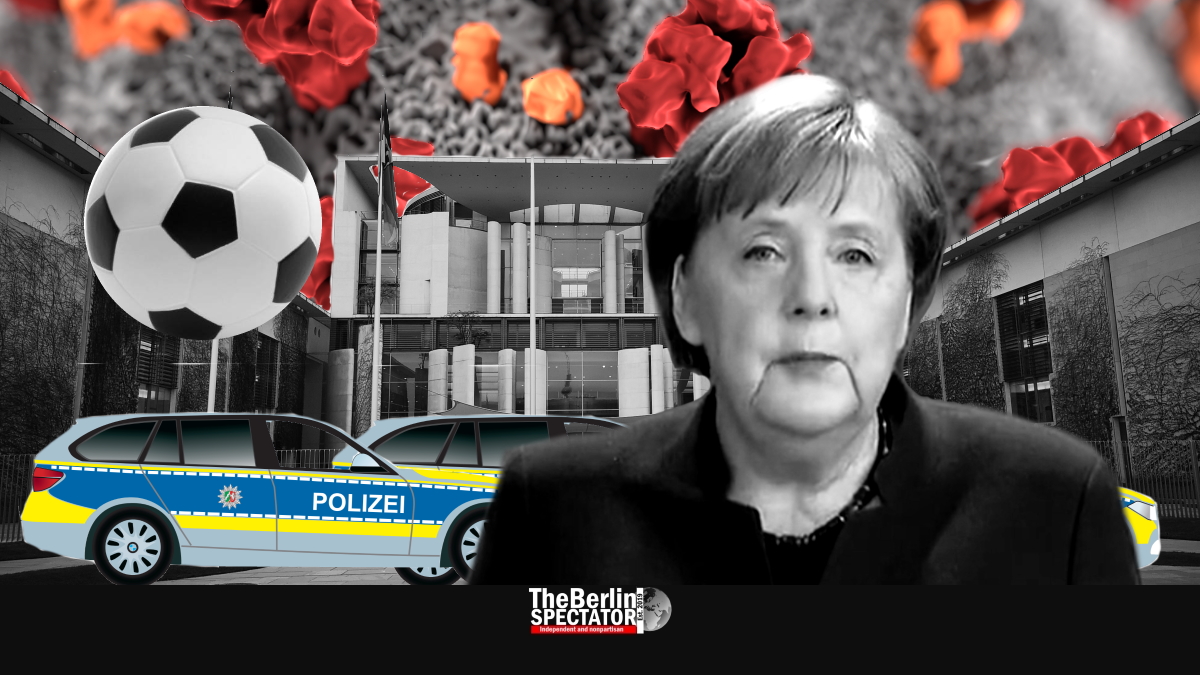 In Berlin, Chancellor Angela Merkel and the First Ministers of Germany’s sixteen federal states will be convening online again on Thursday. The only item on their agenda is Corona.

Angela Merkel and her colleagues from Germany’s provinces and city states were scheduled to discuss Corona, its implications and ways to fight it again today. While no decisions about an additional easing of the Corona restrictions are being expected, there might be good news for Germany’s many soccer fans.

The German Football League (DFL) said it was hoping for a “clear signal” from the Chancellor and her conversation partners. A restart of the first two soccer leagues is what the organization wants. The DFL knows there will not be matches with thousands of spectators on site anytime soon. That is why it is building its hopes on televised ghost matches in empty stadiums.

But, according to Merkel’s spokesman Steffen Seibert, there will be more deliberations than decisions, this time around. These online or telephone meetings do happen on a regular basis these days, so that the Chancellor and the First Ministers can react to new developments quickly. Depending on the latest numbers, they can lift bans or put them back in place.

Now that the federal government decided to prolong its worldwide travel warning until June 14th, 2020, Interior Minister Horst Seehofer wants to stick to controls at some of Germany’s borders. Those might be prolonged until May 15th, or until further notice. Seehofer intends to propose this approach today. The First Ministers of federal states located along the borders in question do have a say here as well.

So far, there had been a decision about having controls at the borders to Austria, Switzerland, France, Luxembourg and Denmark until May 4th. The borders to Belgium and the Netherlands continue to be open, but with an intensified surveillance.

On Wednesday, the federal government introduced yet another set of measures that are supposed to curb the Corona pandemic. Those include more Corona tests, reporting obligations and a bonus for employees at homes for the elderly, because of the strain they are experiencing on the job in the Corona crisis.

Each employee will receive a tax-free bonus of 1,500 Euro (1,629 U.S. Dollars or 1,306 Pounds Sterling). Two thirds will be covered by the nursing care insurances and the federal government, while the last third is supposed to be paid by the federal state and the employers.

State of the Economy

The bad news Berlin had to convey on Wednesday was the state of Germany’s economy. Commerce Minister Peter Altmaier said, because of the Corona crisis, the national output would be shrinking by 6.3 percent this year. But for next year, the government is expecting a growth of 5.7 percent.

Germany is expecting a 11.6 percent decline in exports for 2020, and a 7.6 percent increase in 2021. Imports will likely take a big hit as well. Altmaier expects a decrease of more than 8 percent. Big problems will be hitting the job market in the course of 2020 too. That development has already begun.

Extremists to Stage Protests in Berlin

While the federal government is dealing with long-term problems, the Berlin Senate was forced to look into short-term ones. Tonight, and especially tomorrow, left-wing extremists are getting ready to stage their traditional May 1st protests, in spite of the Corona rules. According to those, protests with a maximum of 20 participants may take place with special permissions.

The ‘Revolutionary May 1st’ movement wants to demonstrate in a decentralized way, all over Berlin’s Kreuzberg district. Because this group’s rallies often turn violent, the Berlin Police Department ordered reinforcement from the Federal Police and other federal states. A total of 5,000 officers in riot gear will be spread across the endangered areas, ready to go at a moment’s notice.

Berlin’s Interior Senator Andreas Geisel and Police Chief Barbara Slowik have said that violations of the Corona rules would be dealt with if those who ignore them do not react to verbal warnings conveyed through loudspeakers. Before the Corona crisis, the European Labor Day on May 1st also included peaceful protests organized by parties and unions. Only the “revolutionary” protests staged by radicals are the ones that often include violence.

In the meantime, the number of confirmed Coronavirus cases in Germany has exceeded 160,000. In the early morning it stood at 161,539. So far, 6,467 persons have died from the respiratory disease caused by the virus. More than 120,000 individuals who used to be infected with Corona are now cured.