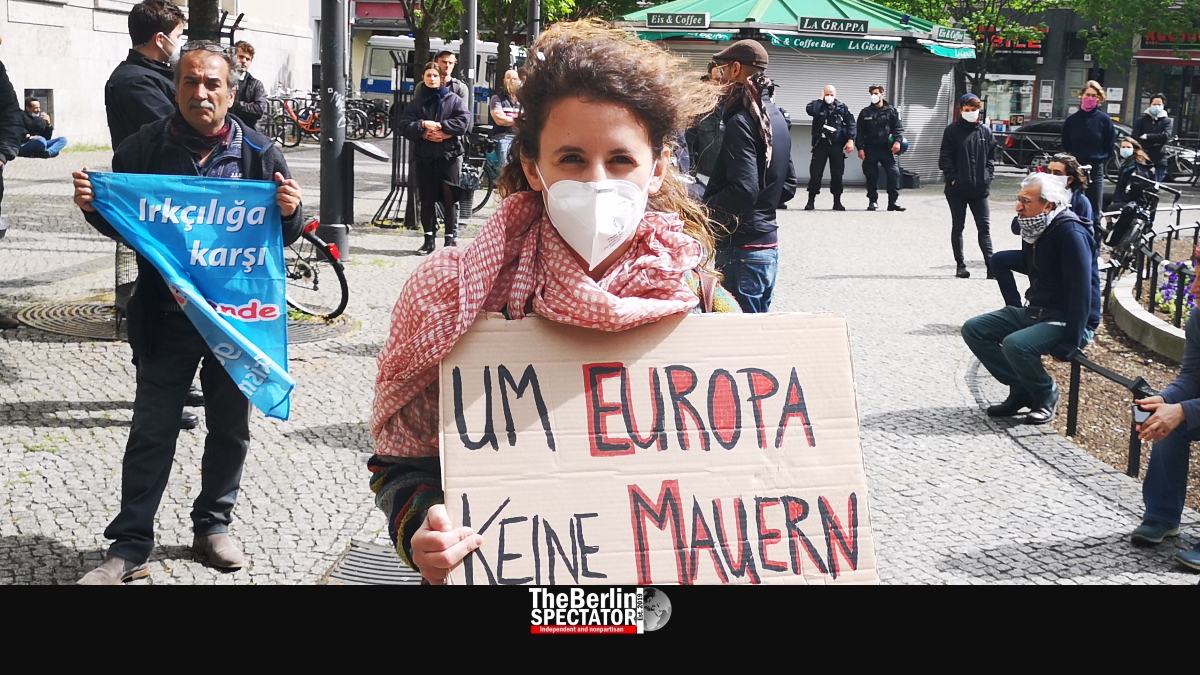 Up to thirty small and peaceful protests took place in Berlin today. Those were organized by unions, left-wing parties and private citizens. Because of Corona, the Berlin police made sure not more than 20 people took part in each rally.

In Berlin, the day started with a variety of small demonstrations. Those who joined them called for more equality on the job market, for civil rights, for international solidarity and “clean schools and good work”. “The rich should pay”, the title of yet another protest read.

At several protests, better pay for nurses and caretakers was called for. In the Corona crisis, almost everyone in Germany agrees with that kind of demand, throughout the political spectrum.

At Berlin’s Hermannplatz, an infamous square between the Kreuzberg and Neukölln districts, and a few steps down the street, in front of Neukölln city hall, ‘The Left’, a party represented in the Berlin Bundestag, staged two demonstrations with 20 participants each. This is the maximum number of people any protest can consist of according to the Coronavirus rules.

Speakers called for an end to “singling out” Arab family clans, which the Berlin authorities are after because of their criminal activities. “Get the rents down and the wages up”, it said on a sign. Another one read “Humans are more important than profit!”. A lady held a self-made sign saying “No Walls around Europe.”

Police officers were watching each one of these registered, legal protests. At the same time they banned the so-called ‘Hygiene Protest’ again. For five weeks, conspiracy theorists, anti-Semites and other haters have staged this one at Rosa Luxemburg Square.

Some of the participants deny Corona exists. Others blame “the Jews” and America for spreading it. Each time this demonstration takes place, more people want to join. Hundreds of police officers have kept on preventing large gatherings, also by arresting individuals who ignored both their orders and the Corona rules. On Friday afternoon, the first arrests of the day were reported here.

Berlin’s Interior Senator Andreas Geisel announced, police would be stricter with the illegal ‘Hygiene Protest’ on May 1st and 2nd. But their biggest problem are extremist left-wingers who announced “decentralized protests” that are supposed to take place tonight. “Revolutionary May 1st” protests in Berlin have a history of violence. Even in pre-Corona times, thousands of police officers had to protect the city from those radicals every time.

The authorities fear things might get out of hand again this time, also because the Corona rules need to be enforced. Because the Berlin Police Department just does not have enough people for this endeavor today, it ordered reinforcements from other federal states. Tonight, the Federal Police will be in business as well.