Santana, Meditation and Carrots: Hamburg’s Communes of the 1970-s 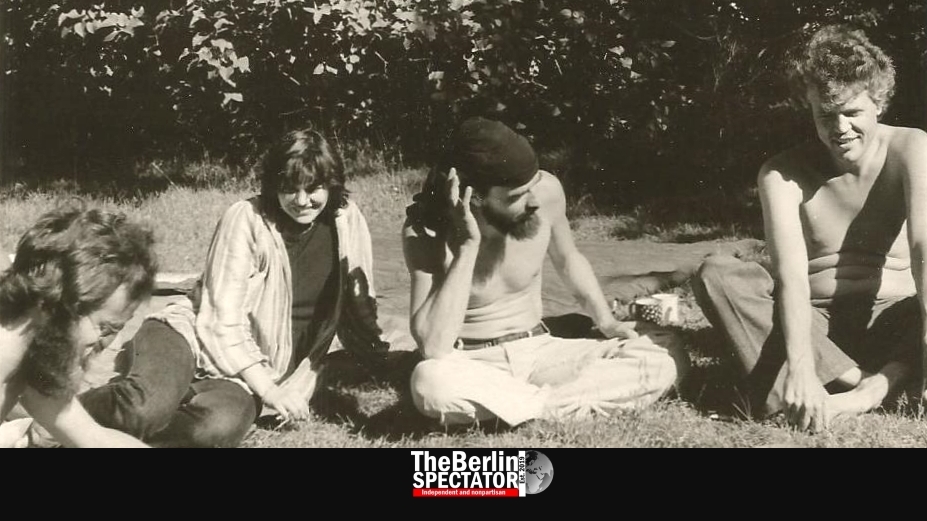 In the late 1970s, countless students and young professionals lived in German communes. A new, progressive lifestyle was followed there, which the neighbors did not agree with.

On a windy Saturday in the fall of 1977, the commune at Kritenbarg, a street in Hamburg’s northern Poppenbüttel quarter, welcomed lots of guests. They mostly came from other communes all over the city. Members of a Rock band which sounded a bit like Black Sabbath had just set up their instruments and PA on a make-shift stage in the garden.

This party was about celebrating this commune of 13 people, including four children. It was about celebrating their progressive, modern lifestyle. They rejected the bourgeois approach many others were following in West Germany at the time. Nine years after the start of the student revolution, love and flower power were still very much alive.

Some seven minutes into the first song the band played, the police showed up. The officers did not have to drive too far since the police station was only a quarter mile away. As it turned out, residents of an apartment block built on top of the ‘Alstertal Einkaufszentrum’ mall had complained about the noise.

Even though deescalation was something the German police did not really care or know about during those times, the cops on site wanted to find a compromise. They knew the party had to go on. But they also expected more trouble from residents in that high-rise across the street. So they stood there and made sure nobody would turn up the volume on the PA anymore. Also the band’s performance was cut short.

The Kritenbarg commune was made up of working adults with and without kids, students and hedonists. In this case, judging from the outside, things seemed to work out quite well, without constant conflicts. The members lived in a 9-room house tolerant owners had rented out to them.

A few kilometers further north, at Haubenlerchenweg, a small street with single-family homes and mostly neatly trimmed gardens, one house was different. The garden looked partially ragged. An old Volkswagen Beetle was parked under the two big firs in front of the house. Also there was a big sticker on the front door with a smiling sun, saying “Nuclear power? No thanks”.

Yes, members of this commune did take part in protests against nuclear power plants, including the one in Brokdorf, a 1,480 megawatt reactor the construction of which had started in 1975, two years before. But that sticker mainly had another purpose. It was supposed to show the neighborhood this place was different, and convey the message that like-minded people were welcome. It did serve its purpose.

In the neighborhood, some residents looked at the commune with disgust in their eyes. Its members seemed suspicious to them and they rejected this lifestyle. Most male commune members wore long beards like Marx or Castro. Some of the women loved red Henna hair color. And the kids’ hair was far too long. Yes, those were the days when long hair was indecent and reserved for “revolutionists”, “good-for-nothings”, “freaks”.

The owner of that house in Haubenlerchenweg, a headmaster, was very tolerant indeed. He did not see why “young people who found their own lifestyle should not be allowed to try new forms of living together”. This kind, elderly man just did not want the neighbors to be disturbed. Anything else was fine.

So he signed the lease with a teacher who would now be the main tenant, meaning she would be responsible and pay those 900 Deutschmarks per month. But would everyone else act in a responsible way too? That was the big question. And the answer was no.

Some of the inhabitants of this big white house were students. They wanted to become natural health professionals and were into homeopathy. At times, they went to homeopathy congresses. Some of them also liked smoking weed while listening to Chick Corea, Stanley Clarke and Frank Zappa’s ‘Apostrophe’ album all night long.

As it turned out, that kind of activity was not compatible with the lifestyle of the main tenant and others who had to get up early in order to work. There were lots of conflicts. But this was only the beginning of trouble.

Some of the students increasingly got into yoga. They frequently visited ‘Lorien’, some kind of an alternative business in Hamburg’s city center which offered yoga classes and sessions, meditation and vegetarian food. So, visitors could come along, consume half a carrot and a salad leaf, and get enlightened afterwards.

One art form those yoga enthusiasts imported to the Haubenlerchenweg commune was something called ‘dynamic meditation’. It involved sitting there cross-legged and shouting one’s heart out. This kind of meditation was supposed to release all of the “bad energy” the person had. Sure.

On a nice spring day in 1977, a few inhabitants decided to move their daily meditation activities to the garden. First they played Indian meditation music. Then they did that ‘dynamic meditation’ thing. The neighbors were not exactly enthusiastic about what was going on. There was trouble in paradise.

The guy who lived in the next house on the right started playing military marches at full volume, while the other neighbor stood there at the fence. His shouting sounded very different from that ‘dynamic meditation’, but both ways may have had the same effect. When the tolerant landlord was informed about the incident, even he was angry. This was one of the occasions when he threatened to cancel the lease.

A year later, that incident had long been forgotten. Rüdiger (all names changed), a new member of the commune, saw an excellent opportunity to try his new Bose loudspeakers in an outdoor environment, namely the big commune party. So he carried them downstairs, one by one, and set them up in the garden. He also brought his nice Akai amplifier. Several other residents contributed parts of their enormous record collections.

Show Put On for Cops

Once the first guests showed up, the party commenced. Creedence Clearwarer Revival came out of those speakers, the Average White Band, parts of Santana’s excellent ‘Borboletta’ album and other great sounds. But not for long. The cops showed up at the door. Melanie knew how to welcome them. She took off her blouse, in order to open the door topless.

The cops may have liked that show, but insisted on more quietude anyway. After they came along a second time, the party had to be moved inside the house. And even there it was too loud.

Melanie and Pete were a couple, or they wanted to be, but somehow they could not have sex together, which is why she had an extra boyfriend. With him it worked a lot better, but she would never get rid of Pete. Lothar and Gesine had a lot of sex in his basement room, in between meditations. They were not really together, but who cares?

Yet another commune member, Viola, a single mother, fell in love with Greg, an alcoholic and ex-con who had been looked after by Jens, another resident who was about to become a Lutheran pastor and who had worked with challenged individuals in one of Hamburg’s jails.

One day, Christine came to live in that commune. As some of the other members would find out soon, Christine was actually not her real name. It was unclear whether she was part of the radical left-wing terrorist organization Red Army Faction (R.A.F.) or what other reason she might have had to conceal her name.

Since the R.A.F. around Andreas Baader, Gudrun Ensslin and Ulrike Meinhoff was murdering people and taking them hostage, especially in 1977, the police checked almost all communes. They believed there was a lot of sympathy for the R.A.F. in these circles, and unfortunately they were generally right. But they did not find anything suspicious in Hamburg’s Poppenbüttel district. The investigators did not even show up at this particular commune.

Everyone had to contribute. Even the children cooked once a week, or at least they were supposed to. Because of those yoga-loving vegetarians, dinner would usually consist of carrots, rice and all kinds of dips and sauces, along with the smoke coming out of Pall Mall cigarettes. And everyone was supposed to clean part of the house. The cleaning plan was carefully orchestrated, like everything else on these premises.

The living room everyone shared was painted in dark red, including the ceiling. One member painted his room in black. It took about eight layers of white paint to get rid of it when he moved out.

One day, Melanie and Pete flew to the Indian town of Poona. They just needed to meet Bhagwan Shree Rajneesh and the rest of his cult. It was about meditation and love. But Rajneesh also loved Rolls Royce vehicles. He had quite a few of them, financed by his cult members. When Melanie and Pete returned to Hamburg, they suddenly had new names: Vihaan and Fagun (even these names were changed in this feature).

These Hamburg communes, and similar places all over Germany, were mostly peaceful. Some political movements developed in communes, including the ‘Alternative Liste’ which became part of the ‘Greens’ a bit later. They even made it into the Berlin Bundestag.

Children growing up in communes, like the one in Haubenlerchenweg, may have gotten an overdose of what was considered political correctness during those times. Some of them are far more conservative today.