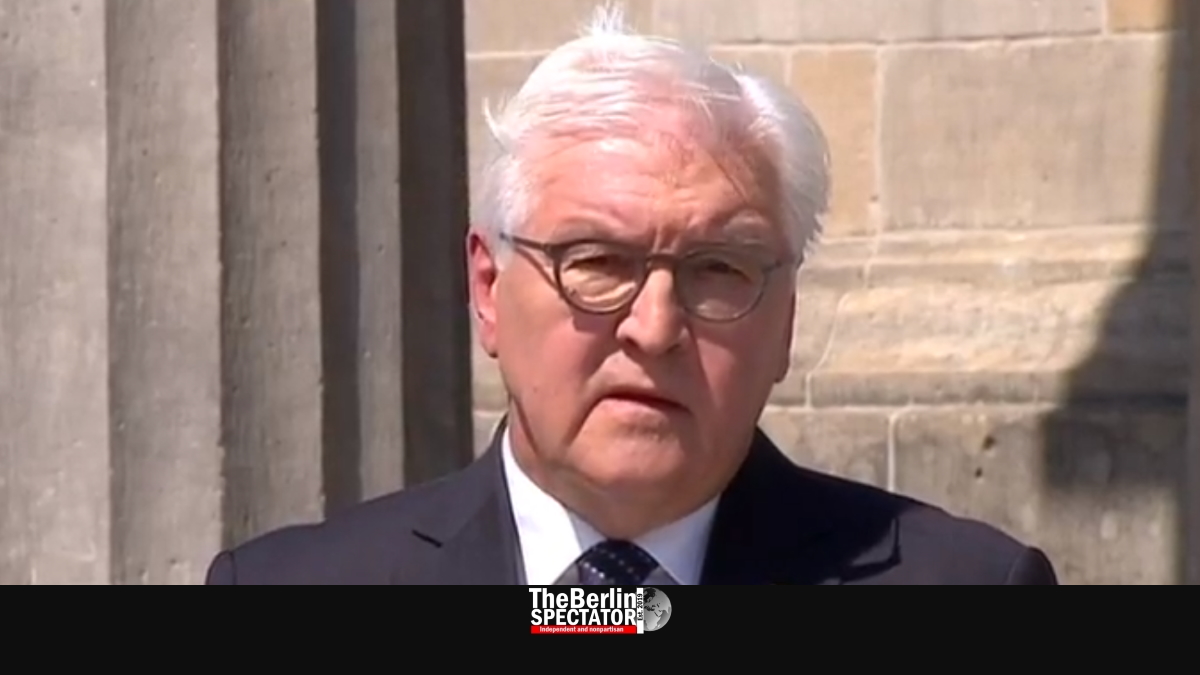 During a commemoration event for the victims of Nazi Germany’s crimes, the President of its successor country, Frank-Walter Steinmeier, held an impressive speech. There was no end to remembrance, he told the nation.

In Berlin, May 8th, 2020, the 75th anniversary of the defeat of Nazi Germany, is an official holiday. In front of the Neue Wache, Germany’s memorial dedicated to war victims, President Frank-Walter Steinmeier, Chancellor Angela Merkel and other high-ranking dignitaries laid down wreaths.

The End of Nazi Tyranny

As he did earlier this year in Yad Vashem and Auschwitz, at the 75th anniversary of the Nazi death camp’s liberation, and at the Berlin Bundestag, Steinmeier found the right words. Because of the Corona pandemic, the event was much smaller than it would have been.

“May 8th was the end of the Nazis’ tyranny, the end of bombing nights and the end of unprecedented German war crimes and the Shoah”, Steinmeier stated. “In Berlin, where the war of extermination was contrived and set in motion, we wanted to commemorate [the victims] mutually, with representatives of the Allies in West and East, with partners from all parts of Europe who suffered back then, and with survivors of the German terror and their descendants.”

The German President also said Germany had originally invited adolescents from all over the world for a commemoration “with those who gave this country a chance for a new beginning.”

“On May 8th, Germany was besieged militarily. It was on the ground. We had made an enemy of the entire world. Today we have to commemorate [the victims] on our own, but we are not alone.” Steinmeier said now, in the 30th year after Germany’s reunification, the country was a stable democracy in a united Europe.

The day of liberation was also the day of thankfulness, he stated. But the liberation had not immediately taken place in the heads and hearts of the Germans. “This is how deep the country was entangled in its guilt.” The reconstruction of Germany had only been possible because of the generosity of its former adversaries.

Germany had needed decades to come to terms with its past, Steinmeier said in Berlin. During those years, its democracy had matured.

Germany: Lufthansa Jet Bound for Chicago Returns Because of…

‘There is No End to Commemoration’

“There is no end to commemoration”, the President stated. “Only because we Germans are looking our history in the eye, the peoples of the world have given us new trust. Germany’s history is a broken history. It includes responsibility for the murder and the sorrow of millions.”

“Those who want to put an end [to coming to terms with this part of German history] devalue all the good we have achieved”, Steinmeier continued. By saying to, he addressed revisionists and the many right-wing radicals in Germany. Commemoration was not a burden, but not commemorating [the victims] was. Remembering was not a disgrace, but not remembering was, he said.

Steinmeier said that, after World War II, Germany had said “never again”. Now Europe needed to be held together. “If Europe fails, the ‘never again’ will fail as well”, Steinmeier told the Germans today.

‘Liberation Challenges Us Every Day’

He also stated the liberation would never be completed. “It challenges us every day. But today, we need to liberate ourselves from hatred, agitation and from contempt against democracy.” Those who spread the latter were yesterday’s forces in new garment. Germany needed to liberate itself from those dangers.

May 8th, 2020, was taking place in a time of uncertainty, Frank-Walter Steinmeier said. He asked the Germans to commemorate the victims of national socialism in quietude. “Think about what May 8th stands for in your life and deeds.”

President Steinmeier concluded his speech by saying May 8th of 1945 had not been the end of the liberation. “Freedom and democracy are its mission. Our mission.”

Originally, a much bigger memorial event had been planned, in front of the Reichstag, with guests from the four Allied countries. Because of Corona, the big commemoration had to be cancelled. Only Steinmeier, Chancellor Angela Merkel, the presidents of the Bundestag, the Bundesrat and the Federal Constitutional Court came to Berlin’s Neue Wache.

Corona in Germany: Cautious Optimism and Fears of a Winter Wave