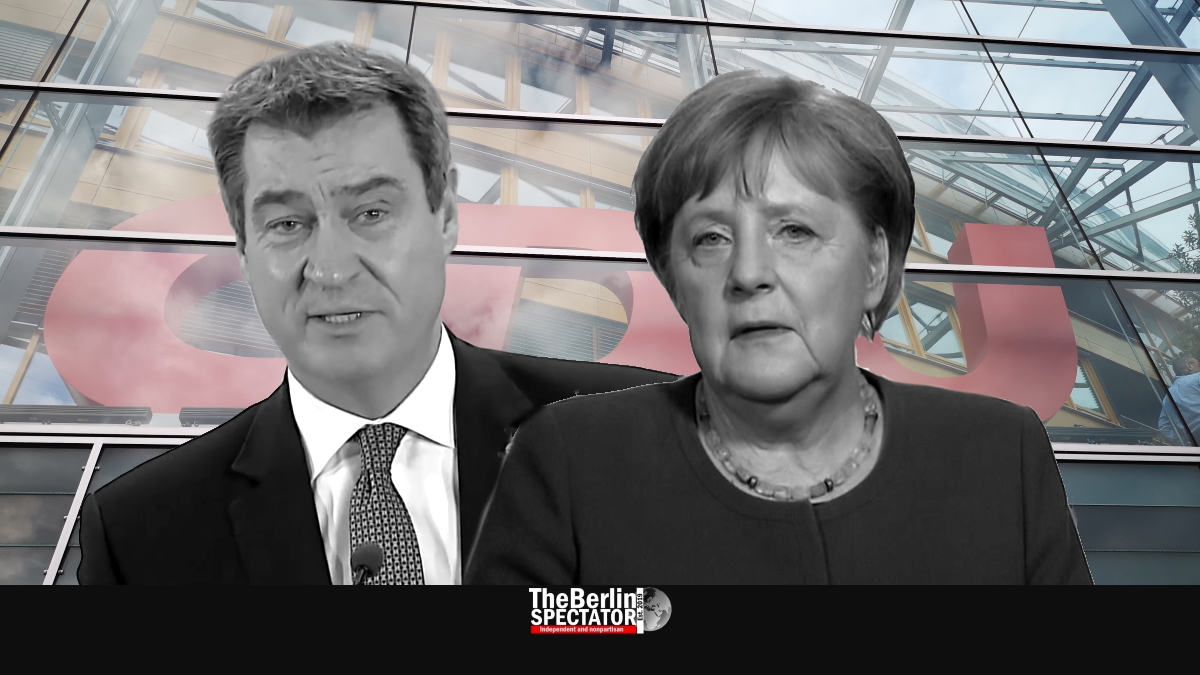 In three years, Chancellor Angela Merkel’s CDU and First Minister Markus Söder’s CSU have not been this strong. According to a new poll, 40 percent of all German voters would choose one of those parties if there were general elections today.

Nowadays, being able to count on this kind of support is almost unnatural. Forty percent is the kind of share big-tent could get decades ago, before the political landscape in Germany changed. With their 15 percent, the Social Democrats have lost the major party status. One big force is left, namely Merkel’s Christian-Democratic Union (CDU) and its Bavarian version CSU.

This outcome of a poll conducted for the German RTL/ntv TV network is astonishing. It gives Merkel and the two conservative parties their best result in three years. Within one week, their support increased by 2 percent. It is going through the roof. Of course the votes the conservatives would get do come from somewhere, meaning other parties are losing support.

Mrs. Merkel’s coalition partner, the Social Democrats (SPD), are still drowning. They would reach 15 percent if this was election day, a catastrophic result. Before the Corona crisis hit, the Greens were stronger than ever. They even overtook their former coalition partner SPD with a support of far more than 20 percent. Not anymore. They have 15 percent now. And ‘Die Linke’ (‘The Left’) stands at 7 percent.

No Majority for Center-Left Coalition

This means there is no majority for a center-left coalition anymore. The total support for the SPD, the Greens and ‘The Left’ combined is 37 percent, less than Mrs. Merkel and the CSU’s chairman Markus Söder can count on. The conservatives would be able to form a government coalition with the SPD or the Greens. Their most natural coalition partner, the liberal FDP, is too weak with 6 percent of support.

Since the beginning of the Corona crisis, the extremist right-wing ‘AfD’ has lost about a third of its voters. They are looking at 10 percent right now. In the federal states that belonged to former East Germany, they are a lot stronger than in the west, but their nationwide performance is weak. This is one of the few positive effects of Corona.

Many Germans trust Angela Merkel. They approve of the way she has handled the Corona crisis so far. The same applies to Bavaria’s First Minister Markus Söder. Many Germans want him to be Merkel’s successor in the Chancellery.

CDU and CSU even overtook the Greens as the party with the most support from young Germans, aged 18 to 44. And they are closing in on the Greens in the age group of 18 to 24-year olds too. The sky is the limit. Of course everyone at the Konrad Adenauer Haus, the CDU’s HQ in Berlin, knows things will not always look this way.

Still, Mrs. Merkel and her CDU are being seen as an anchor of stability in Germany. Forty-seven percent of all Germans believe CDU and CSU are the parties that deal with the country’s problems the best way. Only 6 percent believe the SPD is the right party to resolve issues.