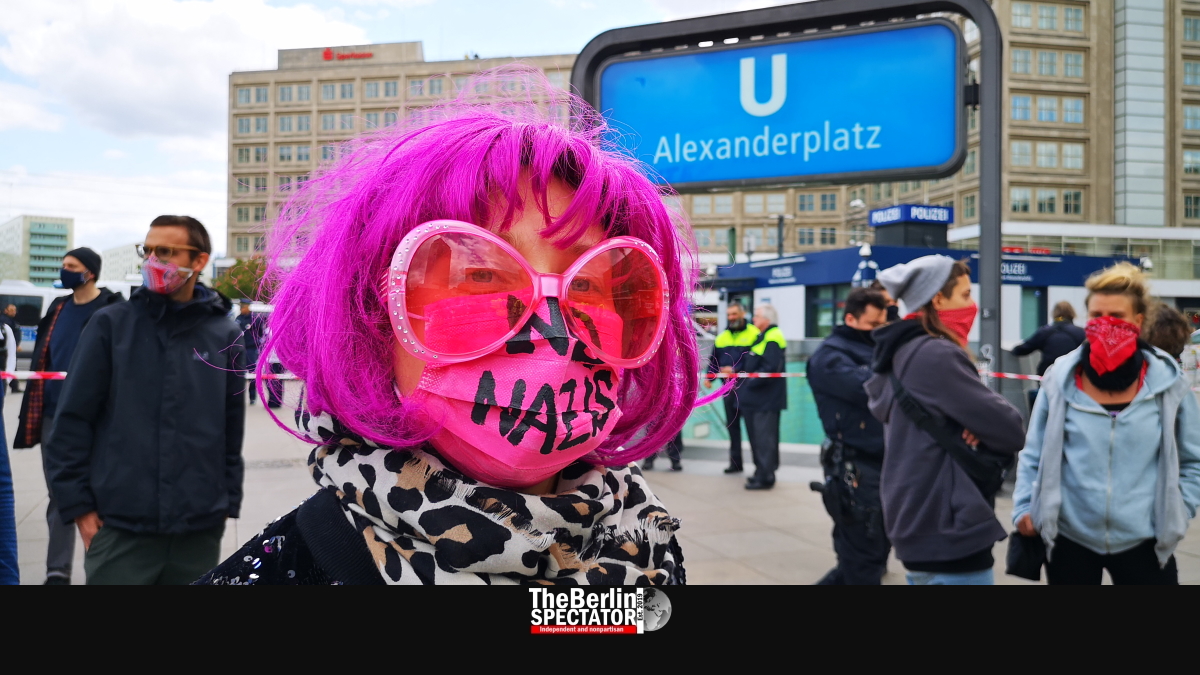 In Berlin’s eastern city center, police officers kept several protests under control on Saturday, by making sure they did not exceed the maximum number of participants. It is fifty, according to Berlin’s version of the Corona rules.

The weekly ‘Hygiene Protest’ of conspiracy theorists did not really take place this time. Police blocked access to Rosa Luxembourg Square, its usual location. They arrested some individuals who tried to get to the square while refusing to follow orders regarding the distance they needed to keep.

In the past weeks, Nazis, left-wing radicals, other haters and deniers had taken over Rosa Luxembourg Square every Saturday. Some of them disputed the existence of the Coronavirus. Other blamed the Jews, America or Bill Gates for the pandemic. Extremists of different kinds had tried to use those events to their advantage.

This time, about 12 people were part in a counter protest in front of the ‘Volksbühne’ theater. They rejected those weird theories and any kind of hatred and sang songs. Due to the police blockades, they hardly had any audience though. Some conspiracy theorists made it to the square later in the afternoon.

At one of the access streets to the square, protesters held copies of Germany’s constitution in their hands while they tried to get through. One middle-aged man asked police officers why exactly he had been sent away from the location and what the legal basis was. The message those protesters wanted to convey is that, to their opinion, the restrictions designed to slow down the spread of the Coronavirus are illegal.

A mile further south, at Alexanderplatz, the largest square in Berlin, several registered protests took place. In front of the Galeria Kaufhof department store, a few dozen people demonstrated against hatred and extremism, but also against the police. “Stop the armament at the police” a banner said, even though there is no armament at all.

A few steps away, at Berlin’s famous World Clock, participants of another small protest danced to techno music. A sign attached to their portable stereo said Corona had been a “false alarm”. Even more protests, a total of nine of them, approved and unapproved ones, were supposed to take place on and around Alexanderplatz. But in several cases, no protesters showed up.

Last week, 1,200 people had gathered at the same square illegally. That is why police set up crowd control barriers this time. A thousand officers, both from the Berlin Police Department and the Federal Police, were on site. A spokesperson told The Berlin Spectator the police had looked for large gatherings in the early afternoon without finding any.

But their colleagues warned people in a crowd of spectators to keep their distance. Several announcements were made through loudspeakers mounted to a police vehicle.

At Berlin’s Reichstag, several hundred protesters showed up for yet another rally, one against the Corona restrictions, later in the afternoon. They had followed an invitation by TV chef Attila Hildmann. It was not his first demonstration of this kind. When more than 50 people tried to join the protest, police cleared the area. Several participants were arrested.