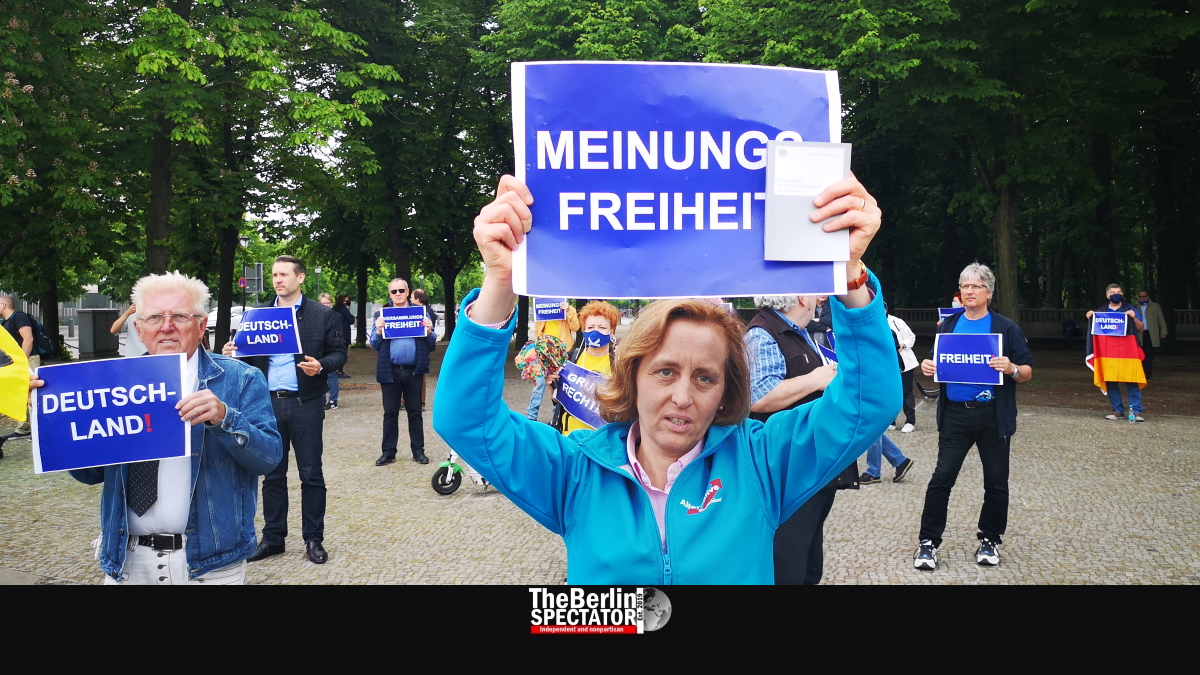 In Berlin, almost forty protests took place on Saturday. Extremist right-wingers demanded freedom of speech, ‘Citizens of the Reich’ denied the existence of Corona, and left-wingers demonstrated against Nazis.

On Saturday it was hard to keep track of all rallies that were registered in Berlin. At Brandenburg Gate, the extremist right-wing party ‘AfD’ (‘Alternative für Deutschland’) staged as many as four separate protests because the maximum number of participants per demonstration is fifty, according to the Corona rules. This way, 200 party members could take part.

The most prominent one was Beatrix von Storch, one of the ‘AfD’s deputy floor leaders at the Berlin Bundestag. She was holding a sign saying “Freedom of speech”, meaning the ‘AfD’ used freedom of speech to demand freedom of speech. A colleague of hers said it was wrong that the Corona rules restricted the right to protest. Local ‘AfD’ members were on site too.

Just across the street, a bunch of fundamentalist Christians held signs saying “Jesus loves you” while singing songs. On Saturday, they were the only ones whose performance was not related to Corona or right-wing extremism.

‘Citizens of the Reich’ Rally

At Berlin’s Victory Column, a rally organized by self-proclaimed ‘Citizens of the Reich’ did not last too long. Shortly after 12:00 noon, the event already had more than 100 participants. Police ended it for that reason. Sixty people were temporarily detained on site, while their IDs were checked.

Most ‘Citizens of the Reich’ have self-made identity documents by a ‘German Reich’ which has not existed since the Allies finally defeated Nazi Germany in 1945. The ‘Reich’ radicals do not acknowledge the Federal Republic of Germany or its authorities. Berlin’s latest intelligence report lists them as a danger to democracy.

At Rosa Luxembourg Square, several left-wing groups protested against Nazis. A speaker for one of them rejected the latest statements by prominent conspiracy theorists like Attila Hildmann, a TV chef who has become one of their main voices. Some left-wing groups also criticized antisemitic tendencies among those who deny the Coronavirus exists.

At Alexanderplatz, one of Berlin’s main squares, several protests were registered as well. Both the Berlin Police and the Federal Police were on site. They made sure none of the events had more than fifty participants.

Yet another demonstration took place between the Chancellery and the Reichstag. Here, another left-wing organization slammed conspiracy theorists for their dangerous approach. Just like most other protesters in several parts of Berlin’s city center, they hardly had any audience. Some Berliners who seemed to be taking walks stopped for a minute to listen to the demands the demonstrators made.

Hundreds of police officers were ready to react to any provocations at a moment’s notice at several locations. Another protest organized by Attila Hildmann himself commenced at 5:00 p.m. CEDT. He was arrested by police officers a few minutes into the event for not adhering to the distance rule, after being warned several times. He was released shortly after.