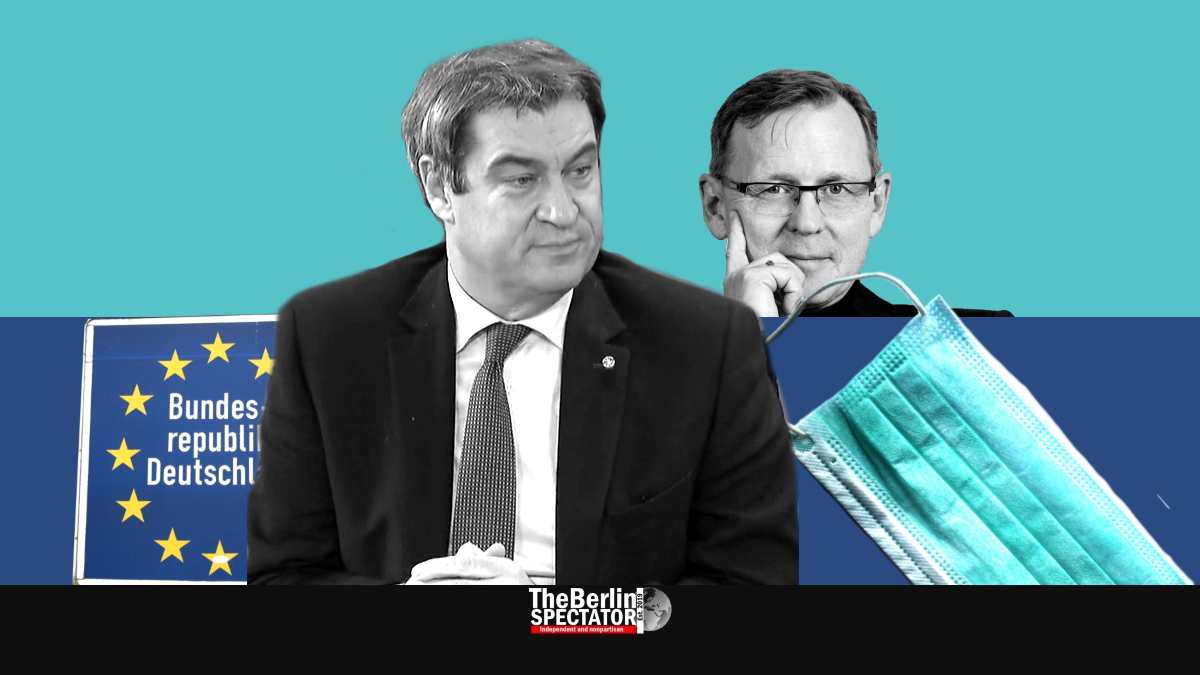 In Germany, Thuringia’s intention to drop the main Corona rules has led to a big controversy. Neighboring Bavaria even threatened “counter measures”.

The times of unity in Germany are definitely over. During the first two months of the Corona crisis, everyone agreed with the necessity to implement a semi-lockdown and strict contact rules. Not anymore. Since the First Minister of Thuringia, Bodo Ramelow, announced he intended to cancel the main Corona rules, a big argument has been rocking the country.

Bavaria’s Interior Minister Joachim Herrmann just threatened Thuringia with “counter measures”. In an interview with the ‘Funke Mediengruppe’, he said Ramelow’s proposals were irresponsible. Bavaria would closely monitor the situation in Thuringia in order to be able to “counteract”, Herrmann stated, without specifying what kind of activity he had in mind.

“We will definitely not just stand back on the sidelines while Ramelow recklessly destroys our successes in the fight against the dangerous Coronavirus”, Herrmann was quoted saying. His boss, First Minister Markus Söder, had said Thuringia’s intentions were a “fatal sign” and asked Ramelow to reconsider his plan.

On Sunday, Bodo Ramelow, the only First Minister in Germany who is a member of the far-left party ‘Die Linke’, had announced he wanted to “end the general lockdown”. There would not be Corona rules for the entire federal state, but local ones only. Ramelow’s cabinet will be discussing things today.

In an interview with ZDF television, Söder demanded a prolongation of the contact restrictions until July. He said the distance and protective mask rules were vital. Earlier, the Chancellery in Berlin had prepared a plan according to which those rules will remain in place until July 5th, 2020. Later, the date was changed to June 29th. Söder said he supported the plan.

According to Markus Söder, politics should not persuade people of a “false normality” or “suspend the entire rulebook”. As long as there was no medication or vaccination against Corona, Germany was “walking on very thin ice”. In the meantime, Saxony intends to follow Thuringia by getting rid of general Corona rules by June 6th.

The city state of Berlin might move the opposite way. For the first time, one of its ‘Corona traffic lights’ changed to red. That is because the Corona reproduction number reached 1.37. It is supposed to show a value below 1. Berlin’s Health Senator Dilek Kalayci said on Monday, the trend might be changing.

Travel Warning to be Lifted

On the other hand, the other two important indicators, namely the actual number of new infections and the capacity of vacant ICU beds at Berlin’s hospitals, look promising. According to Berlin’s new ‘Corona traffic light system’, there is a need for action once two lights turn red. So far there is one.

The prospects for the upcoming summer vacations are another aspect that is being discussed a lot in Germany. Now the federal government intends to lift the global travel warning for 31 states on June 15th, 2020, if the Corona situation allows this step. They are all 26 partner countries in the European Union, the United Kingdom as well as Iceland, Liechtenstein, Norway and Switzerland.

Cabinet to Decide on Wednesday

A draft plan which contains those measures will reportedly be approved by the cabinet as soon as tomorrow. Foreign Minister Heiko Maas had put in place the global travel warning in mid-March, because of the danger posed by the spread of the Coronavirus. When this step was taken, Germany itself was a high-risk country from the perspective of the rest of the world.

The number of Coronavirus cases in Germany is 180,600, while far more than 161,000 formerly infected persons are cured. There have been 8,309 Corona-related deaths.