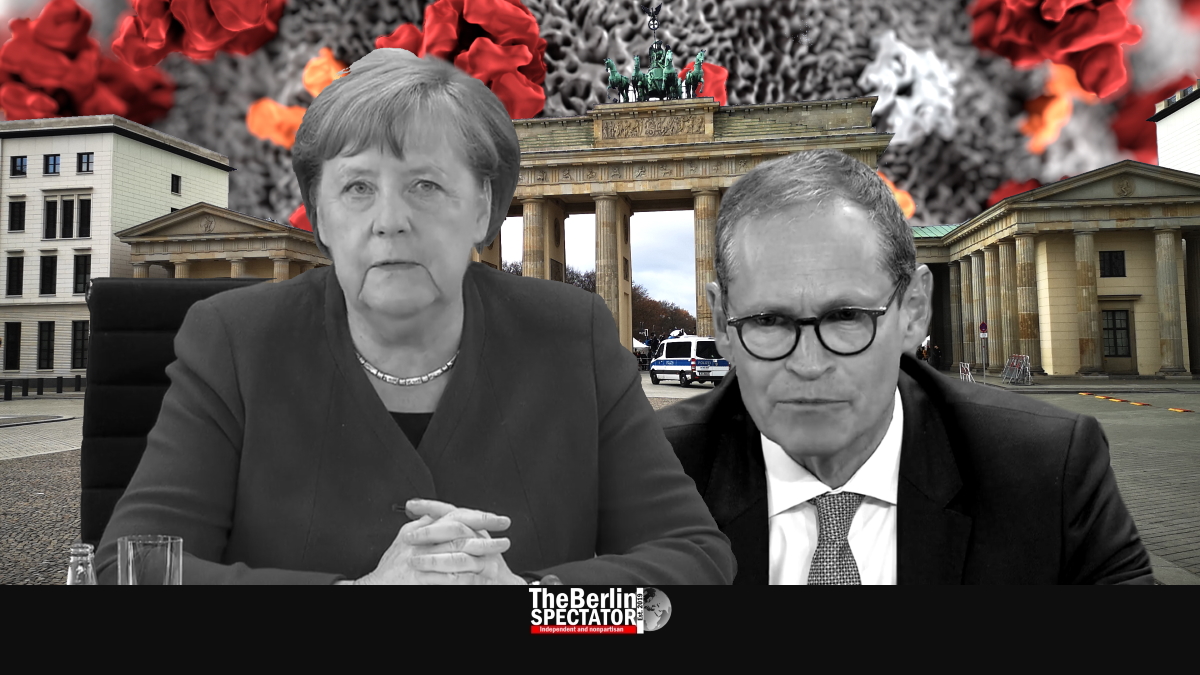 Chancellor Angela Merkel made clear she insists on a national consensus in Germany on the main Corona rules. The federal government and the federal states needed to work together.

Angela Merkel appeared in front of the Press with Berlin’s Governing Mayor Michael Müller after they had been part of talks with the First Ministers of all eastern German states. The Chancellor used the opportunity to call for common rules in this crisis. Consideration for each other’s health was important.

“I fully agree that everyone works on their own authority”, Merkel said, referring to the federal states. In Germany, they do have a lot of decision power. “But to me as Chancellor and to the entire federal government it is important to have a consensus on fundamental questions.”

That way, Mrs. Merkel indirectly criticized the state of Thuringia, the government of which had announced it wanted to dump all Corona rules in early June, before backtracking a little. This position had led to a big controversy and arguments between some First Ministers.

Chancellor Merkel made clear she wanted a common framework of the kind everyone had already agreed to. “This means keeping a distance of 1.5 meters (5 feet) to each other, it includes covering one’s mouth and nose in public transport and at places where the safety distance cannot be kept”, she stated.

Germany’s head of government also insisted on keeping the rule according to which counties and towns need to take action if and once their number of infected persons per 100,000 inhabitants exceeds certain values. The federal states had previously agreed to all rules Merkel mentioned. On Tuesday, they had reached a consensus on keeping the existing contact restrictions until June 29th, 2020.

On Thuringia, Angela Merkel said the statements from there had been “somewhat ambivalent”. Keeping one’s distance was an obligation. There needed to be safety for people who were affected by the virus most. Consideration for each other enabled everyone to take part in Germany’s social life. Otherwise there could be “a situation in which the strong get their way while those who are a bit weaker hardly have the courage to be out on the street.”

Berlin’s Governing Mayor Michael Müller agreed with Merkel. He said he was worried about the fact that there were people who had decided how to deal with the pandemic on their own, without considering the effects of their behavior on others. These individuals “go to work, they take their child to the kindergarten or use public transport”, Müller said, highlighting the danger of a further dissemination of the Coronavirus.

Müller addressed the growing number of conspiracy theorists and deniers who do not believe the Coronavirus exists, by saying the situation in Germany was relatively good right now because of the restrictions that had been put in place, not in spite of them.

Chancellor Merkel stressed that this was still the beginning of the Corona pandemic. “We do not have a vaccination or a medication so far. But we have managed to have more control”, she stated. On the other hand, recent local outbreaks of the virus had shown how quickly there could be new infections.

The Corona pandemic had turned everything upside down, Angela Merkel said. Therefore, the responsibility should not stop at national borders. Europe could arise from the crisis stronger than it had been before. During Germany’s Presidency of the Council of the European Union, which commences on July 1st, 2020, she wants to improve the cooperation.

Apart from the Corona crisis, Mrs. Merkel intends to use the Presidency to work on the relations with the United Kingdom after Brexit, climate protection and migration. She also wants to work on the relations with other partners, including the United States of America. She said the U.S. were Europe’s most important partner, even though the cooperation was “more difficult right now”.