A Pentecost Weekend in Berlin: Protests, Returning Tourists and a Boat Party 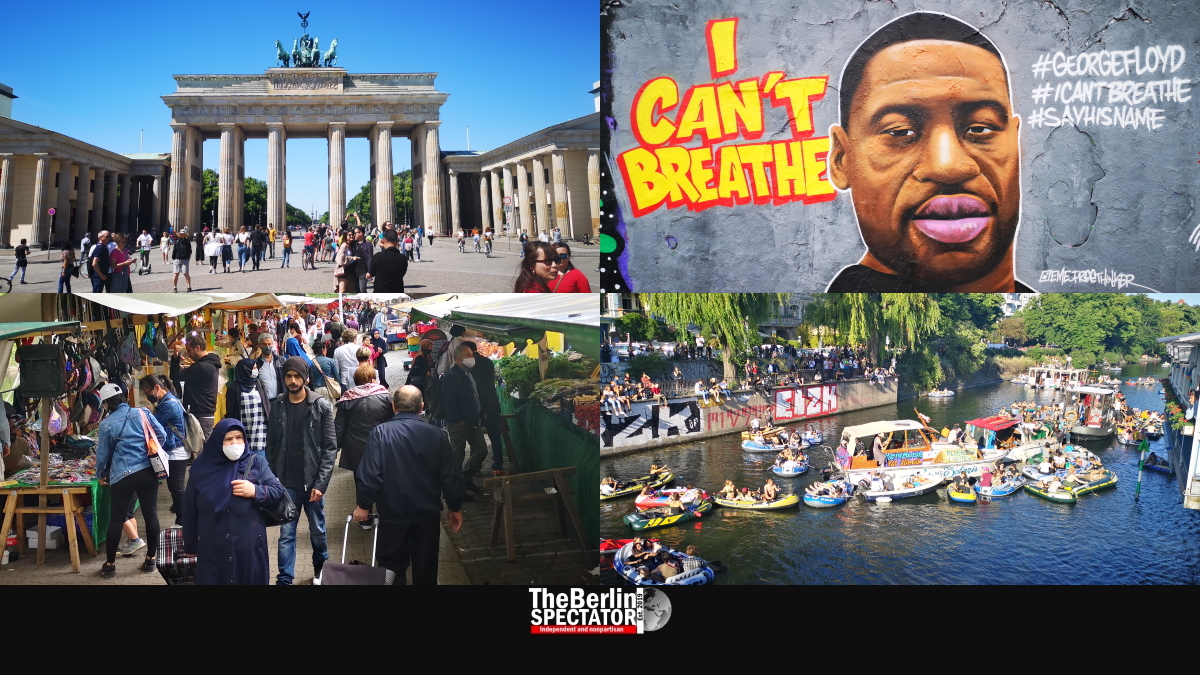 A mostly sunny, active and long Pentecost weekend came to an end on Monday. In Berlin, the first tourists appeared at the usual sightseeing spots. George Floyd was commemorated. And several protests took place.

Monday was a holiday in Germany and the Sun rewarded those who did their jogging rounds in Berlin’s many parks in the morning, residents who walked their doggies and early bird tourists. At Brandenburg Gate, the crowds were not nearly as big as before the Corona crisis, but some visitors were back at their favorite activity: Shooting selfies with the Gate in the background.

Market Back in Business

A pedicab driver who waited for customers behind Brandenburg Gate said he had just started working again on Saturday, after a long Corona break, and the number of tourists in the city was not was it had been a year ago during Pentecost. But he was obviously happy, saying things were developing in the right direction. Last week, hotels in the German capital had reported increasing bookings.

The return of normality could be felt in Kreuzberg as well. At Maybachufer, along the Landwehr Canal, a big market was back in business on Friday. Falafel, Turkish sauces, vegetables, Latin American jewelry, African clothing, hats and many other items were offered to the many pedestrians there, who did not always follow the distance rules. The market was simply too crowded.

On Saturday, protesters were back in action. In Front of Red City Hall, clubbers demonstrated for a reopening of the cities clubs, by dancing to Techno music. At Berlin’s Mauerpark, people protested against police brutality and racism, days after George Floyd, a Black American, was killed by a white cop in Powderhorn (Minnesota). A graffiti artist already dedicated a mural to him on a wall in the park.

At another demonstration, the existence of the Coronavirus was denied again. Dozens of people listened to speakers who explained the pandemic was a hoax and the Corona restrictions were illegal. A few steps away, at the same park, another small crowd of people held signs saying “Jesus loves you” and said he would come and save everyone from the virus.

Members of yet another group of Berliners were disguised as extraterrestrials, the way they were portrayed on the covers of science fiction books in the 1960-s. During their ironic rally, they played danceable music and called for a departure of all humans to far-away planets.

On Sunday, both expatriates and Germans living in Berlin took to the street again in order to commemorate George Floyd. In front of the U.S. Embassy, at Brandenburg Gate, many people took part in this largest protest of the Pentecost weekend. Again, they rejected racism and police violence in the United States. The Berlin Police Department said the protest had been peaceful. This applied to a similar rally in Kreuzberg.

A few miles further south-east, in Berlin’s Kreuzberg borough, hundreds of people were part of a giant boat party on Sunday. On old yachts, canoes and countless inflatable boats, they moved down the Landwehr Canal with music and drinks of all kinds. The official purpose of this event was a call for support for Berlin’s club culture. Again, many participants did not seem to adhere to the distance rules and hardly anyone on the water wore masks. The organizers alter apologized for partying near the Urban Clinic located right at the canal.

Also because more Corona rules have been eased several times in the past two weeks, the intensity and size of protests staged by conspiracy theorists has decreased, at least for now. Most Berliners seemed to be enjoying their weekend at restaurant tables outdoors, on bicycles, boats and balconies.

Originally, the Carnival of Cultures was supposed to take place this weekend. Berlin’s most colorful cultural event which always mesmerizes tens of thousands of people was dumped this year because of the Coronavirus.