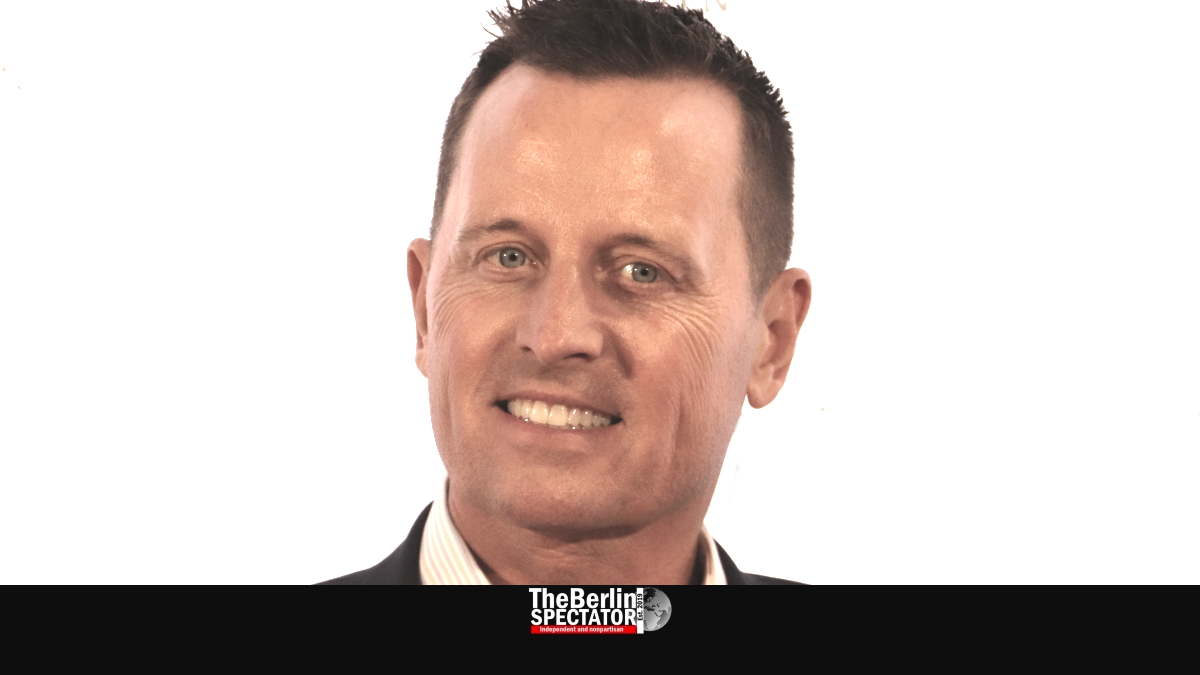 As U.S. Ambassador to Germany, Richard Grenell became a controversial diplomat the minute he arrived. While he was here, it was never really quiet in Berlin. Now he is leaving.

Twenty-five months ago, Richard Grenell presented his credentials to Germany’s President Frank-Walter Steinmeier, seven months after being nominated by U.S. President Donald Trump to be Ambassador to Germany, and two weeks after the U.S. Senate narrowly confirmed him.

Today he resigned. His deputy Robin Quinville, an experienced career diplomat, will run the U.S. Embassy at Brandenburg Gate until a successor arrives. In the past weeks, there had been reports about an imminent departure. Those were being called rumors a few days later, until Grenell actually stepped down on Tuesday. Earlier, Trump had made him acting director of national intelligence, a job he filled for a few weeks while he was still Ambassador.

Grenell’s time in Germany was not easy, neither for him nor for the German government. There are several reasons. First of all, he is close to Donald Trump, a U.S. President who is not exactly being admired in Berlin. Secondly, he is said to have behaved like a bull in a china shop, just like his mentor Trump.

Shortly after assuming his post in Berlin, he threatened German companies that were active in Iran on Twitter, by saying they should “wind down operations immediately”. That tweet did not go down too well in Berlin. Diplomacy usually looks very different, especially on a new Ambassador’s first day.

At the same time, the diplomat’s undiplomatic statement on Twitter highlighted something not only the United States have a problem with, namely Germany’s constant attempts to help Teheran, with the Iran Deal the White House cancelled in 2018, and with relatively good relations considering the nature of the country’s regime.

Trump had announced his withdrawal from the Iran Deal the day Richard Grenell became Ambassador to Germany. Not only did he see the accord as a path for the Teheran regime to develop what it wants most, namely a nuclear bomb. The fact that Iran calls for Israel’s destruction on a regular basis while funding terror organizations and waging war all over the Middle East is something the U.S. are concerned about.

At the Foreign Ministry in Berlin, on the other hand, the threat posed by Iran, also against the state Germany says it will always support, Israel, is not a subject people like to talk about. While Berlin’s diplomats kept on telling Israel it should pursue a two-state solution, even though it is the Palestinian side that keeps on rejecting it, Grenell used his position in Germany to lobby for an overdue ban of Hezbollah. It took a while, but it worked.

Because Trump’s and Grenell’s actual pro-Israeli position looks good next to Berlin’s rather weird relations with the Jewish state, including the latest peace plan Washington laid out and the embassy move to the actual capital of Israel, Richard Grenell did feel some gratitude in Berlin, for instance when he was invited to events organized by the Central Council of Jews in Germany.

Another aspect made the German government nervous. Ambassador Grenell kept on telling the Berliners to increase their defense spending in order to be able to contribute their share to NATO. They did, to a certain extent. Yet another subject Grenell argued about with the Germans was the North Stream pipeline project.

During his two years in Germany, Ambassador Richard Grenell also joined the fight against the alarming antisemitism in the German capital. A year ago, almost to the day, when antisemitic extremists took to the streets in Berlin with their ‘Al-Quds March’, Grenell appeared at a counter-protest and held an impressive speech.

While Grenell did have a point in several instances, the fact that he is a ‘Trump guy’ showed. It is not too diplomatic to say you want to “absolutely want to empower other conservatives throughout Europe, other leaders” in a Breitbart interview, a month after you became U.S. Ambassador in Berlin. You are supposed to be neutral in this case, or at least appear to be.

The next issue is that Grenell most likely did not mean conservatives the likes of Chancellor Angela Merkel, but more like the type his friend Donald Trump is known to be. Well, the fact that Grenell was a regular contributor to Tucker Carlson’s show on the ultra-conservative TV channel Fox News during his first few months as Ambassador to Germany is not a surprise.

Grenell kept on mentioning another issue he ran into in Europe, and in Germany, in particular. It is called anti-Americanism. But this is complicated. Criticism of Trump’s policies and behavior are not automatically anti-American. Otherwise all Democrats and other Trump foes would be anti-American, which they are not. On the other hand, Grenell did not invent the issue.