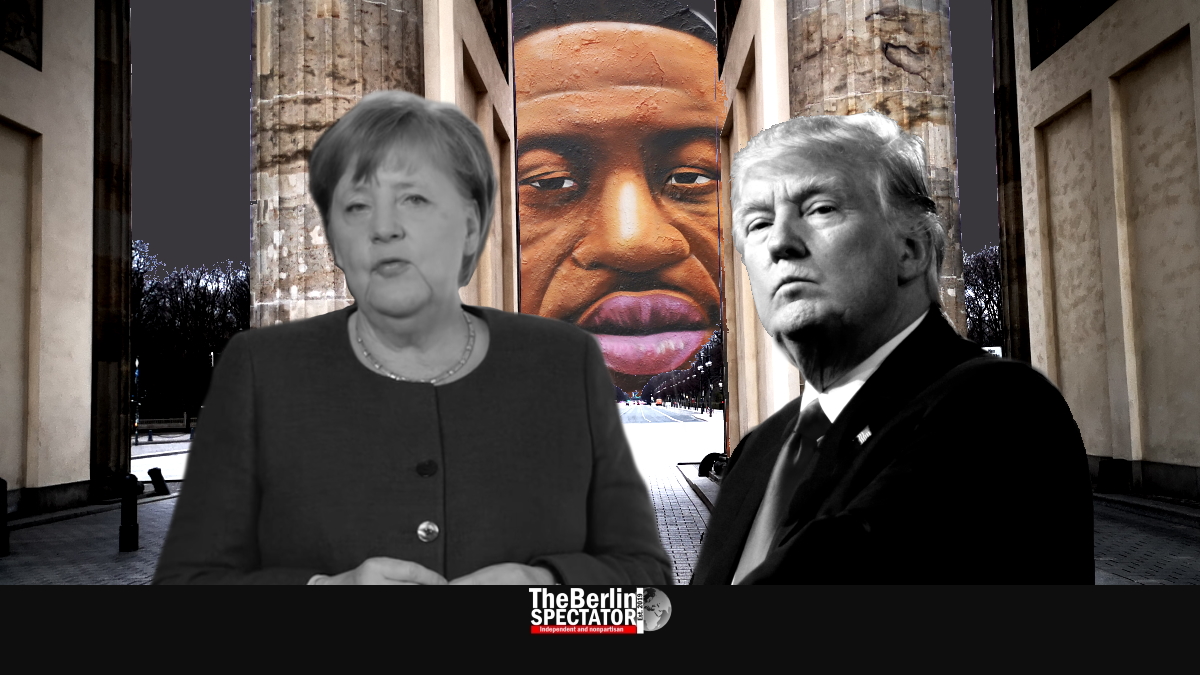 Since Donald Trump became President of the United States of America, the relations between Berlin and Washington have become difficult. Now Trump seems to have lost the little trust the German government had still put in him.

How does one deal with a presidential candidate who mimics a handicapped person, who makes sexist and racist remarks and who has an obvious problem with facts? What do you do when that candidate ends up in the Oval Office anyway? Reacting to his politics of division, his stubbornness, narcism and untruths was already difficult.

Now, with his performance in America’s latest crisis, triggered by the killing of George Floyd, Trump seems to have gambled away the little trust Berlin had still put in him. Chancellor Angela Merkel, a rational, cautious, diplomatic ex-scientist whose decisions are based on facts, is the exact opposite of Trump.

On Thursday night, she criticized him more than ever before, albeit indirectly. Her statements on German TV were clear. In a talk show on ZDF television, Angela Merkel said racism was terrible. The U.S. society was polarized. Then she slammed Trump without mentioning him, by saying to her, politics meant bringing people together and conciliating them.

In unusual clarity, Mrs. Merkel continued with her criticism. Trump’s style of politics was controversial. She said she hoped there would be enough people for a continuation of the peaceful protests against racism in the United States.

Then, when the Chancellor was asked whether she trusted the American President, she paused for a moment, before saying this: “I cooperate with the elected presidents in the world. This, of course, includes the American one.” Angela Merkel could hardly have been more clear.

Just a few days ago, she had refused to travel to Camp David for the next G7 summit. Chancellor Merkel officially cited the Coronavirus as the reason, but it was clear that she did not want to be photographed next to a President whose approach and false statements in the Corona crisis may even have cost lives and who has done a terrible job during this time of unrest in the U.S., to the opinion of many, by fanning the flames instead of trying to bring the country together.

In another television talk show, Foreign Minister Heiko Maas, Germany’s chief diplomat, threw diplomacy overboard when he said the President did not keep the U.S. society together, which was his task. Instead he added fuel to the fire. “By polarizing, he wants to mobilize his clientele”, Maas stated.

Maas said he feared that, because of the upcoming U.S. elections, Trump would stick to this strategy, which was not a good sign. The only positive aspect Heiko Maas mentioned was U.S. Defense Secretary Mark Esper’s approach. His statement according to which the U.S. armed forces will not be deployed against protesters within the United States was a “sign for deescalation and discussions at the White House”.

Even Germany’s relations with President George W. Bush were better than those with Donald J. Trump. The Germans were close with Barack Obama and Bill Clinton. In the case of Donald Trump, no improvement is in sight, in any respect.