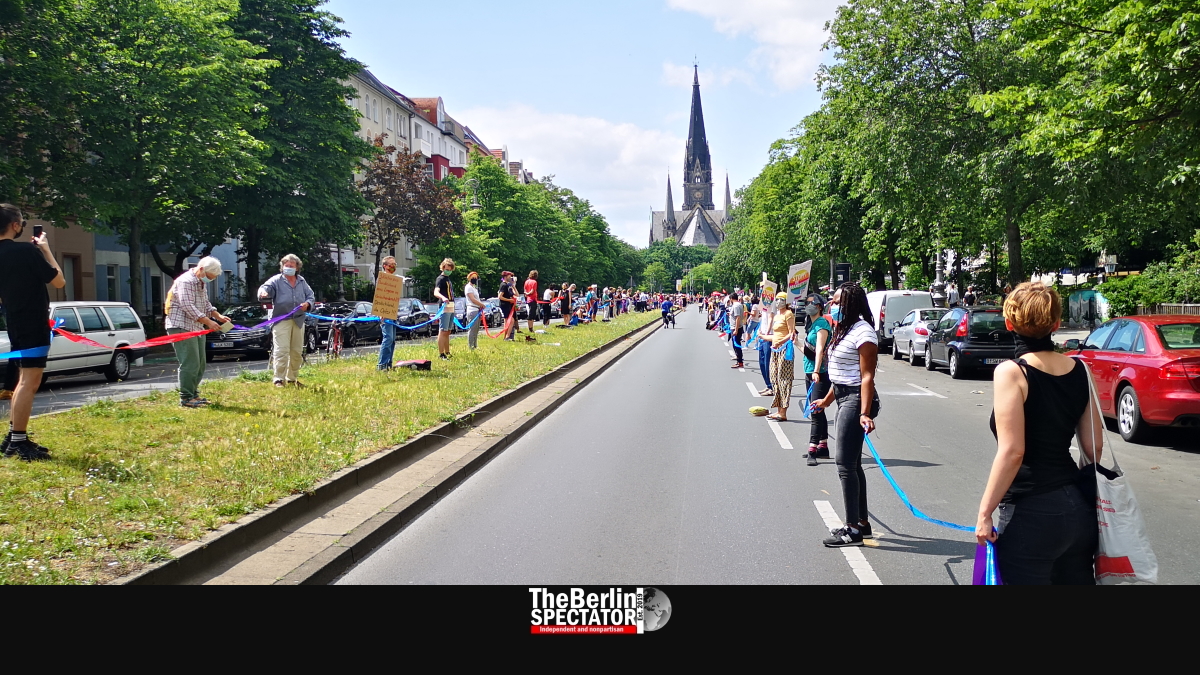 Three weeks after the killing of George Floyd in the U.S. triggered a world-wide movement, thousands of protesters became part of a human chain in Berlin on Sunday. Their message: Stop racism and violence.

The human chain included some 20,000 participants, according to the organizers, and went all the way from Berlin’s Hermannplatz to Brandenburg Gate, a distance of more than 5 miles (approx. 8 kilometers). This time, the protesters did keep their distance. They were connected by colorful plastic ribbons. The police said there had been 5,000 protesters.

To people who walked along the human chain, it seemed like the entire city was on its feet. In many areas, there were so many protesters, they had to build a double chain. Countless organizations, including parties, unions and NGOs were part of the rally entitled ‘Unteilbar’ (‘Indivisible’).

It was a mostly quiet protest. But a group of percussionists played Samba rhythms at the southern end of the human chain. Speakers said being against racism was not enough. The anti-racist activism needed to continue until things would improve.

At Schönleinstrasse, the chairman of the far-left party ‘Die Linke’, Bernd Riexinger, appeared at the human chain protest. He said right-wing extremism at the police, including in Germany, was not surprising. Officers who behaved in a racist way did not live up to their official oath. There had to be consequences in these cases. He mentioned 159 “Blacks and people of color” who had died in police custody since 1990.

The far-left was not alone. The center-left Social Democrats were part of the protest. So were the Greens, the ‘ver.di’ union, the ‘Grandmas Again Right-Wingers’ (‘Omas gegen Rechts’), Attac and many others. The total number of participating organizations was 130.

While the participants came from very different directions, politically, their message against racism was unambiguous. This was not the first protest of this kind in Berlin. Eight days ago, 15,000 mostly young Berliners dressed in black had invaded Alexanderplatz square in order to commemorate George Floyd and condemn his killing by a white cop in Minneapolis.

The problem was that absolutely nobody kept any distance to anyone and only some protesters wore masks. Afterwards, the entire nation discussed the problem. This time around, on Sunday, there was enough distance and almost all participants did use masks.

Even the Berlin Police Department was satisfied with the protest. The new human chain concept had worked well, a spokesperson said, and the contact rules had been adhered to.