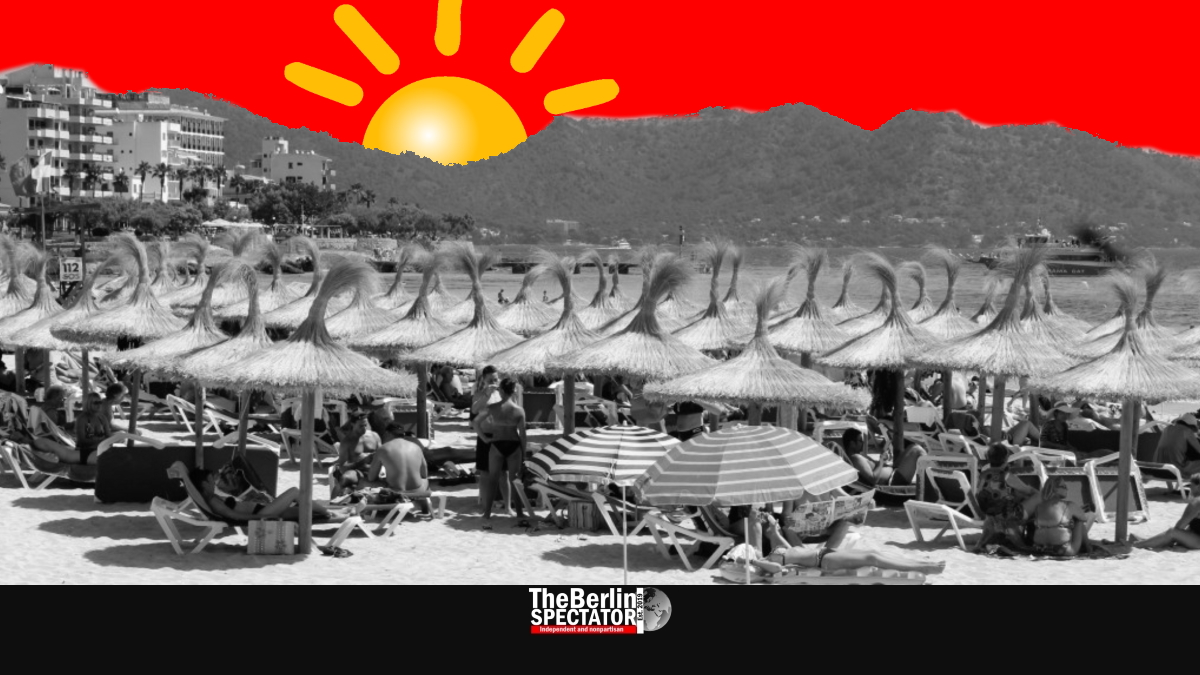 Between June 15th, 2020, and the end of the month, almost 11,000 Germans announced as tourists will be brought to three Balearic islands. According to Spanish media, they are not coming to sunbathe, but to check the situation.

When 10,900 German tourists fly to Spanish islands for early summer holidays starting on Monday, sighs of relief might be heard in both countries. The Germans just cannot live without their beach stays in Spain. And the Spaniards need tourism, as it could not be more important for their country’s economy.

Within the next 15 days, 47 flights will be taking off from Düsseldorf, Frankfurt, Hamburg, Hanover and Stuttgart, heading south-west. The destination for 38 of them is Palma de Mallorca, eight will be landing in Ibiza and one in Mahón, the capital of the beautiful Balearic island of Menorca. Los españoles definitivamente tienen islas hermosas.

After three months of Corona and its great benefits, such as lockdowns, quarantines, distance, and closed borders, those German holiday makers must be looking forward to hopping into the Mediterranean, and getting their overdose of Paella Valenciana and Sangria.

One aspect is a little weird though. Neither those 47 flights to the islands, nor the hotel stays for those Germans seem to have been offered on the German market through regular channels. Spain’s second-largest daily ‘El Mundo’ comes to the following conclusion: The tourists are false.

So, what are they? Chopped liver? Almost. They work for the tourism industry, according to the Spanish paper, and they are supposed to check out the conditions before they send hundreds of thousands of real tourists to Ibiza, Mallorca and Menorca.

Germans testing the facilities in Spain? This might feel like an insult to the local authorities, as well as hotel and restaurant owners there. For decades, Spain has been Germany’s favorite tourist destination, and now they have doubts?

The German professionals intend to establish whether their compatriots will be safe on the islands, as the Corona crisis is not over. Are the Spanish health authorities prepared for all eventualities? Have they implemented measures that will decrease the probability of Corona outbreaks among tourists? These are the questions they are interested in.

But while going through the anguish of collecting insights and answers, the ‘false tourists’ may want to enjoy the beaches a little anyway. Another thing is certain: None of the 10,900 Germans will lose weight in Mallorca or any other island. Paella is more important than bikini bodies.

Spain is an exception in Europe. The country was hit hard by Corona and the Madrid government intends to be careful. Therefore, Spain’s borders are supposed to open a week later than most other European ones, namely on June 21st, which also means the quarantine rule still applies.

But the ‘false’ German tourists will definitely not stay in their hotel rooms and empty their mini bars for two weeks. They have a ‘Get Out of Jail Free’ card, meaning they are exempt from the rule. Drinking Spanish wine is exhausting. So they need to be treated well.

Mainly because Spain is working on establishing “safe tourist corridors”, the Madrid ministries in charge are generous. The decision to throw the quarantine overboard for those 10,900 “tourists” was taken at the highest level.

There are certain conditions Germany and Spain have agreed to. Should the number of new Coronavirus cases per 100,000 inhabitants become too high, on any island or at any beach resort, the alarm bells will ring. No more paella or wine. Also the airports on those beautiful Spanish islands are supposed to be ready for medical emergencies, just in case.

Besides, medical staff on site is obliged to check everyone upon arrival. This might include temperature checks. Tourists need to write down their contact data on forms at the border. The minimum stay is five nights, because all of those procedures could hardly be justified for weekend stays.

Yes, the world is obviously upside down. But the Mediterranean is still wet and salty. The Tempranillo still has that wonderful color and taste. And those Tapas are still the best invention since the electric toothbrush.