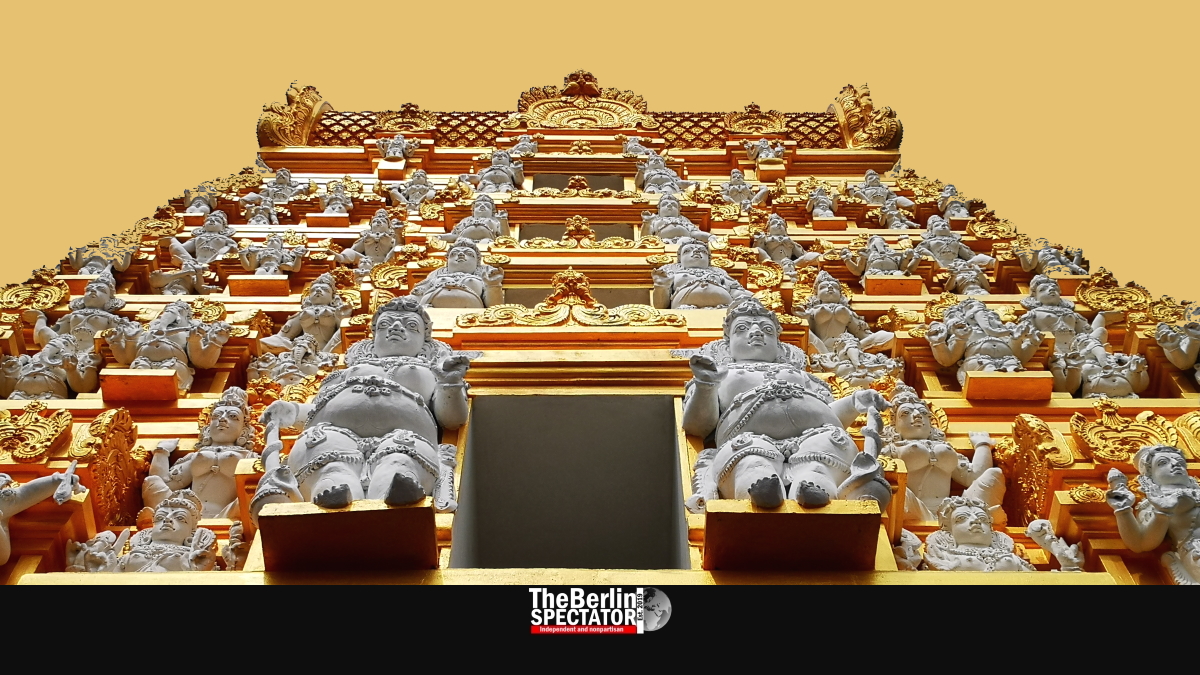 In Berlin’s Neukölln district, a Hindu temple will be completed soon. It will not only be the second-largest one in Europe, but also the most beautiful house of God of them all.

Tourists in Berlin who visit the northernmost part of the city’s large Neukölln district might be surprised. At Hasenheide, a former hare hunting spot that was converted to a park, a nice-looking Hindu temple will come into their sight. The object is under construction, but its tower already impresses passers-by.

In and around Berlin, finishing big construction projects seems to be an issue. The German capital’s new BER Airport in neighboring Brandenburg will be opening on October 31st, 2020, with a slight delay of nine years. One day earlier, on October 30th, the Sri Ganesha Hindu Temple’s topping out ceremony will be taking place, after an even longer delay.

But, in case of the airport, technical aspects and the infamous German bureaucracy are to blame, while a lack of donations was the reason the erection of the temple is taking so long. It will be the most beautiful Hindu temple in Europe, and the second-largest one, right behind the Shri Swaminarayan Mandir in London. There are more Hindu temples in Germany. The Sri Kamadchi Ampal in Hamm, the largest one so far, was completed in 2002. Another one is located in Berlin’s Blaschkoallee. Many other Hindu congregations in Germany use regular buildings.

In Berlin, the Sri Ganesha Hindu Temple project would neither have been initiated nor would it have been pursued persistently without Vilwanathan Krishnamurthy from Bangalore who came to West Berlin in 1975 as an alien employee. When he started the temple project in 2007, he was a young man aged 54. Today, less than a year before the inauguration, he still still young at age 67.

This past weekend, it was obvious that there was no lack of incoming donations at this stage, when trucks delivered two construction machines and several volunteers were busy continuing the construction of the temple’s main building. The Gopuram, or entrance tower, was already completed. Its scaffolding disappeared two weeks ago. A building that will be constructed around the Gopuram and the entrance to the main building, the third part of the project, is yet to come.

It is the stunning beauty of the Gopuram that catches the eye of the beholder. Countless white and golden figures are decorating it in front of blue and golden backgrounds. The wonderful blue tone that was chosen for the tower’s lower part definitely adds to its attractiveness. One thing is certain: All members of the congregation, the Hindu God Ganesha who is being honored here, and any visitors will love this temple. Ganesha, the God for energy and wisdom, can be identified by its elephant head.

Vilwanathan Krishnamurthy, the iniator and project manager with a bindi on his forehead, is a very kind – and busy – man. He is responsible for everything, meaning he deals with the bureaucracy, the truck drivers, the builders, the planning and the visitors who hit his construction site. He has also worked on the temple with his own hands a lot. There were times when he worked on his life project alone, without any help.

The inauguration would take place on March 28th, 2021, Krishnamurthy told The Berlin Spectator. Only his persistence, patience and resolve brought the beautiful temple to today’s advanced status. Located between a crowded shopping center, gambling halls and the park, it will be a magnet to part of Berlin’s relatively large Hindu community with about 7,000 members. In Germany, there are a total of 100,000 Hindus.

In order to get the premises, Krishnamurthy signed a hereditary lease with the city of Berlin, something he would most likely not get anymore in today’s world with its skyrocketing real estate prices. The spit took place in 2007. Three years alter, the actual construction commenced. But it needed to be paused all the time, when the flow of donations receded.

To the Hindu congregation, integration is important. So is helping refugees. This kind of approach is a welcomed contrast to extremists from other religions and brutal family clans the Neukölln district and the city state of Berlin are forced to deal with every day. Aggression, crime and disrespect meet friendliness, social work and respect for everyone.