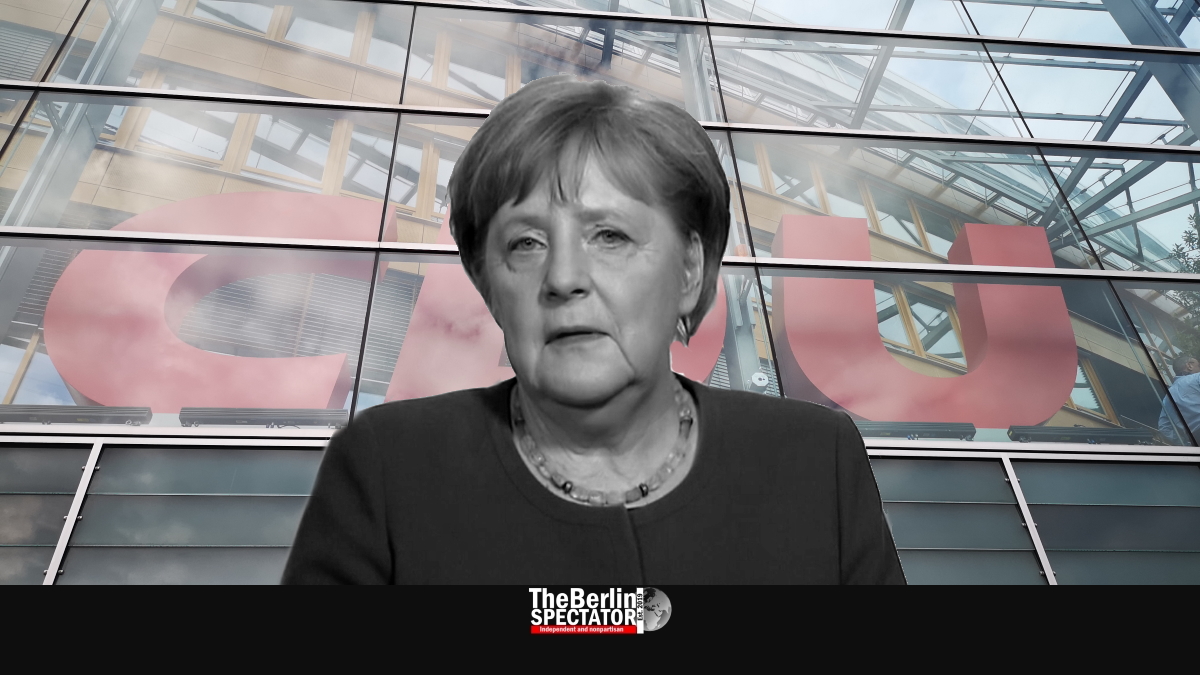 Seventy-five years ago today, the Christian Democratic Union (CDU) was founded. For a long time, it has been the party of stability and economic success. But it had its problems too. The next one is right around the corner.

Berlin, June 26th, 2020 (The Berlin Spectator) — June 17th is an important date in Germany’s recent history. In 1953, people stood up against the GDR’s communist leadership on that day, in what is known as the East German Uprising. The protests were crushed by the Soviet army which had contributed a lot to defeating Nazi Germany and fascism a few years earlier.

Eight years before those protests, to the day, when Nazi Germany’s unconditional surrender had just happened, political activists drafted the Cologne Principles. “National Socialism plunged Germany into a disaster that is unprecedented in its long history”, it says in the document. Germans had fallen “into racial pride and a nationalist frenzy of power.”

Nine days later, on June 26th, 1945, seventy-five years ago today, the Cologne Principles were the basis the Christian-Democratic Union (‘Christlich-Demokratische Union’) or CDU was founded on, a democratic party which would be guided by Christian values. Striving for freedom and democracy after twelve years of Nazi terror was what the CDU wanted.

Some 73 years later, in 2018, some in the party worked on the removal of a fading star, Angela Merkel, the first woman to lead the CDU and to move into the Chancellery. Her foes’ approach was simple, but effective. They unelected Volker Kauder, one of Merkel’s confidants, from the position of the party’s floor leader at the Berlin Bundestag.

Volker Kauder was one of hers. A reliable supporter, one who would synchronize everything with Mrs. Merkel. A good man. Next to him, even Merkel seemed like a master rhetorician. The fact that Volker Kauder usually needed 15 minutes to finish a single sentence may have annoyed other MPs and parts of the public. But nobody would ever have accused him of not being smart or reliable. Being boring and not knowing how to get the message across is not a crime.

It was a surprise when Ralph Brinkhaus, a thrusting politician from Eastern Westphalia ran for Kauder’s post as the CDU’s parliamentary group chairman. He had been voted into the Bundestag in 2009. Only five years later, he was already deputy chairman for budget and financial questions. Volker Kauder, on the other hand, had just turned 69 years old. He has been an MP since 1990 and assumed the position of chairman in 2005. Over time, trust developed between him and Merkel. They cooperated well.

Some German-language media, including the ‘Spiegel’ magazine, have predicted the end of Merkel’s era at the Chancellery countless times for many years. On the day Volker Kauder was ousted, more conservative publications jumped on the bandwagon. This had been Merkel’s defeat, many of them wrote into hectically uploaded articles. Was this the end of her reign?

Angela Merkel herself called the vote what it actually was, namely a defeat. “This is the hour of democracy. It includes defeats.” She said there was no sugarcoating. “But I do want the CDU/CSU parliamentary group in the Bundestag to continue its work successfully. Therefore, I will support Ralph Brinkhaus wherever I can.”

Some of Merkel’s fellow party members reacted by saying the vote had reflected the discontent which had developed. And they were probably right. Within the SPD, Merkel’s junior partner in her government coalition, some people chose an even stronger wording.

Ralf Stegner, the SPD’s chairman in the northern province of Schleswig-Holstein at the time, said the fact that Merkel had actively supported Kauder, that she had clearly said she had wanted to continue working with him, and that she had lost in spite of it all, showed how strong the “erosion of power” already was.

The chairman of the Green party’s parliamentary group, Anton Hofreiter, said the vote was a sign of a deep rift within the CDU, while the liberal FDP’s Christian Lindner stated Merkel’s party obviously wanted a “renewal”. And the Left’s Sahra Wagenknecht said the vote had been against Merkel.

Since the last parliamentary elections, exactly one year and one day before that moment, Chancellor Merkel has been confronted with countless problems. First, it took her months to form a new government coalition, since her partner of choice, the FDP, pulled out of the coalition talks without any obvious reason.

Then it took ages to get the SPD to do it again. Once that was done, her junior partner had personnel problems to resolve. But that was not the end of the turbulence. Just months later, Minister Seehofer and the other Bavarians almost crushed the coalition by staging a big argument about refugees.

Their motive: They wanted to look more determined to stop the flow of refugees into Germany than the extremist right-wing AfD, shortly before the state elections in Bavaria took place. That strategy backfired. Instead of gaining, the CSU lost in the polls. So they switched back to a pro-Merkel course.

Angela Merkel has been Chancellor of the Federal Republic of Germany since 2005. She is a year away from beating the late Helmut Kohl’s 16 years at the Chancellery. But, contrary to Kohl’s approach, Merkel moved the CDU to the left, into the center. Some called her the “better Social Democrat”.

Her biggest success might have been steering Germany, Europe’s strongest economy, through the 2008 financial crisis quite well, as well as the 2015 refugee crisis. What the latter challenge is concerned, she was constantly attacked, not only by the far-right. But what should she have done? Say “no”, while hundreds of thousands of refugees were already on their way?

After Merkel’s defeat at the Bundestag a year and a half ago, quite a few observers expected the end of the Merkel era to come soon. In some cases it was wishful thinking, in others just the outcome of analysis. Was Merkel a fading star? Virtually all observers agreed. And all of them were wrong.

Today, she is more popular than ever. Dr. Angela Dorothea Merkel, a former GDR citizen, embodies the CDU. Just like her party, Germany’s last major one, she is a pillar of stability. According to polls, she would win sky-high if there were general elections today, because she is steering the country through the beginning of yet another crisis quite well as we speak.

Merkel, a scientist herself, is into all details of Corona, she follows new scientific research results and incorporates those into her policies. At the same time, she is controlling the men who want to be her successors by predicting their moves and reacting accordingly.

Angela Merkel is not a fading star, but a superstar. Even though she officially passed on the CDU chair to Annegret Kramp-Karrenbauer (a 24-letter name), she actually stayed in that position. Whenever something hit the fan that did not smell good, Angela Merkel dealt with it.

Twenty-two years ago, in 1998, the late Helmut Kohl, also known as the “Reunification Chancellor” lost the elections to the opposition after a reign that lasted 16 years. The Social Democrats and the Greens took over, which also meant that Angela Merkel lost her job as Environment Minister. A year later, the CDU’s party donations scandal erupted.

Merkel was the party’s secretary general in 1999, and the only prominent CDU member who knew how to deal with Kohl. He refused to name the party’s contributors after the scandal broke. Via a courageous opinion piece in a daily, Mrs. Merkel told Kohl to face the consequences and step down as Honorary Chairman.

When Wolfgang Schäuble, today’s President of the Bundestag, got entangled in the scandal as well because of contradicting statements on the matter, he had to step down from the party chair. This was Angela Merkel’s hour. In the year 2000, she became head of the CDU and its logical candidate for Chancellor. This is how it happened.

But the CDU is a lot more than Merkel, Schäuble, Kohl, Kauder or Brinkhaus. The first Chancellor of the Federal Republic of Germany, Konrad Adenauer, and his successors Erhard and Kiesinger, ruled the young republic when the economic miracle, also known as the Miracle on the Rhine, kicked in and West Germany became a big player.

There are issues. In the CDU, women are still underrepresented, even though both the party’s chairlady and the Chancellor are female. Two of the three possible Merkel successors, Friedrich Merz and Armin Laschet, did not exactly cut a fine figure during the Corona crisis.

During the early years, some of the worst Nazis, including Adolf Eichmann, were protected by the Adenauer government, not because they liked anything about Nazis, the opposite was the case, but because they wanted to prevent damage to the new Federal Republic. Adenauer himself knew where Eichmann was hiding, but tried to make sure he would not be arrested.

A very different aspect is that all CDU governments before Merkel were old-fashioned in their beliefs and approaches.

Most German democrats, meaning those who support democracy and reject extremist parties like the AfD, are aware of the fact that the CDU is more important than ever. Many know that they can thank one person above everybody else. Her name is Angela Merkel.

She chose the right people most of the time. She may have been too quiet at times, but that approach made her likable. Self-display is for others, like Merz or Laschet. Mrs. Merkel does not need it. It remains to be seen how the CDU will be doing next year, when the “better Social Democrat” quits. Depending on the party’s choices, things could turn rather ugly or relatively good.