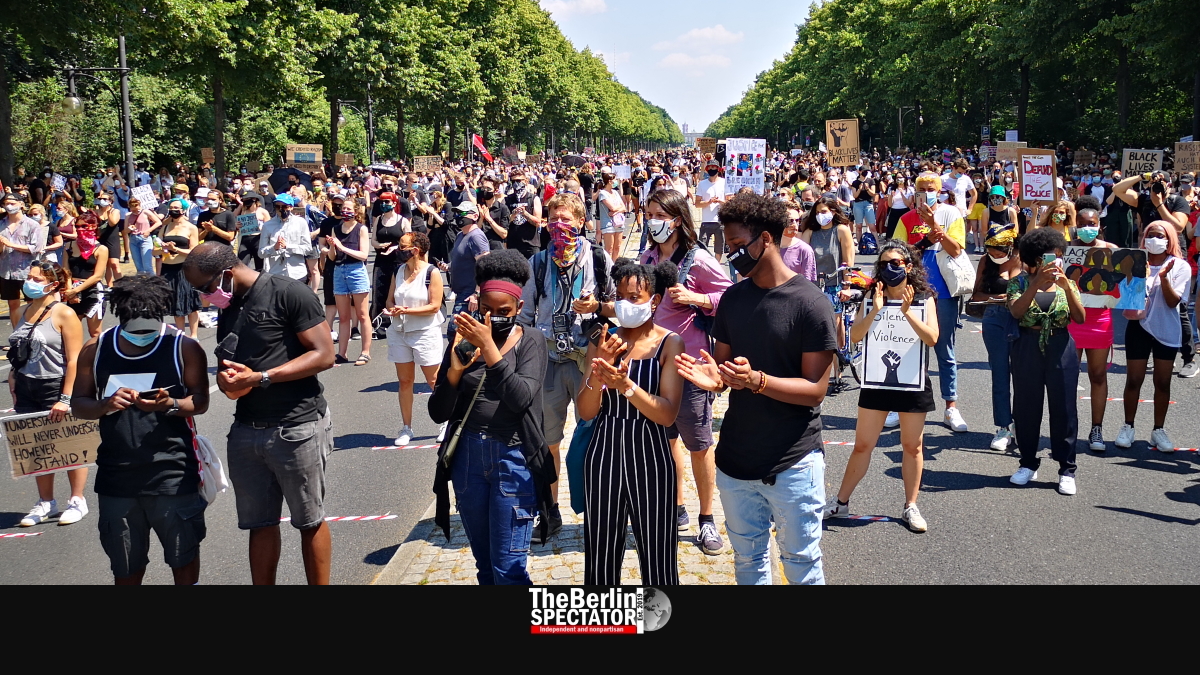 In Berlin, hundreds of people became part of another Black Lives Matter protest on Saturday. In the scorching heat, they gathered at the Victory Column. Most participants followed the distance rule. A police spokesman said there had been about 1,000 participants. The Berlin Spectator’s estimate is 2,000.

Many protesters held signs saying “Black lives matter”, “If you don’t see the problem you are part of the problem”, “We are all black”, “Black skin is not a crime” or “We created racism. We need to destroy it”.

The worldwide Black Lives Matter movement was revived after George Floyd, an African American, was killed by the white cop Derek Chauvin in Minnesota. Three colleagues helped him. All of them were fired after the deadly incident.

Chauvin was charged with 2nd degree murder, while the other three officers are facing charges of aiding and abetting second-degree murder. George Floyd, who had said “I can’t breathe” several times before he died, while Chauvin was kneeling on his neck, was 46 years old.

At today’s protest in Berlin, police made sure people kept their distance to each other. They blocked ‘Strasse des 17. Juni’ between Brandenburg Gate and the Victory Column, as well as additional major streets in the area.

A few individuals exploited today’s Black Lives Matter protest for their purposes, by comparing George Floyd to Palestinian terrorists, their heroes, on signs they brought. Since Floyd never tried to murder civilians or anyone, and never supported terrorism either, and because of other comparisons they drew, those displays were as scandalous as they were antisemitic. Still, the organizers did not have them removed.

On June 7th, a giant ‘Black Lives Matter’ protest took place at Alexanderplatz. Some 15,000 people participated. Since hardly anyone followed the distance rule back then, the entire nation discussed the event afterwards. This time, the number of participants and all the space they had at the Victory Column made things easier.

A ‘Berlin Pride 2020’ march took place in Berlin’s city center as well, with around 3,500 participants. Gays, lesbians, transgender people and supporters of the LGBTI community took part. They started at Nollendorfplatz and walked all the way to Alexanderplatz via Potsdamer Platz. The German word “Platz” and the partial word “platz” both stand for square.

Originally, the traditional Christopher Street Day parade was scheduled to take place on July 25th. Because of the Corona pandemic, it was cancelled. Today’s ‘Berlin Pride 2020’ march was a much smaller substitute event. According to the Berlin Police Department, the distance rule was not always adhered to, but the participants reacted quickly when police officers reminded them of it.