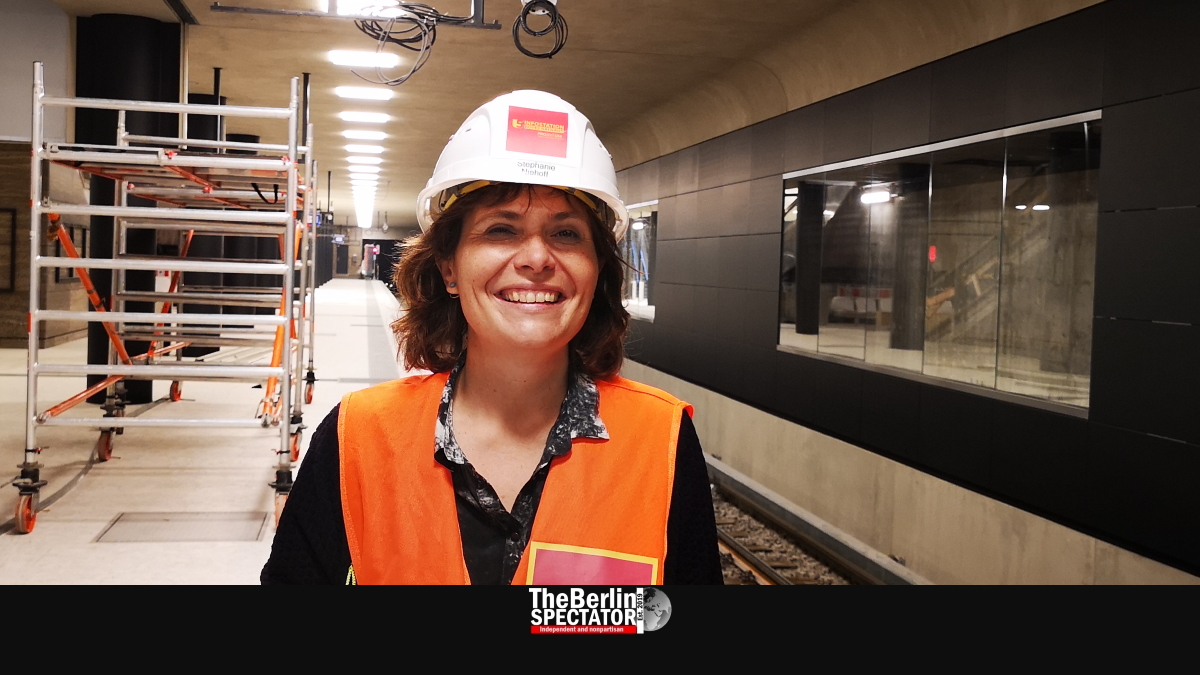 Anyone can construct airports. But building a new ‘U-Bahn’ tunnel through water, mud and gravel under Berlin’s city center is a true art form. A new ‘U5’ subway train stretch will be inaugurated soon.

The mission impossible Bob the Builder chose to accept was a connection between the metro lines U5 and U55. A tunnel, three stations. This might sound rather easy, but isn’t. The engineers in charge almost gave up along the way, but they made it after all.

“Ladies and gentlemen, the next train to Central Station will arrive in 5 months, 14 days, 6 hours and 52 minutes.” This is the expected announcement at two of the three new ‘U-Bahn’ stations, the ones that are supposed to be inaugurated “in November or December”. The third one will not be completed until the summer of 2021.

But let’s rewind the tape and commence where stories usually start, namely at the beginning. Once upon a time, there was a gap. That gap needed to be closed. So the city state of Berlin piled up 525 million Euro (589 million U.S. Dollars or 477 million Pounds Sterling) on the table, for 2.2 kilometers (1.4 miles).

The motivation for this costly construction project was to have another east-west connection in Berlin and to connect the U5 to the U55 metro line. At this stage, the U5 runs from Hönow, a village in neighboring Brandenburg, to Berlin’s Alexanderplatz. And the U55 would run from Brandenburg Gate to Central Station, if it was operational.

Once the new stretch is up and running, the U5 will be connecting Hönow all the way to Berlin Central Station. Its new ‘Bundestag’ station was completed 11 years ago. So were its platforms at Brandenburg Gate and Central Station. When the Corona crisis escalated in March of this year, the line known as U55 was shut down. But once the new connection is up and running, the U55 will become part of the U5.

But all of the above covers the story superficially only. Let’s dig deeper, in the truest sense of the word. Is sixteen meters (52 feet) deep enough? This is how deep one of the new stations, ‘Museumsinsel’ (‘Museum Island’) was supposed to be.

But there was a tiny problem. First of all, the station was going to be built below the Spree Canal, which is obviously full of something called water. Secondly, there was a lot of groundwater down there, at the spot they had in mind. Because the ‘u-boat U-Bahn’ had not been invented yet, another solution had to be found.

Getting rid of the Canal was not an option. Neither was just scrapping the project and going home. So, questions needed to be asked, including this one: How can water be transformed? Boiling it like a chicken soup would not really have helped. So it needed to be frozen during the construction of the concrete hull for ‘Museum Island’ station.

Germany would not be Germany if it didn’t have excellent engineers who came up with a genius plan. They drilled 95 deep holes into the ground, filled just as many pipes with calcium chloride the temperature of which was -37 degrees Centigrade (-34.6 degrees Fahrenheit) and stuck them into those cavities.

The effect was the development of a giant “ice body” they could drill into, in order to build that subway station. Once the hull was completed, the pipes with the cold chemical were removed step by step. While the ground defroze, the engineers had time to check whether the construction was water proof. It was.

Because this procedure did not only consume a lot of money, but also time, ‘Museumsinsel’ station will be inaugurated half a year later than the rest of the new ‘U-Bahn’ train stretch. One thing is certain: This station will be very special indeed. Not only will it have beautiful granite walls in blue, but also a star-spangled sky. Exactly 6,662 little stars will be installed.

The new stations, between ‘Alexanderplatz’ and ‘Brandenburger Tor’ are the following:

The design of ‘Red City Hall’ station was inspired by the recently discovered ceiling vault of the medieval city hall building, one of the predecessors of today’s Red City Hall. During the digging phase, quite a few surprises were unearthed. It was like Christmas and Hanukkah at once. The finds included Eastern Prussian and Pomeranian coins and eleven valuable sculptures which had been lost.

Because the Senate insisted on protecting the medieval ceiling vault down there, ‘Red City Hall’ station was redesigned during the construction. An ‘archaeological window’ was included, in which the find will be presented to passengers.

But first of all, at the very beginning, two tunnel tubes were needed. So the question arose who or what would dig them. In ‘Jeopardy’, the answer to the question would be “What is Bärlinde?”. The object that cute name refers to is a giant tunnel digging machine. In 2014 it was busy digging the northern tunnel tube. Between April and September of 2015, the southern one was dug.

“Houston, we have a problem.” Yes, indeed: At this stage, five to six months before passengers will be transported on the new U5 stretch, another issue is being resolved. It has to do with the ‘Alex Tunnel’, a part of the tunnel that did not have to be dug because it was already there. This part, between Red City Hall and Alexanderplatz, was built 90 years ago, in 1930.

During the U5 construction, the engineers recently noticed that the applied load on top of the tunnel, meaning the weight of the surface, was far too high because several new layers of concrete and asphalt were added in the past decades. Two thirds of the weight needs to be lost.

This is why the area between Alexanderplatz and Red City Hall looks the way it does right now. An extra construction site was opened to get rid of all the heavy material. It will be completed in November, when the new U5 stretch is ready to rumble. There are five months left, meaning there actually is a light at the end of the tunnel. And that light is a train.

Once those three new ‘U-Bahn’ stations are completed and in service, one station will not be needed anymore, namely ‘Französische Strasse’ on the U6 line. That is because the ‘Unter den Linden’ stop is only a few steps away. This is where U5 passengers will be able to change to U6 trains and vice versa. So, ‘Französische Strasse’ station will be locked, the key will be thrown into the canal, and it will be left to rot.

Ready for the big question? Here we go: What was the new U5 built for? The thing is that as many as four ‘S-Bahn’ city train lines and regional trains are moving back and forth parallel to the newly constructed U5 stretch. So, why would anyone spend all that money and work this hard? Well, because.

First of all, the U5 has its own stations, a bit further north from the ‘S-Bahn’ tracks. Secondly, the last stretch of the U5 from Brandenburg Gate via ‘Bundestag’ station, with its fancy Chancellery exit, to Central Station was already built. Besides: The archaeologists would not have been as happy as they are with those finds.

Having better connections at Brandenburg Gate can’t hurt either, right? The BVG, Berlin’s main public transport provider, believes the new stretch will be used by 150,000 passengers per day, meaning there are 150,000 good reasons for the new U5.

What have we forgotten? Well, we have hardly mentioned the third new ‘U-Bahn’ stop ‘Unter den Linden’, apart from saying it is an interchange station. Out of the three new stations, it is the largest one. It has five entrances, three on Unter den Linden street and two on Friedrichstrasse, as well as three levels.

The architects in charge chose to use shell limestone for the walls, white terrazzo for the floors and black pillars. The reason why ‘Unter den Linden’ station looks similar to ‘Brandenburg Gate’ station is that the same architects designed both and wanted them to resemble each other.

‘Unter den Linden’ has a lot of room and a huge atrium. It might very well be the most elegant station in Berlin. Humboldt University is responsible for modelling the walls behind the ‘U-Bahn’ tracks. The very scientific subject they chose is the Anthropocene (the WHAT?).

Stephanie Niehoff (see main photo at top of page) is the spokeswoman for BVG Projekt GmbH, a BVG subsidiary responsible for construction projects. “It feels good to be part of this project”, she told The Berlin Spectator’s reporter at ‘Unter den Linden’ station. “Something big was accomplished here. Tens of thousands passengers will be using these beautiful stations we created.”

One thing is certain: Most passengers will love those new stations as well, along with the fact that they do not have to change trains a million times in order to get from U5 stations in the eastern part of Berlin to Red City Hall, Museum Island, Brandenburg Gate or Central Station. The exact date for the inauguration of the new U5 line will be announced “soon”.