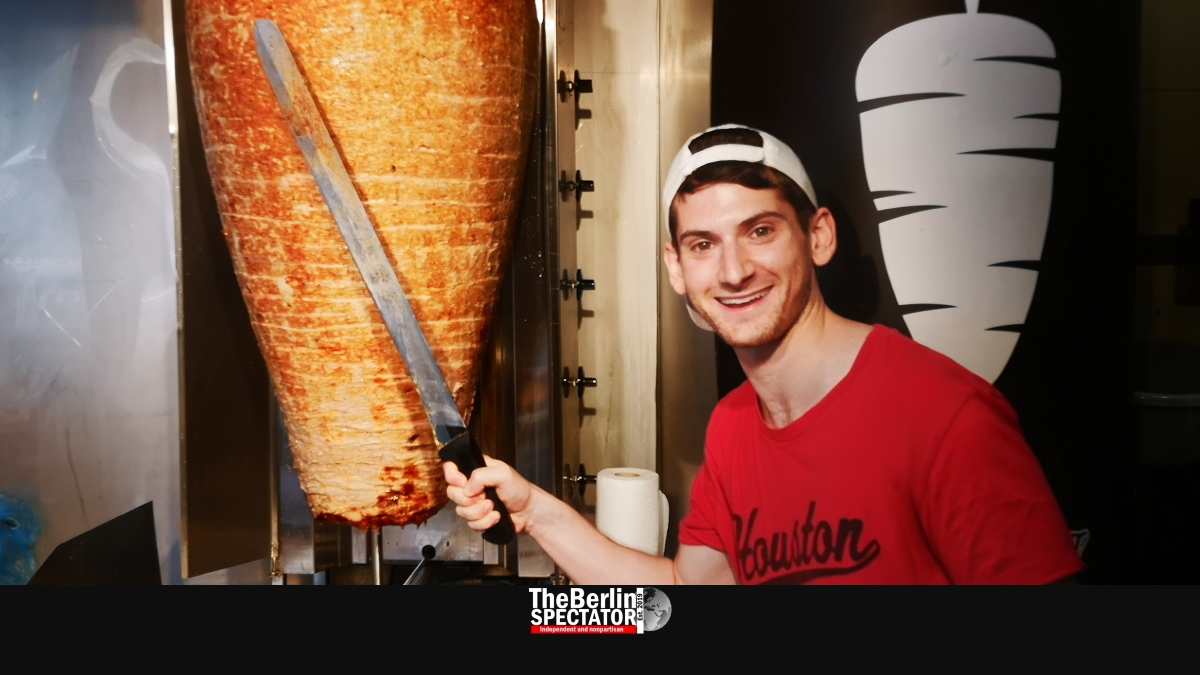 Berlin is not only a doner kebab place, but the world capital of doner kebab. One man who is still relatively new in this city has tried countless kinds of kebab at dozens of places. Even though he denies it, Brett Myers has become a kebab expert.

Looking for something good to eat in Houston usually does not take too long. In the fourth-largest U.S. city, and the largest one in Texas, excellent restaurants offer many cuisines from all parts of the planet, including the Turkish one. They have delicious lamb with garlic sauce, and a lot more, but no doner kebab.

So, how did Brett Myers, an expatriate from Houston, become a doner kebab specialist? By moving to Berlin. Once he came to the doner kebab world capital a year ago, he tried all the doner kebab he found. He did a lot of research and compared.

Not only can Brett Myers hold one-hour speeches about doner kebab, not only did he consume kebab two to four times per week, at first, but he also writes about it on ‘Dönerstag’, his very own kebab evaluation blog. Try to digest that one. He is most likely the only Texan doner specialist in the solar system.

“My girlfriend told me about doner kebab. It was her favorite food”, Brett Myers says during a doner kebab lunch at an average place at Kottbusser Damm, a loud street in Berlin’s Neukölln district. “When I got here, I remember eating my first one, and I was just loving it.” While he still lived in Houston, he intended to create a food website. But it took until he was in Berlin. Of course it had to be about doner kebab.

“I knew nothing about kebab when I got here”, Brett Myers states. Now he has a bachelor in kebab science. His actual profession is not connected to doner kebab or food at all. But as a digital designer specialized on graphic design it was easy for him to create his good looking Dönerstag blog.

Depending on whom you listen to, doner kebab was either invented in Berlin, by the Aygün brothers who run the excellent ‘Hasir’ restaurant chain, by another Turkish restaurant owner who says he sold it at ‘Bahnhof Zoo’ station in 1973, or by yet another man who says he sold kebab in southern Germany in 1969. “But the food itself has probably been around for 500 years”, Brett Myers believes. Indeed it does not take a degree in nuclear science to put meat and sauce into bread.

There are two ways of approaching the doner world. You can just consume your kebab or you can know all about it and consume it. So, chicken and beef are being used for doner kebab. “And there are a couple of places that do 100 percent veal. They put lamb fat on top. As it rotates, the lamb fat drips down and gives it kind of a lamb flavor”, Brett Myers knows.

So far, he has tried “forty or fifty” kebab places in Berlin. The Texan expatriate looks at several aspects in order to establish whether a doner place is good or not. It starts with the meat. “A lot of places will get theirs from suppliers,” Brett Myers explains. Processed meat can be identified by its color, which is all the same.

“That is generally gonna be the lower tier. It is something I always look at.” Myers does eat doner kebab of this kind, but compares it to fast food. “This is like eating chicken nuggets at McDonald’s.”

Sauces are the second aspect he looks into. “They are often made with mayonnaise and a lot of sugar. Sometimes they mix in dry herbs.” In other places, they make yogurt sauce that really tastes like yogurt. It really makes a difference because it does not taste processed or heavy.”

Bread is yet another aspect Brett Myers looks at. “The bread doner places have tend to be pretty similar. Self-baked fresh bread gets me pretty excited.” The toppings are the fourth point. They can be fresh and tasty or old and dry. Some places add special ingredients. For instance one includes Turkish soft cheese to its kebab.

It is time for the inconvenient truth: On average, the doner kebab sold in Berlin is worse than people might think. “I would say there is really a lot of low quality doner. Most of it is. That is part of the reason why it has so much appeal. It’s cheap, it tastes o.k., but it’s kind of crappy quality.” At the same time, there has only been one place Brett Myers found that had low quality doner which also tasted bad. Of course it got a very low rating on ‘Dönerstag’.

The exact opposite, of course, would be those high-end doner places like ‘Hasir‘, which Brett Myers has not gotten to yet, or his favorites ‘Rüya’ and ‘Tekbir’. This is where the good stuff is being offered and eaten.

Of course there are more doner kebab places that stick out. At certain corners in Berlin, people stand in long waiting lines, from Kreuzberg to Leipzig, in order to get their veggie kebab. Many kebab lovers who have not tried believe this kind does not contain meat. “It’s a common misconception”, Brett Myers says. “They put fried vegetables in it, but they also add chicken.”

Today, the American Berliner does not eat that much doner kebab anymore. No, he has not gotten sick and tired of it. But “the novelty has worn off a little”, after one year. Besides, Brett Myers likes other kinds of food too. For instance, he loves going to his favorite Chinese and Italian places. He calls himself a “foodie”, also because he keeps on discussing food with people in all kinds of forums.

‘Dönerstag’, Brett Myers’ doner kebab blog, has a 10-point evaluation system and three sections. One is for doner kebab, the next one for ‘Gemüse (veggie) kebab’, and there is one for ‘Döner Deep Dives’. So, what could he be diving into? Sauces.