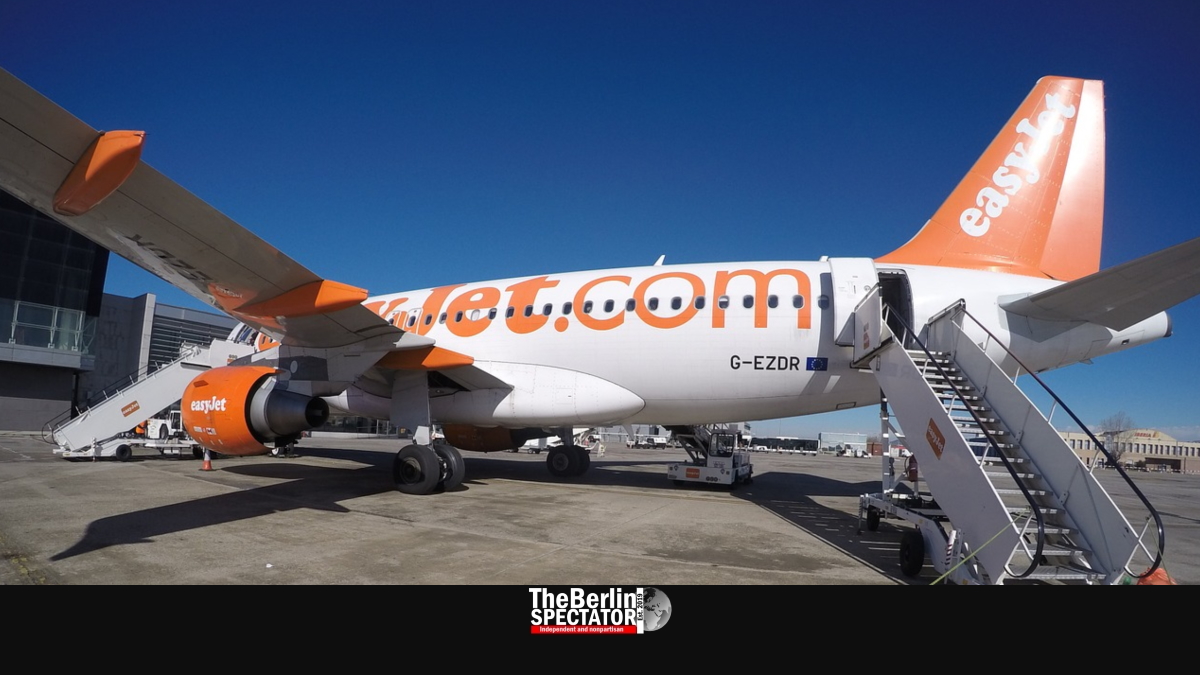 EasyJet is about to reduce the number of aircraft it uses at the airports Schönefeld and Tegel in Berlin and neighboring Brandenburg. Jobs will be lost. But at those airports themselves, the airline’s return to the skies is being celebrated.

FBB, the operator of Schönefeld Airport in Brandenburg and Tegel Airport in Berlin, sent out a press statement which says EasyJet had just revived its flights on 39 routes. By August, the airline would cover almost three fourths of the routes it had flown before the Corona crisis.

To FBB, those developments are a cause for rejoicing, which might be understandable after more than three months during which there hardly were any flights at all, thanks to Corona. “The airline plans to take off from Schönefeld with five aircraft, and from Tegel with four”, FBB said. Later this summer, they would be back at 50 routes.

“Customers do have the choice between flights to city and beach destinations. Those include the metropolises Barcelona, Paris and Amsterdam.” For the first time, Crete was on the flight plan. Not to mention holiday destinations like Tenerife or Fuerteventura.

‘Biggest Customer is Back’

“We are glad our biggest customer is back at Tegel and Schönefeld with almost 40 connections”; FBB’s CEO Engelbert Lütke Daldrup said. “This is important and good news for the airport location, the economy and tourism in the region.”

EasyJet’s Country Manager in Germany, Stephan Erler, was quoted in FBB’s press statement. “We are glad we can finally take off again”, he stated. Erler talked about “a choice of fascinating destinations” and provided a list of cities and countries his airline will fly to again. But he did not volunteer information about any decrease of the number of aircraft based at those two airports in Berlin and next door, about the cancellation of routes or about layoffs.

The RBB reports, steps of that kind had been announced in an internal EasyJet statement that had been accessible to the public by accident. According to the document, 16 out of 34 aircraft which used to be based in Schönefeld and Tegel will be pulled out. A total of 738 flight attendant and pilot jobs would be lost, it says. At this stage, EasyJet employs 1,540 people in and around Berlin. It looks like half of them will be without job soon.

In the airline’s internal document it says the Corona crisis had intensified “challenges” that had prevented the airline from being profitable in Berlin. The rest of the EasyJet network was not able to compensate the losses caused by the Berlin bases anymore. According to the RBB, the airline has already started consultations about downsizing its bases with the staff council.

In the internal statement Stephan Erler announced an end to domestic flights within Germany too. Originally, those flight connections were supposed to be revived in early September. Even though Berlin was “strategically important”, EasyJet had no choice but to adjust its fleet and crew size to the demand in the present and future, Erler’s statement read.

The Corona crisis affects the entire airline industry. Lufthansa was just bailed out with 9 billion Euro (9.87 billion U.S. Dollars or 8.09 billion Pounds Sterling), Airbus announced it would cut 15,000 jobs. These are only two of many examples for the kind of issues Corona caused.

EasyJet’s flight route cancellations will decrease FBB’s income. This is definitely bad news, especially four months before BER Airport will be inaugurated, with a slight delay of nine years. The timing could not have been ‘better’. And the virus is to blame. Just last year, RBB had annouced record passenger numbers. The 35 millionth passenger for 2019 was given prizes on December 20th.