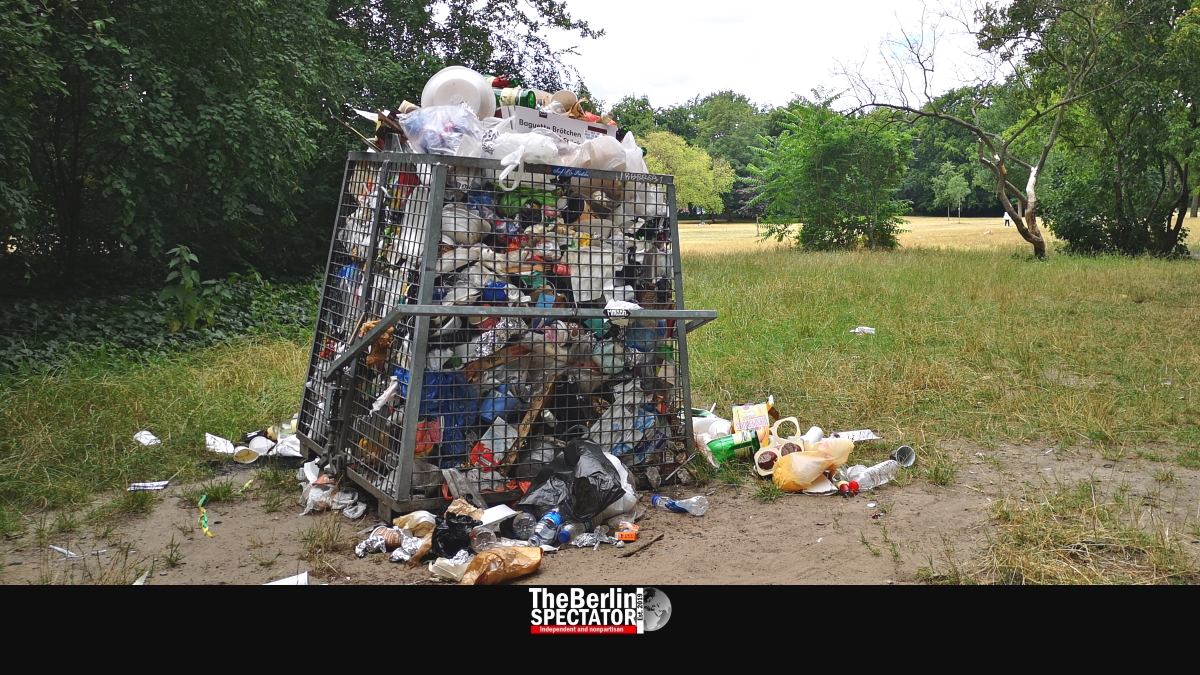 At several parks in Berlin, parties led to police operations last night. One festival was shut down. Party folks left a lot of trash at ‘Hasenheide’ park.

On Sunday morning, a lady in her early thirties came to the park with her three-year-old son. She did not like what she saw there. “All the trash and the glass keeps me away”, she told The Berlin Spectator. “I hardly come here anymore.”

There is another reason: “I can’t let my son run around and play here anymore because of the utensils drug addicts leave in the bushes.” The drug problem is being caused by the dozens of drug dealers who have been selling their illegal substances at the park for many years. The drug problem is old, the party problem is new. Since the Corona pandemic hit, Berlin’s clubs have been closed. As a result, party people go to parks.

Another lady at Hasenheide came with a workout group this morning. Every Sunday, they do gymnastics on one of the park’s huge lawns. “I think this is sh*t”, she stated. “At least those people should clean away their waste.” The problem she mentions is obvious. Early on Sunday morning, the dog owners and joggers who appeared saw dozens of party people who slept in the park. Their waste was scattered all over the place.

Broken bottles were seen on the tarred paths, trash of all kinds on the lawns. Used toilet paper and items the author does not want to describe were seen in the bushes around the main lawns. “The broken glass is a problem for cyclists, dog owners and children. If they can’t control themselves, they should not party here at all”, a pedestrian who walked the park with a tiny dog said earlier today. Volunteers cleaned up part of the mess in the late morning, by placing some of the bottles next to the park’s full trash containers.

What the party people leave behind is one issue, the noise another. Also there is something called Corona. Drunk or stoned people who are busy celebrating do not care about distance rules, broken glass, trash or anything. That is why the Berlin Police Department was quite busy again last night.

At ‘Mauerpark’, ‘Park am Gleisdreieck’ and ‘Volkspark Friedrichshain’, they stopped parties because people did not keep their distance. Hundreds of people danced to monotone techno sounds in each of those parks.

Police officers also ended the ‘H13 Festival’ at the ‘HaselHorst13’ venue in Spandau, the ‘Tagesspiegel’ daily reports, because the event was not registered with the authorities. The organizers are furious. They say they want to sue the city state of Berlin, because the hygiene rules had been adhered to. A permission had not really been needed, they say.

At Hasenheide park, not all parties were uncontrolled. In one case, a bunch of party folks danced in a labelled area and promised two police officers on site they would end their party at 8:30 p.m. on Friday. They also cleaned up their trash and did not sh*t into the bushes.