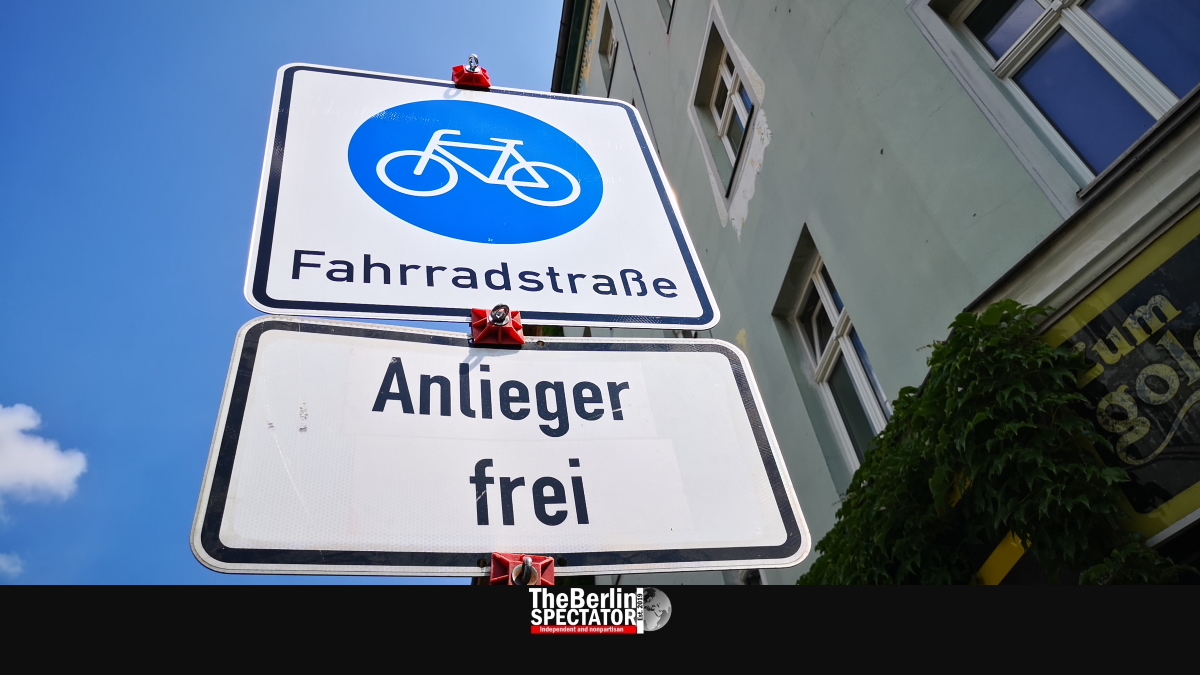 A new Bicycle Street that was installed in Berlin’s Kreuzberg district the other day disappoints. For instance, hardly anyone notices the signs or knows what they mean.

At the southern end of Berlin’s new Bicycle Street, one thing becomes evident: This is a provisional measure. The sign at ‘Körtestrasse’ was not fixed to any post drilled into the ground, but to one with a metal foot that can be carried away. The same applies to all other ‘Bicycle Street’ signs between the ‘Südstern’ subway train station and ‘Mariannenplatz’.

But this is the least of the problems. The fact that hardly any motorist knows — or wants to know — what the signs mean is worse. Every few minutes, a car with number plates from places other than Berlin enters Körtestrasse, even though Bicycle Streets may only be entered by cars whose drivers live right there, in the neighborhood. The big copy of the sign which was sprayed on the street with a template some 300 meters (1,000 feet) further does not help, because motorists who see it will already be driving along the Bicycle Street illegally.

‘Körtestrasse’ was bicycle-compatible even before it was officially converted into a Bicycle Street. Here, the measure does not seem to make any difference at all, also because of the sloppy way the provisional signs were placed. The same applies to the stretch on ‘Grimmastrasse’. Again, the signs do not make any difference compared to before.

Further north, at the intersection with ‘Böckhstrasse’, an ambiguous sign tells cyclists to turn right, in order to stay on the Bicycle Street. It does not really become clear whether the route continues on ‘Böckhstrasse’, on ‘Planufer’ or, as the RBB reported the other day, on ‘Fraenkelufer’ on the opposite side of the canal.

The latter route would make even less sense than the entire endeavor, because it is a one-way street in the wrong direction with a cobblestone surface. The sidewalk is not wide enough to support both pedestrians and cyclists, also because the little hut the police are using to guard the local synagogue 24/7 stands in the way. It is a shame that protecting Jewish facilities is even necessary in this country, 75 years after Nazi Germany’s defeat. But it is.

Rules in Bicycle Streets:
– Cyclists have the right of way.
– They may ride along the street next to each other.
– Motorists have to adapt to the cyclists’ speed.
– Only motorists who live right there may enter.

It looks like this point, the northern end of Grimmastrasse, is not really connected to the next stretch of the new bike route through Kreuzberg, which is fine. The question is why the Bicycle Street route was even announced if part of it is not there — or not there yet.

Yet another issue is the traffic sign chaos the district created. At the ambiguous sign at ‘Böckhstrasse’, there is a forbidden entry sign as well, which says the stretch was a ‘playing street’ reserved for children, on Wednesdays from 2:00 to 6:00 p.m., but only from April 1st to September 30th. Also there is another sign which makes ‘Böckhstrasse’ a ‘playing street’ 24/7 and 365/12. What a chaos.

The Bicycle Street, which is actually a bicycle route consisting of several streets, continues at ‘Mariannenstrasse’, a one-way street for motorists that was just converted as well. Here, nothing has really changed either, since this street, like all others mentioned, was a 30 km/h zone (18.6 mph max) already, and cars that are not allowed to enter use it anyway.

At one of the last stretches towards ‘Mariannenplatz’ square, danger awaits cyclists. Berlin’s main public transport provider, the BVG, sends a lot of buses through this part. There is one every 2 minutes. These buses are substitutes for the ‘U-Bahn’ trains that usually connect ‘Kottbusser Tor’ station to ‘Warschauer Strasse’ during the ongoing renovation work on the train tracks. The buses make right turns onto ‘Skalitzer Strasse’ and endanger cyclists even more by doing so. Many deadly accidents involving cyclists are being caused by heavy vehicles, mostly trucks, but also buses, that make right turns.

The way The Berlin Spectator tested what is supposed to be a new Bicycle Street — or route — might not be scientific, but the result is disappointing. Taking more time, setting up the signs properly, adding ‘no entry’ signs for motorists who have no clue, spraying more visible information on the street and getting rid of some of the gazillion signs at all intersections would have helped.

To the district, the main aspect obviously was to get the conversion done quickly. So, they sent sent some people whose mission it was to put up any signs anywhere. At least this is what the whole thing looks like. A proper traffic policy or measure looks different. The obvious abbreviation for Bicycle Street says it all: BS.