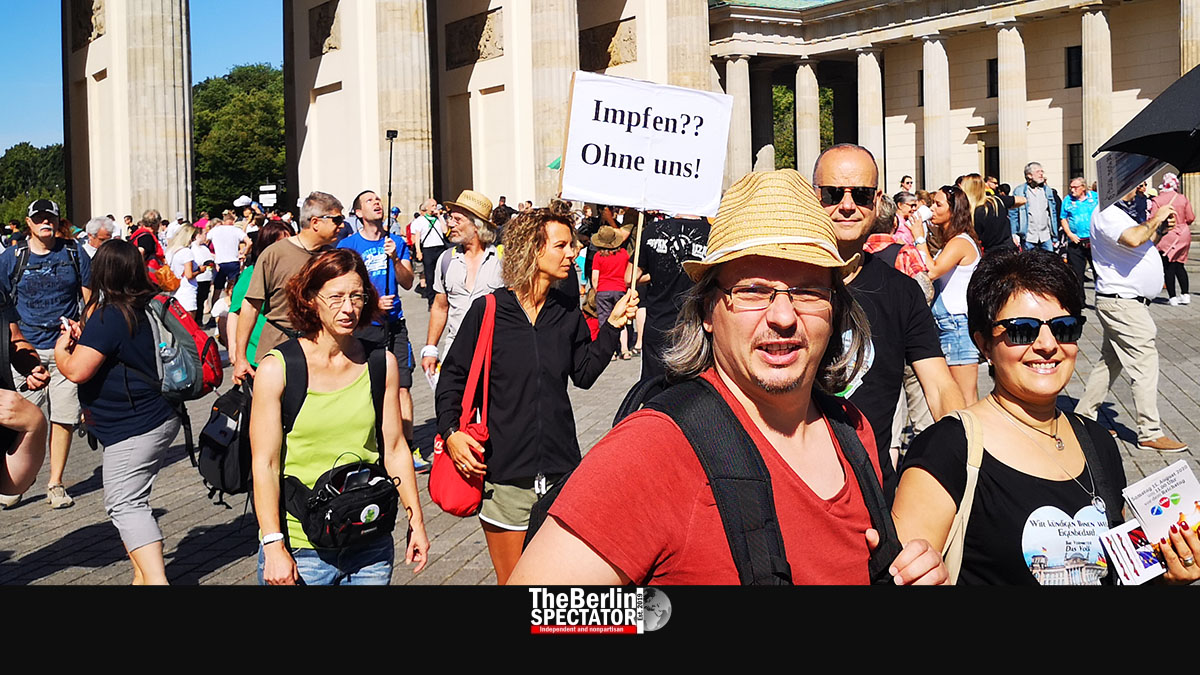 In Berlin, police were dealing with as many as eighty protests on Saturday. The largest one was staged by Corona deniers in cooperation with right-wing extremists. Several police officers were injured while ending a rally at Berlin’s Victory Column.

In Berlin, thousands of people joined a protest against the government’s Corona rules on Saturday. They denied the existence of the Coronavirus. Many protesters came to the German capital from other parts of the country, including the federal state of Baden-Württemberg, which is hundreds of miles away.

According to police, 3,000 people were part of the protest that started at 10:30 a.m. CEDT. More people joined later, including many followers of the movement ‘Querdenken 711’. They were celebrating “the end of Corona” on what they called a “day of freedom”. Up to 17,000 participants were on the street in the early afternoon.

Those Corona deniers were joined by far-right extremists, including famous figures. He is a former primary school teacher from Berlin who was fired for spreading extremist and antisemitic propaganda. For instance, he kept on claiming there was a “global Zionist-Jewish conspiracy” against the rest of the world.

Udo Voigt was at the protest as well. He used to be the chairman of the nationalist right-wing NPD.

It is not the first time haters join protests of Corona deniers. During the first phase of the ongoing pandemic, this happened at several rallies at Berlin’s Rosa Luxemburg Square and elsewhere.

Some of the participants of today’s protest were aggressive. Two men with a sign saying “Against forced vaccinations, against Bill Gates, the WHO and George Soros” accused The Berlin Spectator’s reporter of being “left-wing” and of wearing a mask “for no reason”. Another protester told him the mask was “unnecessary and ridiculous” because there was no virus.

Police asked the participants at the rally to keep their distance to each other and wear masks, but nobody did. The Police Department’s request was spread via loudspeakers and Twitter. After 2:00 p.m., the police threatened to end the protest and to disperse the crowds because the Corona rules were not followed. Then, the organizers officially ended it. For the same reason, a criminal complaint was filed against them.

Another official rally took place at the Victory Column in the afternoon. Again, hardly any participant adhered to the Corona rules. At 5:30 p.m., Berlin’s Senator of the Interior, Andreas Geisel, announced the event would be ended as well, for the same reason. Police took people away from a stage and the area around Victory Column. Eighteen police officers were injured in the process. Three of them needed to be treated at hospitals.

Some counter protests took place too. For instance, the group ‘Grannies Against Right-Wingers’ staged its own rally. So did an ‘Antifa’ faction. Right in front of Brandenburg Gate, they set up loudspeakers on top of a van, while the Corona deniers were still walking by.

An ‘Antifa’ speaker slammed conspiracy theorists, but accused the police of abusing contact lists restaurants are supposed to keep in case of Corona outbreaks. Critics saw that accusation as a conspiracy theory of a different kind.

All in all, 1,500 police officers were dealing with a total of eighty registered protests. Some of those had one to ten participants, others thousands. Originally, the Corona deniers had said half a million people would join their rally. Later they slightly decreased that number to 10,000. In the end, there were up to 20,000 people at the rally at Victory Column.