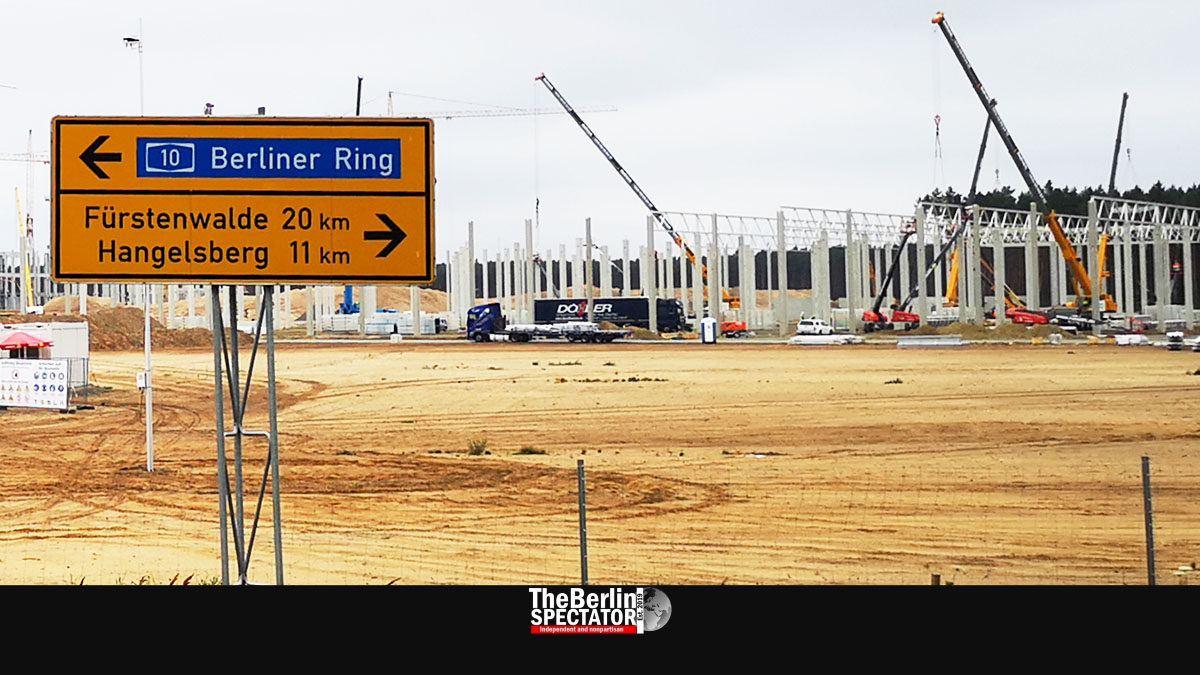 Seven months ago, a tree plantation covered Tesla’s premises in Brandenburg. Now the skeletons of several factory buildings are already visible. What is certain is that Tesla is not wasting time.

Keeping up with a Tesla Model S is a mission impossible for virtually all other cars on the market. Recently, the Chinese car portal Dongchedi wanted to settle the big question: Who is today’s king of the road? So they set up some races and a range competition between the Porsche Taycan, a fully electric ‘Tesla killer’, according to some German-language publications, and both a Model S and Model 3. In all cases, even the smaller Tesla Model 3 won and became a ‘Porsche killer’. The roles were reversed.

As it turns out, it is not only the cars nobody can keep up with, but also the construction speed Tesla is demonstrating in Freienbrink, an industrial park in Brandenburg, located to the south of Berlin. First, there was a pine tree plantation. When it disappeared about as quickly as a Model S races from New York City to Fremont, the enormous premises for the ‘Gigafactory’ became visible.

Now, just a few months later, the skeletons for three large factory buildings have already popped up. Neither a global pandemic called Corona could stop or slow down the construction, nor the lack of a construction permit. The latter will not be given to Tesla for now. Until yesterday, a new version of the plans for the factory was accessible to everyone at several locations in Brandenburg and online. Now, objections can be handed in until September 3rd, 2020.

One Truck Every Few Minutes

Once that is done, the objections will be discussed publicly with Tesla representatives. This is supposed to happen in late September. Only once this process is completed, the Brandenburg authorities can finally issue a permit. By the time they do, the three factory buildings will have made more headway. At this stage, Tesla is building at its own risk, meaning if they do not get any permit, which is very unlikely, they have to remove everything they built, and put the pine tree plantation back in place.

On a rainy Monday in early August, yesterday, the Freienbrink industrial park was already being dominated by Tesla. On the ‘L38’, a rural road that connects the ‘A10’ Autobahn to the Spreetal settlement, countless huge trucks keep on heading to the giant Tesla construction site. There is one every few minutes. And yes, those trucks are being powered by Diesel engines. They look like they are moving sand out of there.

Security is tight around the premises. Several guards at the freshly paved road, which is the main access to the site, will approach anyone who sets his or her foot there for a millisecond. Even on the other side of the construction site, where hardly anyone goes, any visitor who does moves around, even outside the fenced area, will be approached by “two American guys who look like agents”, a person who met them told The Berlin Spectator.

If Tesla keeps on building its European factory in Brandenburg province this quickly, the Californian company might actually reach its goal, which is manufacturing cars starting in a year from now. Apart from the ‘Berlin Model Y’, CEO Elon Musk intends to manufacture a new line of batteries in Freienbrink. For now, they are pretty secretive about those. Another detail is the kind of paint job Teslas made in Germany will be getting, at “the most modern paint shop in the world”. The paint will be applied in several layers, and make those vehicles stand out.

Well, the entire endeavor is already standing out. While serious competitors like Porsche or Volvo’s Polestar brand are only beginning to sell vehicles, Tesla is turning into a globally established big player with factories all over the place. And, thanks to the Americans, Brandenburg is becoming more of a high tech province than it already was with thousands of new jobs.