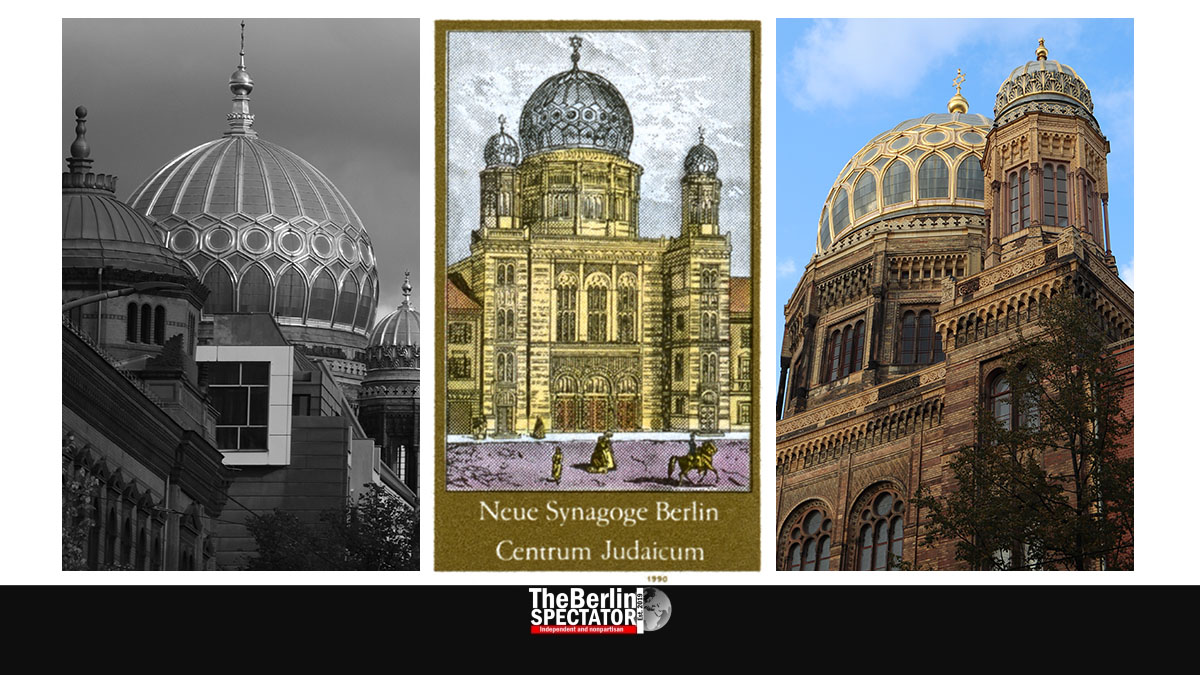 For many reasons, Berlin’s New Synagogue is a very special building. First of all, its beauty is undeniable. Also, it is of high importance to Berlin’s Jews as well as their history. And it survived the Nazis.

There was an ‘Old Synagogue’ in Berlin’s ‘Heidereutergasse’ in the 1850s, when the number of Jews in the congregation grew substantially. Back then, the situation called for a new synagogue. In 1856, the congregation purchased a property in ‘Oranienburger Strasse’, located in a very Jewish neighborhood. It seemed to be just the right place for the project.

It was the spring of 1857, when a commission headed by Eduard Knoblauch started an architecture competition for a new synagogue. None of the entries were convincing, which is why Knoblauch ended up designing and planning the temple himself. Friedrich August Stüler took over when Knoblauch became too ill to continue.

On May 20th, 1859, the construction commenced. The New Synagogue was completed seven years later, on September 5th, 1866, which was Rosh Hashana, the Jewish New Year’s day. It turned out to be impressive and beautiful, both its interior and its appearance from the outside. In fact is was so impressive and exotic, regarding its style, that even some Jews complained. They said the temple would not help the integration of Jews into society.

But most Jews were happy about the New Synagogue, the costs for which had sextupled during the construction period. So was the great German author Theodor Fontane who recommended a visit at the new Jewish temple to anyone interested in architecture.

The congregation picked Rabbi Joseph Aub, a reformer. Not everyone agreed with the way the reformer conducted the prayer services. Some members opposed the use of the big organ which was installed in 1868. At some point, the congregation split in two. Conservative Jews formed their own in 1869. Today, 150 years later, the Jewish congregation at the New Synagogue is a conservative one.

During the Night of Broken Glass on November 9th, 1938, an antisemitic mob consisting of members of Hitler’s paramilitary organization ‘Sturmabteilung’ (SA) wanted to set the New Synagogue on fire. They did not expect to meet a policemen like Wilhelm Krützfeld.

He stopped the Nazis, by telling them the building was under monument protection, and called the firefighters who extinguished flames that had already done damage to the interior. Krützfeld prevented the New Synagogue from being destroyed. A plaque on the building commemorates him. In Schleswig-Holstein, a police academy carries his name.

When Berlin was bombed, the New Synagogue sustained damage in November of 1943. After the war, parts of the house of God were used as material for other buildings. In 1958, the GDR authorities had damaged parts of the building removed. They cited a danger of collapse as the reason. In the end, not much of the New Synagogue was left.

But in November of 1988, shortly before the end of the GDR and communism in Europe, the authorities in East Berlin started reconstructing the New Synagogue. They had even employed an American rabbi who was spied on by the housekeeper they provided to him. After Germany’s reunification, the reconstruction continued.

Twenty-five years ago, on May 7th, 1995, the New Synagogue was finally reopened. Today, it offers a museum with an exhibition about Jewish life in Berlin and the temple’s history. Regular prayer services are being conducted by Rabbi Gesa Ederberg.

For the 25th anniversary of the reopening, Governing Mayor Michael Müller said the New Synagogue was an indispensable part of Berlin and one of the city’s Landmarks. It symbolized the history of the Jewish community as well as its affiliation with Berlin.

Josef Schuster, the President of the Central Council of Jews in Germany, said he remembered the first time he had looked at the New Synagogue. Back then he had been moved by the fact that Judaism had finally been “visible in Berlin, the city in which the annihilation of the Jewish people was planned and managed during the so-called Third Reich.”