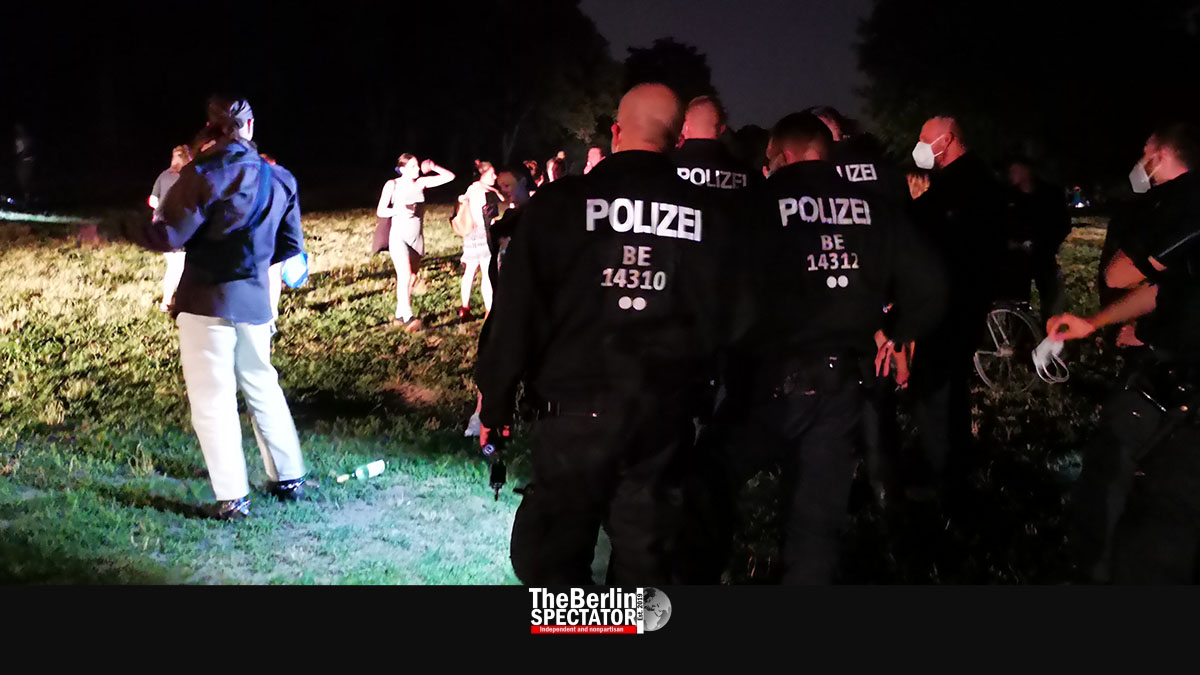 In Berlin, dozens of police officers expelled hundreds of party people from ‘Hasenheide’, a large park in the German capital’s lively ‘Neukölln’ district. The police operation, not the first one at that location, continued into today’s early morning hours.

At high temperatures, even at around midnight, people celebrated on large pastures at ‘Hasenheide’ park, in countless groups. They drank alcoholic beverages they had brought in cooling bags. Some party folks had even set up inflatable kiddie pools in which they cooled down, half naked.

Many of the party groups had taken loudspeakers to the park as well which spread beats. Some of the party people were clearly drunk or stoned, others seemed sober. The smell of Marihuana faded when the police came closer. Most cops entered the park from ‘Columbiadamm’ in the south and asked everyone to leave. Those who complained got expelled from the premises officially. One police officer jostled a young man away from the location.

The officers cited noise and complaints from neighbors as the reason for sending everyone away. But those frequent parties at ‘Hasenheide’ and other Berlin parks have been causing more issues for several weeks now.

First of all, intoxicated party people generally do not follow Corona rules, meaning those parties are seen as a danger to all participants, their families and everyone else because of the ongoing pandemic and the danger of infection. On top of it all, the party crowds frequently leave behind a lot of trash and they use the bushes as toilets.

Berlin’s famous (and infamous) clubs have been closed since March, due to Corona. Those park parties are a substitute for those wild nights that used to take place there, in pre-Corona times. To a lot of mostly young people in Berlin, parties seem to be some kind of a religion they cannot — or do not want to — live without.

Every Saturday, police allow a ‘controlled party’ with loud music to take place at one location at ‘Hasenheide’ until 10:00 p.m.. But they are obviously not accepting uncontrolled, ‘wild parties’ all over the park anymore.