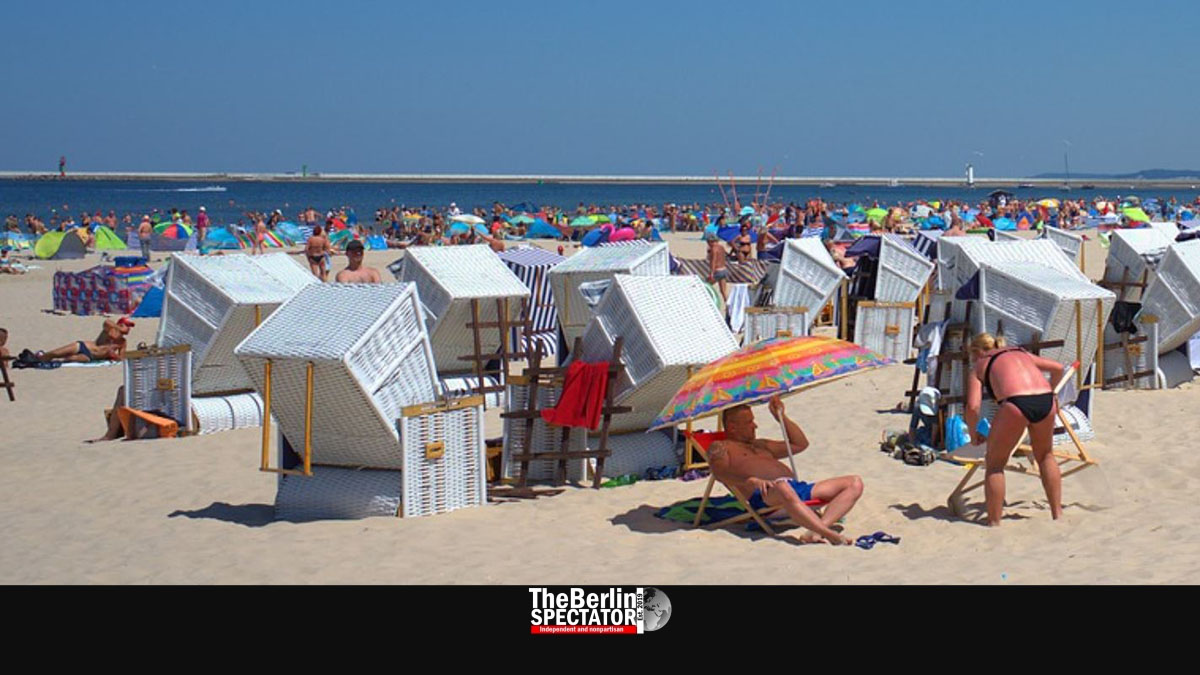 Germany was hit by a heatwave earlier this week. Its peak was registered on Saturday, with temperatures of up to 38 degrees Centigrade (100 degrees Fahrenheit) in parts of the country. Beaches and pools were crammed.

Beaches along the Baltic Sea and North Sea were overcrowded on Saturday, as a heatwave had Germany under its grip. In the Bay of Lübeck, all fifteen beaches available, and their parking lots, were as full as they could be, especially in Corona times.

This situation had to do with the current weather, but also the fact that most Germans refrained from spending their summer vacations abroad, because of the Corona pandemic. Germany’s Baltic Sea and North Sea beaches can be rather windy and cold, but not on days like yesterday.

In Schleswig-Holstein, the northernmost province in the area of former West Germany with both North Sea and Baltic Sea access, and in Mecklenburg-Hither Pomerania, several breaches needed to be blocked because, with even more people, the distance rule could not have been adhered to anymore.

The First Minister of Schleswig-Holstein, Daniel Günther, asked vacationers not to head for the federal state’s beaches only, but also to midland locations. At Lower Saxony’s North Sea beaches, the situation was hardly better. People still headed towards Norddeich Beach when it was already full.

All ferries to the East Frisian Islands were overcrowded as well. Additional ships were put in service because of the number of people heading there. According to the authorities all over the German coast, it was hard to enforce the Corona rules on Saturday, because the crowds were huge.

Traffic Jams on A1 and A7

Many Germans and other travelers got stuck in traffic jams on the Autobahn today, especially up north. This especially applied around Hamburg, Hanover and Lübeck. On the A1 freeway, those who headed north caused a congestion over a stretch of almost 20 kilometers (12 miles) near Hamburg. Things did not look much better on the A7.

Down south, in parts of Baden-Württemberg, and in the region around the Rhine river, up to 38 degrees C (100 degrees F) were measured. Berlin experienced 35 degrees C (95 degrees F). Due to the heat, riding a bicycle from Neukölln to Schöneberg, a harmless distance of 5 kilometers (3 miles), felt like doing the Tour de France several times in a row.

The German Lifeguard Association asked people to be careful in any kind of waters, and to refrain from swimming around floodgates, at ports or in canals, which is forbidden. Since this year began, 193 persons have drowned in Germany. The latest victim was a man who had entered Berlin’s ‘Teufelssee’, a lake located in ‘Grunewald’ forest, on Saturday. He was pronounced dead after firefighters found him submerged in the water and tried to revive him for half an hour.

In Berlin, all public swimming pools and bathing beaches at the capital’s lakes were crammed. Because of the Corona pandemic, anyone who wanted to go to pools needed to purchase ‘time slot tickets’ online. By selling those, the operators can set maximum numbers of visitors and make sure the distance rule is being followed.

Because the the heat, the danger of forest fires in the Berlin Brandenburg region is extremely high. The authorities keep on warning people not to light fires or throw glowing cigarette butts out of car windows.