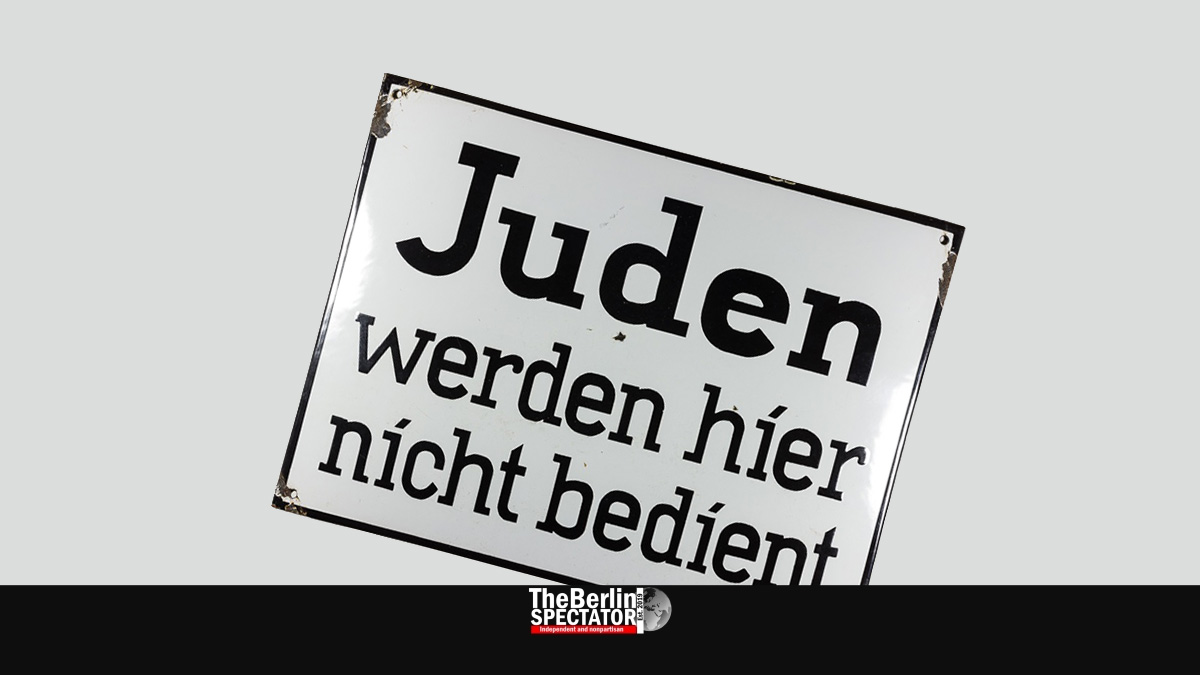 Seventy-five years after the defeat of Nazi Germany, antisemitism in its successor state is proliferating. The Federal Office for the Protection of the Constitution is about to present a report the content of which is frightening.

Five centuries ago, Jews in Europe were accused of poisoning the water in wells. Eight decades ago, the Nazis made them responsible for a ‘world conspiracy’ and murdered six million of them. Today, Jews are still confronted with hate in Germany. It comes from several directions.

The radical right continues hating Jews, just like its idols, the original Nazis did. So do parts of the radical left and Islamists. Right-wing extremists keep on accusing “the Rothschilds”, “George Soros”, “parasites” or “Israel”, meaning the Jews, of a worldwide conspiracy.

On the very left, the Nazi’s call “Don’t buy from Jews” was revised to “Don’t buy from Israelis”. The antisemitic BDS movement is big in Germany. In these circles, terrorism is being supported as long as it targets Jews. Members of the movement of hate appear at events connected to Jews or Israel, including film festivals, and bully its participants.

Attacked on the Street

The antisemitism coming from Islamists is dangerous too. Jews are being attacked on the street. During rallies, including the annual Al Quds March, an annihilation of Israel is being demanded on a regular basis.

Jews who can be identified as such, for instance because they wear Kippahs, cannot walk through certain parts of Berlin without being bullied. Young Israelis have been attacked on the street for speaking Hebrew to each other. The police has to guard all Jewish facilities, including synagogues and schools, 24 hours a day. And all of this is only the tip of the iceberg. The situation, 75 years after the liberation of Auschwitz, is unbearable.

On Monday, the Federal Office for the Protection of the Constitution will release a report that shows: Things are not improving, but getting worse. In 2018, there was a 71 percent increase regarding right wing extremist crimes with an antisemitic background. For last year, a rise of 17 percent had to be added, as Thomas Haldenwang, the authority’s President, just told the ‘Süddeutsche Zeitung’ daily in an interview.

“In the everyday life of Jewish citizens, this means they are subjected to insults, threats and attacks”, Haldenwang stated. It is not the first time a report or study documents the rising Jew hatred in today’s Germany. According to the authorities, 287 antisemitic crimes were committed in the first quarter of 2020.

The 100-page report scheduled to be released tomorrow identifies a “new right” in Germany. In the interview, Thomas Haldenwang said it was part of the cause of the rise of antisemitism. “In these circles, they work with hints”, he stated. “This became evident during protests against the Corona rules at which participants cited a ‘world conspiracy’ that was ‘controlled by interests on the U.S. East Coast'”.

These kinds of statements consist of code language that blames Jews, according to Haldenwang. Disguised antisemitism was dangerous as well, he said. Civil society needed to oppose antisemitism in everyday life, including at schools and soccer stadiums.

Hatred, including antisemitism, leads to violence. Last year’s most shocking example was the attack against the Synagogue of Halle. The culprit, a Nazi, intended to murder Jews who were observing Yom Kippur, a Jewish high holiday. When he noticed he could not open the door to the temple, he shot and killed a passer-by and a man at a doner kebab restaurant.