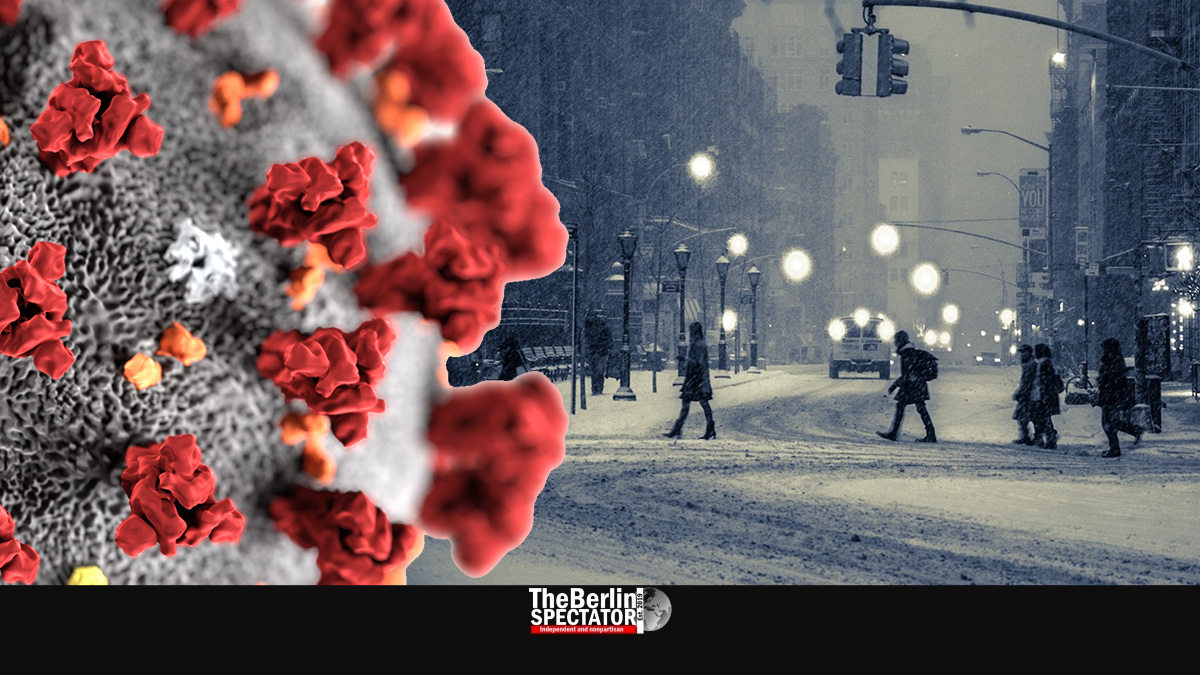 In Central Europe, including Germany, the next season, namely fall, is six weeks away. Today’s issues will probably seem harmless in retrospect once we get there.

Berlin, August 10th, 2020 (The Berlin Spectator) — It is summer. A heatwave with temperatures of up to 100 degrees Fahrenheit (38 degrees Centigrade) is hitting Germany. Most people are trying to do it all outdoors, because of the weather, and for other obvious reasons. Corona remains the elephant in the room.

Restaurant visits with friends feel sort of safe at outdoor tables. Indoors, they do not. There have already been several reports of local Corona outbreaks in pubs and restaurants, caused by parties people celebrated indoors. For now, we have the choice. But who will sit at outdoor tables, in spite of the cold, the rain and the wind, in a few weeks from now?

Even now, in spite of the fact that many Germans are trying to avoid public transport, because of the danger of infection, trains. trams and buses can be rather full. Besides, there is always some Corona denier who refuses to wear a mask. Especially men above 40 seem to be having an issue with covering their noses as well. If this is the summer situation in public transport, what will things look like in fall and winter?

The nice little birthday party, which took place outdoors the other day, will be celebrated indoors in November. The party crowds in Berlin and elsewhere dance and drink in parks. But they won’t in December. Open air cinemas seem pretty safe. But where will people watch those flicks in January?

Our important meeting or family reunion will have to take place indoors soon. The little drink we want to have with friends will not be served outdoors in February. Will the windows be opened during press conferences in March? Hopefully. Will it help to get rid of dangerous aerosols? Probably not.

A convincing plan is needed. With the exception of conspiracy theorists, we all know what the Coronavirus is capable of. We also know what a semi-lockdown feels like and why it was necessary in March and April. We know another lockdown would crush the economy, and a growing number of people would probably not accept a new round.

But there are many things nobody really knows. How bad will things get at Germany’s schools? The first taste of it was visible in Mecklenburg-Hither Pomerania last week, the first state that ended its summer vacation. Just days into the new school year, two schools had to be shut down because the virus spread again.

The Berlin government and the federal states should come up with a plan B for schools and other ideas for the cold season. Lower temperatures might not be the only problem. What will happen once Corona mixes with colds and the flu?

Learning from the situation in other countries, finding a way to make people wear their masks properly, or at all, and employing more people for the health authorities would be a start. The latter will likely have to track and break many more infection chains soon. But a lot more than this is needed.

In case of emergency, should many Corona outbreaks occur, and should things generally turn south, the authorities need to be prepared to react quickly, by ordering new lockdowns and other measures that might not be popular but helpful. A plan is needed, one that includes all ‘ifs’, along with useful answers.