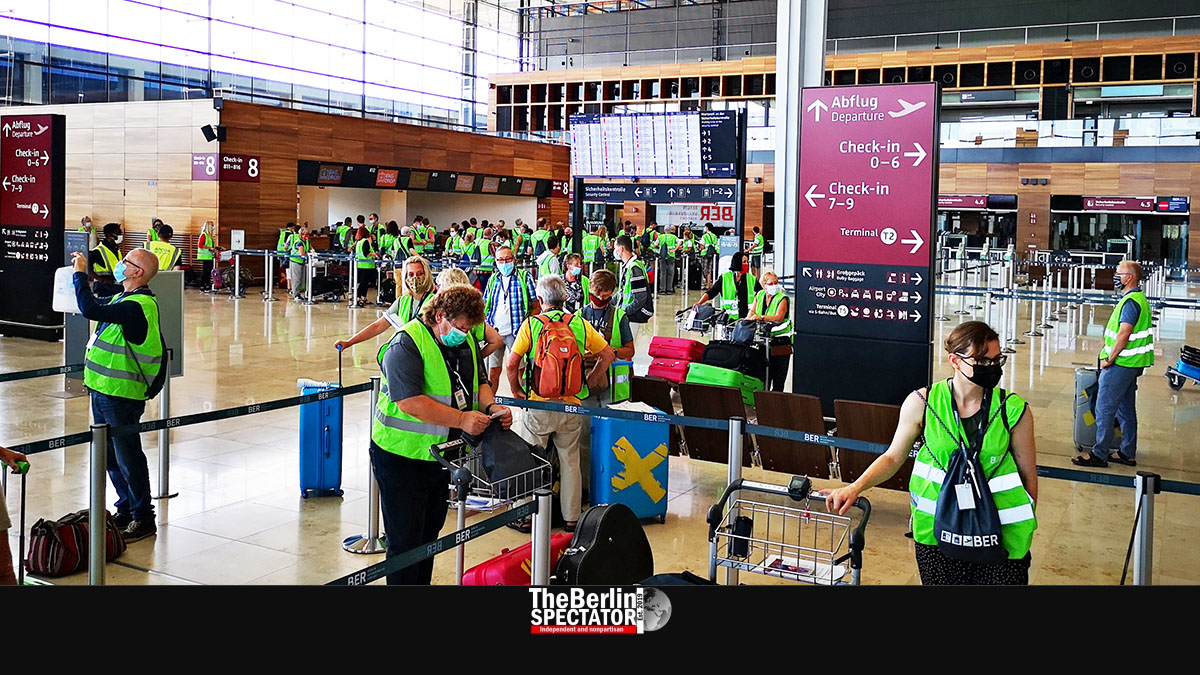 In the Berlin-Brandenburg region, BER Airport is 72 days away from being inaugurated. Right now, hundreds of volunteers are testing it by taking imaginary flights. Our reporter was among them.

Its official name is ‘Flughafen Berlin Brandenburg Willy Brandt’. Its IATA code is BER. Its opening date is October 31st, 2020. Things seem to be working quite well over there, at the new airport in Schönefeld, a municipality in Brandenburg, located just south of Berlin.

When the volunteers came in on Thursday morning, they received documents that explained their mission. People were supposed to go to several places, including Düsseldorf and Poznan. They had to pick up suitcases from the rather large baggage claim on level zero of BER’s elegant Terminal 1 and proceed to the check-in counters upstairs.

Warm juice and water was offered to the volunteers when the waiting game started. The day did not pass too quickly because the boarding card printers needed to be prepared first. After quite a while, those who finally got theirs had to look for their gate.

This was when the size of Terminal 1 became evident. First, a real security check needed to be passed for those fake flights. As it turned out, the walk from there to Gate A32 took ages. I do admit that Frankfurt Airport is worse. In 1976, a man needed to transfer from Terminal A to Terminal C. He arrived there in 2012, thirty-six years, one month, 28 days and two hours after his connecting flight left.

But as a volunteer who wanted to see as much of BER Airport as possible, I was actually glad I needed to move a lot. A short but nice looking man conveyor, located somewhere between A20 and A30, helped a little. Once everyone else was finally present at Gate 32 and the flight was called, we had to board a bus.

From the vehicle, the volunteers had a good view of the tarmac that is being used as a parking lot for countless Airbus A320 aircraft owned by EasyJet. The problem is that parked passenger jets need to be flown every 10 days, for technical and safety reasons. The airlines are spending a lot on parking fees, on pilots who take the aircraft up into the skies for a few spins, and on kerosene.

But our bus did not grow wings. Some volunteers had to sit there for 45 minutes until everything was ready for the baggage claim scene. Indeed, the whole thing was almost like a movie. Sure, ‘Airport ’77’ or ‘Passenger 57’ are far more suspenseful than a slow rehearsal day at BER Airport, but the mission was important.

The only real complaint was the warm drinks and the fact that the whole thing dragged on forever. There should have been a director, a Hitchcock clone who would have shouted “Action!” or “Cut!”. And it would have been good to have some fridges.

Absolutely nothing happened on the tarmac. Once in a while, outgoing flights could be seen on the other end of the enormous area, where Schönefeld Airport is located. This old GDR airport will be converted to Terminal 5 of BER Airport within weeks.

The train station right underneath the new airport may not be beautiful, but it is impressive. Once that place is up and running, long-distance trains, Berlin’s ‘S-Bahn’ city trains and a new Airport Express train will enter it every few minutes. (Read separate piece ‘How to Get to Berlin’s New BER Airport and Back to the City‘).

Peace and Freedom at Level Zero

Willy Brandt, the late former Chancellor, is this airport’s name giver. A large portrait of him with a quote can be found in Terminal 1’s level zero, next to the main staircase and elevators. This is what it says in German and English: “If I were asked to say what, apart from peace, was most important to me, then my answer would be freedom.” The latter is being symbolized by Berlin, which is a few miles away from this airport, thirty and a half years after the Wall fell.

Terminal 1 of ‘Flughafen Berlin Brandenburg Willy Brandt’ has a capacity of 28 million passengers per year. In 2019, Tegel and Schönefeld Airports, the old ones which BER is about to replace, counted 35 million passengers. But, because of Corona, it will take years until that level will be reached again. First, BER will have to be converted from the most expensive parking lot in the Berlin Brandenburg region to an actual airport.

By the way: The flight to nowhere was not too shaky. No barf bags were needed. Everyone wore masks and nobody complained, except for me. Things will definitely be different today, on Friday, August 20th, 2020, because volunteers will have to simulate an evacuation of the train station underneath Terminal 1.