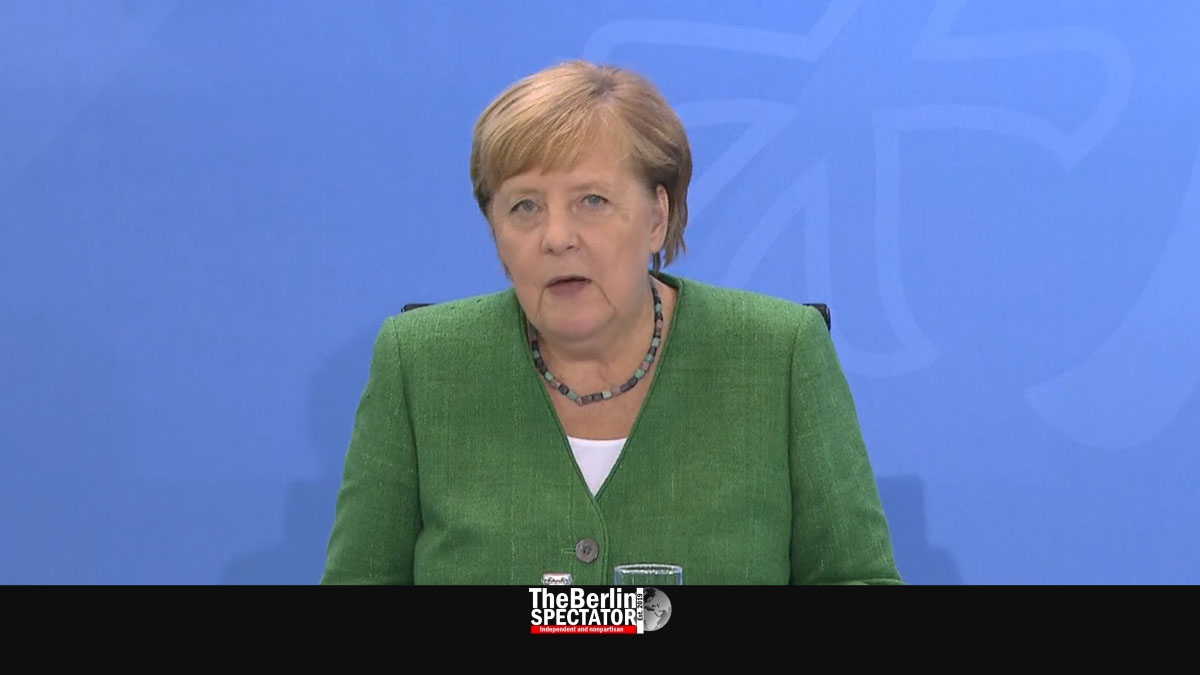 During a video conference on Thursday, Chancellor Angela Merkel and the First Ministers of Germany’s federal states found some common ground in regard to the Corona rules. Merkel had wanted more uniformity, a goal she reached in part.

Mrs. Merkel and the states agreed to consistent fines, for instance for public transport passengers who refrain from putting on required masks. For legal reasons, those fines will be called “raised transportation fee”. That way, controllers who check tickets on buses or trains can charge them as well, meaning the police will not be needed to be involved.

The Transport Ministers in the capital and Germany’s sixteen federal states were asked to discuss a similar approach in long distance trains and buses. One state, Saxony-Anhalt, refused to go along with fines of this kind, because its Corona infection numbers are comparatively low.

Angela Merkel said that, in spite of all regional differences, a mutual approach had advantages. She mentioned the rising number of Corona infections and said her government would take them very seriously. The existing worries had to do with the upcoming cold season, when people would follow their activities indoors, where the Coronavirus could spread more easily.

No Agreement on Private Parties

“In the pandemic, we want to keep our health system strong”, the Chancellor stated. Thus far, there has never been a point at which there were no beds in intensive care units at Germany’s hospitals. Angela Merkel wants to keep it this way.

What rules for festivities or parties in private homes are concerned, Merkel and the First Ministers did not reach an agreement on a uniform approach. She stated the states had very different ideas. Therefore it had not been possible to reach common ground on this question today.

Travelers who return to Germany from so-called high risk countries or regions with high Corona infection numbers will have to expect new rules. So far, they could avoid two-week quarantines completely by having themselves tested for Corona for free, for instance at the airport they arrived at.

Starting on October 1st, 2020, things will supposedly be different. Merkel and the First Ministers decided to make quarantines mandatory in these cases. On the fifth day, the earliest, those affected will be able to end their quarantine if they hand in a negative Corona test result. Hefty fines will be imposed on those who refrain from following the rule.

Once it is in place, this new rule will get rid of issues with the old one. For instance, it was relatively easy to avoid a quarantine so far. Therefore many Germans traveled to high risk regions. Secondly, Corona tests upon arrival at airports, train stations or Autobahn borders did not really give returning travelers reliable results, because COVID-19, the respiratory disease caused by Corona, can kick in a few days later, even in the case of persons whose test results are negative at first.

The new rule for people returning from high risk regions is obviously stricter than the old one. It is the first time in months that any Corona rule was tightened. Since May, many of them have been eased or dumped.

Support for Schools and Parents

There is yet another change: So far, there are free and voluntary Corona tests for travelers who enter Germany from countries that are not on the long high risk list. Those will not be available anymore after September 15th, 2020. Neither will there be reimbursements for lost income in the case of persons who need to go into quarantine after stays in high risk regions.

Because of the pandemic, which has been going on for seven months, the digitization at schools is supposed to be accelerated. Parents whose children cannot go to school or the kindergarten because of Corona will be supported financially.

What general rules for schools are concerned, the Conference of Culture Ministers is supposed to work on one. Especially the measures regarding masks at schools differ a lot, at this stage.

The ban for large events in Germany will be valid throughout this year, and it might be prolonged into 2021, depending on the developments regarding new Corona infections. Sports events might be treated differently. Proposals for related rules will be on the table in late October.