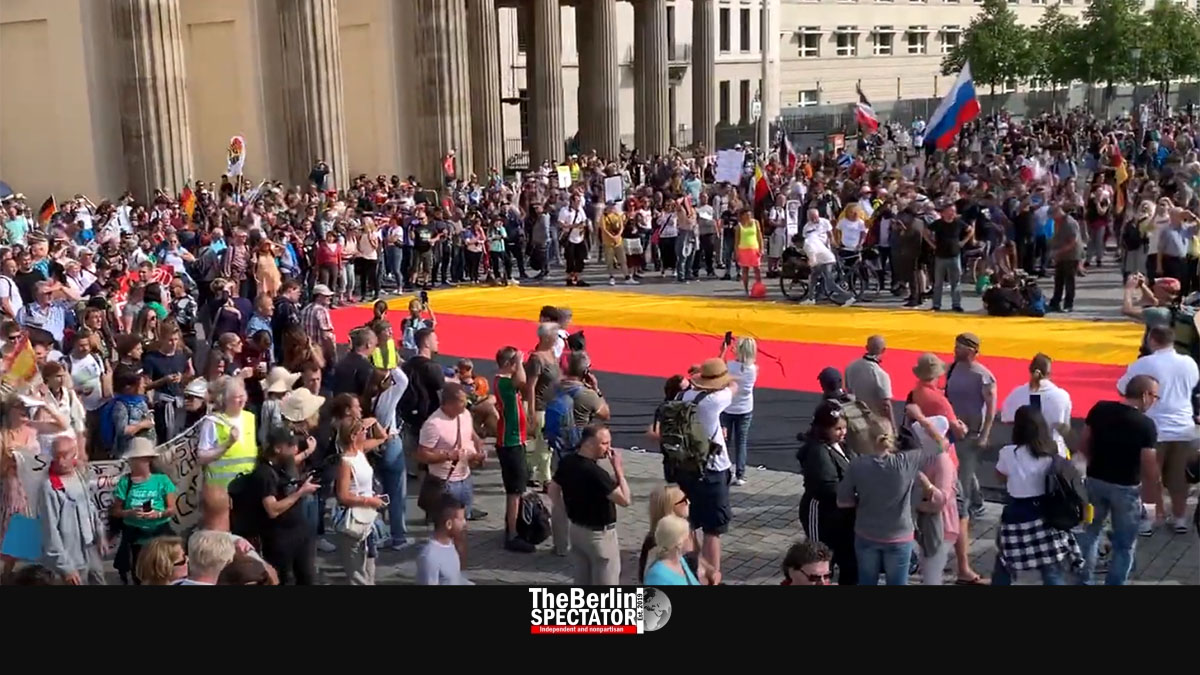 Police in Berlin arrested some 300 participants of several protests against the Corona rules on Saturday, At one point, officers had to prevent protesters from storming the Reichstag.

In Berlin, some 38,000 conspiracy theorists and Nazis staged several protests against the government’s anti-Corona measures on Saturday. As many as 300 persons were arrested for attacking the police and because of other violations. The city state of Berlin had banned the protests before two courts sacked the ban.

No Distance or Masks

While the rallies were registered and organized by the ‘Querdenken 711’ movement of Corona deniers, many Nazis and self-proclaimed ‘Citizens of the Reich’ participated. They do not recognize the Federal Republic of Germany or its authorities and are part of the extremist right-wing spectrum.

At around noon on Saturday, thousands of Corona deniers and Nazis took to the streets in Berlin’s ‘Mitte’ district and started joining two protest marches. Early on, police said there were 18,000 protesters. But since none of them kept their distance or wore masks, police did not let the marches proceed.

Banners the participants carried showed that the demonstrations were not entirely about demanding an end to Corona rules or denying the virus. They said “Merkel needs to go” and “We are the people”. Some extremists held Reich’s flags and obviously dreamed of overthrowing the government in order to go back to the darkest times in Germany’s recent history.

Other signs read “End the Corona dictatorship” or “Stop the Corona madness”. Some participants carried signs with photos of Chancellor Angela Merkel and some of her ministers in convict uniforms under the word “Guilty”.

Through loudspeakers mounted on vehicles, the police told the protesters to follow the Corona rules multiple times. When they did not react, police officially ended the rally. They started dispersing the crowd which had been growing constantly. A total of 38,000 protesters were counted.

On site, police announced its “measures” had not led to the adherence to the Corona rules. In spite of several announcements, the distance and mask rules had been ignored. Therefore, there was no other way to end the protest. The protesters were told that the organizers had been notified about the decision to end the event.

Escalation in the Evening

By 3:00 p.m., some protesters had blocked several streets by moving large objects onto them. They set a construction trailer on fire. Several persons were carried away by police officers. As many as three thousand policemen and policewomen were on duty. The Police Department used a helicopter to get a good overview of the situation in Berlin.

In the evening, things escalated further. Part of the protest, which was illegal by then since it had been officially ended by police, moved on to the large lawn in front of the Reichstag. Some participants started attacking the police by throwing bottles and other objects at them.

At some point, protesters managed to break through a barrier and enter the stairs to the Reichstag entrance. They were pushed back by police and therefore did not manage to enter the building. The situation in front of the Russian Embassy was similar. Here, police officers were attacked as well.

Attila Hildmann, a prominent conspiracy theorist and antisemite, was among the 300 people who were arrested in the course of the day. So were Nazis who carried signs or wore t-shirts with illegal symbols printed on them. For instance, swastikas are forbidden in Germany.

Features on The Berlin Spectator

Earlier this week, the Berlin Police had banned the protests registered by the ‘Querdenken 711’ movement of conspiracy theorists and Nazis. The authorities knew the protesters would not adhere to the Corona rules, also because it had happened before, during large demonstrations on August 1st. Then, two courts overturned the ban.

On Saturday night, once things had calmed down, Berlin’s Interior Senator Andreas Geisel said in an interview with the ARD TV and radio network, the events in Berlin had been expectable. Geisel defended the initial ban by saying the protesters had not wanted to criticize some Corona rules the government had implemented, but to spread doubts about the Liberal Democratic Basic Order. The latter is part of Germany’s constitution and defines the country’s democracy.

Disgraceful and Out of Place

Germany’s Foreign Minister Heiko Maas said everyone had the right to argue about Corona rules and express their opinions in protests. But nobody should follow right-wing extremists, endanger police officers or increase the infection risk for many people. Seeing Reich’s flags in front of the Reichstag was disgraceful.

Finance Minister Olaf Scholz, who is also Vice Chancellor and the Social-Democratic candidate for Chancellor, said the German constitution guaranteed freedom of speech and the right to demonstrate. But Nazi symbols and Reich’s flags were completely out of place in front of the Berlin Bundestag. The latter parliament is located in the Reichstag.

The discussion about yesterday’s events in Berlin and about the question how to deal with protests staged by Corona deniers and Nazis will likely continue on Sunday and into the new week.