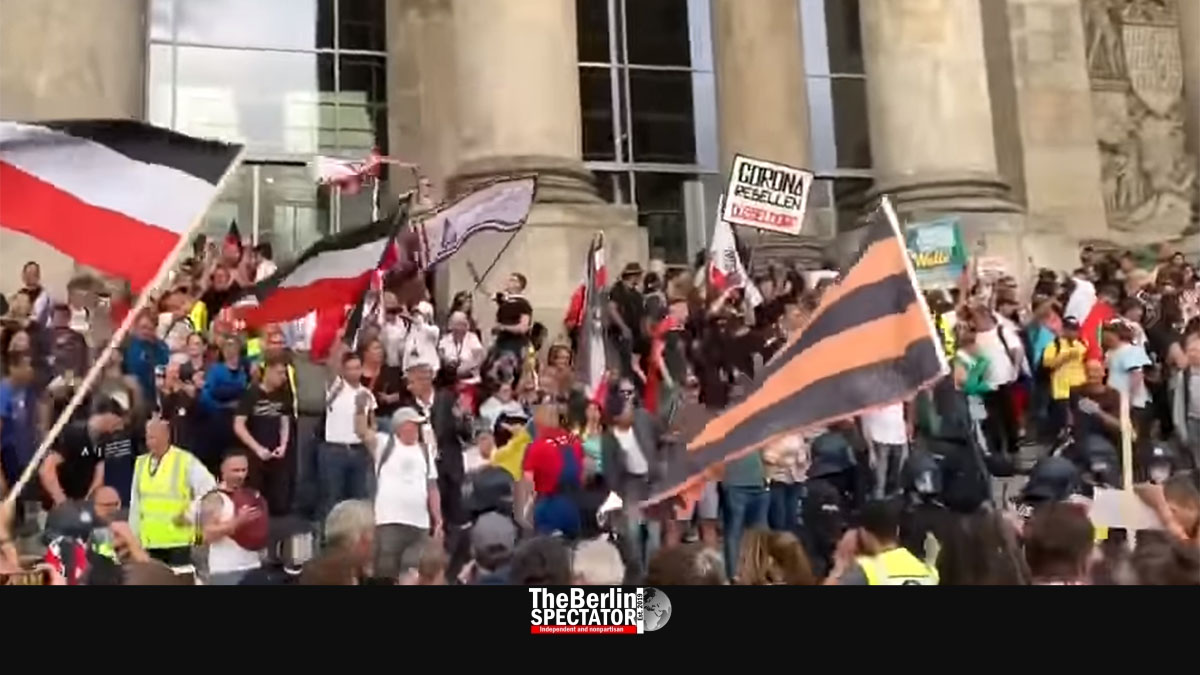 In Berlin, politicians reacted to the events on Saturday, when Corona deniers and extremists broke a barrier and headed towards the Reichstag. President Steinmeier called the incident an “intolerable attack”.

Germany’s President Steinmeier and other politicians in Berlin reacted to the incident on Saturday, in which protesters with Reich’s flags opened a barrier and ran towards the entrance of the Reichstag. They were pushed back by police before they had the chance to enter the building which accommodates the Berlin Bundestag. At first, only three policemen were present behind the barrier. They did what they could. Seconds later, they were enforced by more officers.

Self-proclaimed ‘citizens of the Reich’ and Nazis had been part of large protests staged by Corona deniers. None of the protest marches and rallies with a total of 38,000 people got very far because the police ended them. Hardly any of the participants had complied with requirements such as keeping the mandatory distance to others or wearing masks.

On Saturday afternoon, the situation escalated. Three hundred protesters, among them conspiracy theories and Nazis, were arrested for attacking the police and for carrying illegal symbols as tattoos or on clothing. For instance, swastikas are forbidden by law.

“Reich’s flags and right-wing extremist taunts in front of the German Bundestag are an intolerable attack on the heart of our democracy”, Steinmeier stated on Sunday. “We will never tolerate this”. He thanked the police for acting prudently in a difficult situation.

Those Reich’s flags that were seen a lot during the Corona deniers’ protests are black, white and red. They are being used by ‘citizens of the Reich’ and Nazis a lot. As opposed to swastikas or SS runes, the logo of Hitler’s ‘Schutzstaffel’, carrying ‘Reich’s flags’ is legal. They not only used in Nazi Germany in the 1930-s, but also by the North German Confederation in the 19th century and the German Reich before 1920.

Freedom of Assembly with Limits

The Berlin Bundestag’s President Wolfgang Schäuble said the “attack” needed to be looked into quickly and extensively. It was everyone’s duty to avoid being exploited by extremists. Interior Minister Horst Seehofer said the Reichstag building was “the symbolic center of our liberal democracy”, It was unbearable that extremists had abused it for their purposes.

According to Seehofer, a diversity of opinions is the trademark of a healthy society. But the freedom of assembly had limits where the state’s rules were abused, the Minister said. His colleague at the Foreign Ministry, Heiko Maas, said Reich’s flags in front of the Reichstag were a disgraceful sight.

Lars Klingbeil, the Secretary General of the Social Democratic Party (SPD), the junior partner of the conservative Christian-Democratic Union (CDU) in Chancellor Angela Merkel’s government coalition, said the Bundestag’s Council of Elders now needed to clarify what the security concept had looked like.

Last week, the city state of Berlin had banned the protests that had been registered by Corona deniers, but two courts sacked the ban. Three thousand police officers were on duty in Berlin on Saturday. One thing is certain: This weekend’s scenes in Berlin, and especially those on the stairs to the Reichstag, will have an epilogue.

On Sunday, two smaller protests staged by Corona deniers took place at Berlin’s Brandenburg Gate and Victory Column. They had about 2,000 participants each.