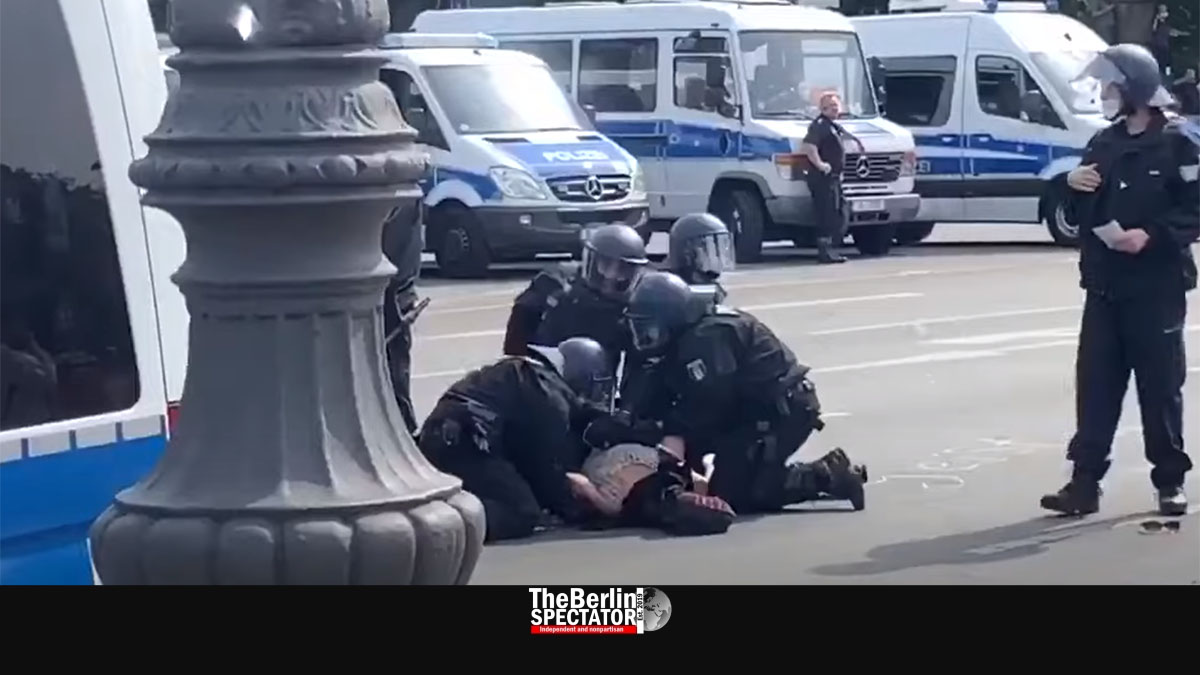 The Berlin Police allegedly used intemperate force against two women, including a pregnant one, during the protests staged by Corona deniers on Saturday. Some of the accusations spread on the internet are conspiracy theories, others could be accurate.

“No, we have not killed any woman.” The Berlin Police Department does not publish statements of this kind every day. “Nor do we have indications according to which a pregnant woman lost her baby due to a police operation.” A killing and a lost baby. These are the accusations the Police Department in the German capital is being confronted with on the Internet after it ended protests staged by conspiracy theorists and Nazis last weekend.

Officer Suspected of Assault on Duty

Of course, these allegations are conspiracy theories designed to damage the police’s reputation. At the same time there were incidents the Police Department is looking into now. One of them can be seen in video clips spread on social media. They show several police officers who are holding a woman to the ground while one of them punches her on her back several times.

Berlin’s State Office of Criminal Investigations started investigating the case. The officer who punched the 60-year-old woman is being suspected of assault on duty. But the case is not as simple as those who are accusing the police of crimes want it to be.

Indeed, the video clip of the incident is hard to digest, especially the part that shows those punches which might constitute battery. On top of it all, the woman loudly screams during the part of the incident filmed and posted online by several protesters. What those clips do not show is what happened before the woman was carried away by police officers.

The events took place at Berlin’s Victory Column on Saturday afternoon. Because hardly any protesters adhered to the distance rule designed to curb the spread of the Coronavirus, police officially ended the rally and ordered the participants to leave the location several times. The woman who was later held to the ground by officers was among those who did not follow those orders.

The police say the woman had huddled on the street, trying to avoid being carried away by officers. Then she supposedly kicked an officer’s belly and tried to bite another policeman. As she continued resisting the police, one of the officers punched her, to make her move her arms behind her back.

Of course, even protesters who team up with Nazis in order to criticize the government for taking measures against a virus they say does not exist have rights. But so do the police. At the same time, officers may not use excessive force, even in a situation in which they are being kicked and threatened otherwise.

The Police Department says the woman had been injured slightly during the incident. She had been offered medical help afterwards, which she had declined before she had walked away later.

Berlin’s Interior Senator Andreas Geisel commented on the video by saying the incident should be judged carefully. The video had commenced at the moment the officers had held the woman to the ground, Geisel stated. The clip did not include what had happened before, including her kicking an officer.

According to the police, there were situations on Saturday in which officers had to enforce orders by pulling, pushing or punching protesters or by using pepper spray. “No officer likes to use force”, a statement read. “It is always the last resort, when orders are not being followed, in situations in which they urgently have to be adhered to.”

Another video clip posted shows the arrest of a pregnant woman at the same location. She was part of a group of protesters who tried to break through a police barrier and supposedly hit an officer and spat at police. The Police Department said officers had brought her to the ground and arrested her.

According to the police, paramedics checked the pregnant woman and came to the conclusion that she was not injured. She did not want to be taken to the hospital. Legal procedures against here were initiated, for resisting police officers and for attacking them. The Police Department says there were no indications according to which the woman lost her baby due to the police operation, as it says in posts on social media.

It is not the first time arrested protesters accuse the police of excessive force. The same applies to posting videos of parts of incidents that do not show what happened before. Of course, there are cases of wrongdoing by individual officers. Whether this was the case on Saturday is what the State Office of Criminal Investigations is trying to establish.