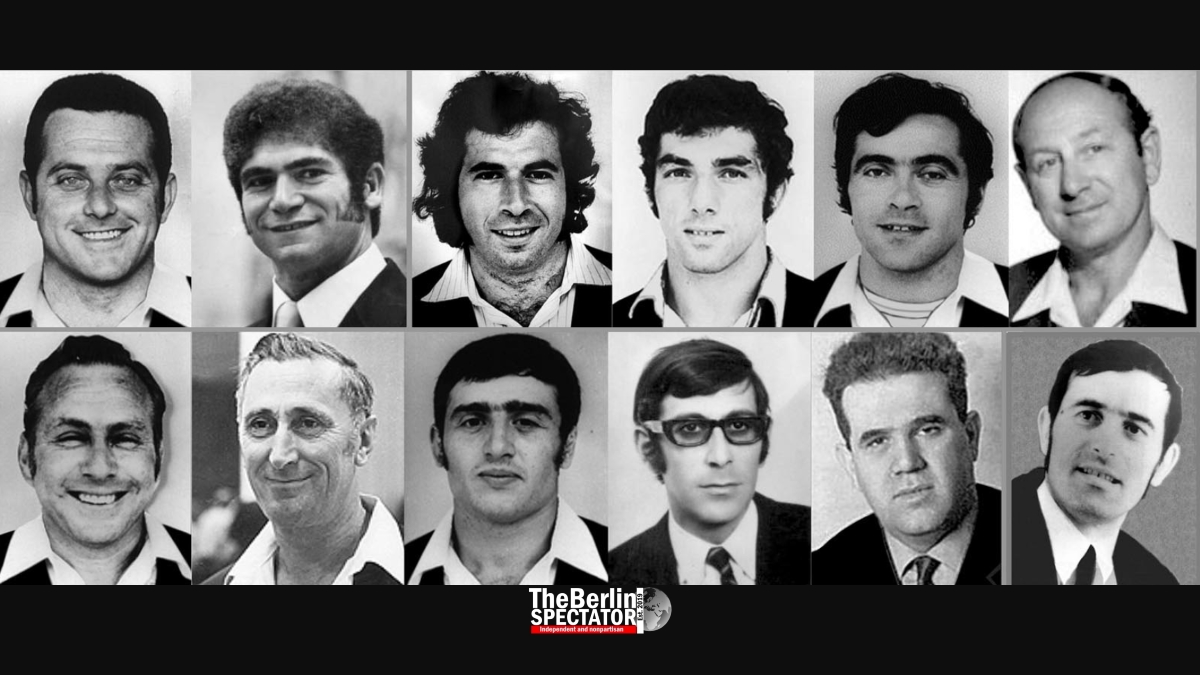 Forty-eight years ago in Munich, Palestinian terrorists murdered almost the entire Israeli team at the Olympic Games. West Germany aided the culprits by making serious mistakes. One of those has not been corrected until today.

On September 5th, 1972, in the early morning hours, David Berger, a 28-year-old weight lifter, was gaining strength for the next day, by sleeping in the accommodation for the Israeli participants of the Olympic Games. He and his colleagues were expecting days of competition. They were not the only ones in Munich who were hoping for medals.

The wrestler Eliezer Halfin, a 24-year-old pro, was part of the team. So were Zeev Friedman, another weightlifter, aged 28, and his colleague Mark Slavin, the youngest team member. He was 18. Fencing coach André Spitzer, 27 years old, was sleeping as well. So were the older members of the Israeli team.

When murderers of the Palestinian terror organization Black September broke into the Israeli accommodation at the Olympic village at 4:35 a.m., two Israelis tried to prevent the attack. With a lot of courage, weightlifter Yossef Romano, who was 31, and Moshe Weinberg, a wrestling coach aged 33, fought the heavily armed terrorists and were the first to be murdered.

It took the German authorities two hours to establish what exactly was going on. Weinberg and Romano were already dead when officers finally cordoned off the area. At around 9:00 a.m., Black September presented its list of demands. They wanted the release of far more than 200 Palestinian terrorists from Israeli jails. And they told Germany to release Ulrike Meinhof and Andreas Baader, two prominent members of the German terrorist organization Red Army Faction (RAF).

The terrorists issued an ultimatum until noon that was prolonged twice. Germany’s Interior Minister Hans-Dietrich Genscher offered to be exchanged for the Israeli athletes, but Black September rejected anything of the kind. Later on, the ultimatum was extended into the evening.

Two failures on the part of the German police helped the murderers. On television, the hostage takers watched police as they were preparing to storm the building, in an attempt to free the hostages. As a result, the operation which could have saved lives was called off. The mistake was not to shut down the electricity in this part of the Olympic village and not to think of the information flow or its implications at all.

At some point in the evening, the German authorities pretended to agree to demands. They let the terrorists board two helicopters with their Israeli hostages. The plan was to fly to the airport in the town of Fürstenfeldbruck, where they were supposed to board a jet to Cairo.

At the airport, the next police mistake led to the death of all hostages. Sharpshooters opened fire on two of the terrorists who were checking the aircraft. They were ordered to do so. What followed was a shootout between Black September’s murderers and the police.

At around midnight, armored police vehicles arrived. Once the terrorists saw them, they killed all hostages and blew up one of the helicopters with a grenade. In spite of the massacre, the authorities said all hostages had been freed. This announcement had to be corrected later.

German Money for PA and PLO

Because the police seemed to be clueless and obviously had no plans for operations of this kind, an elite force was founded months later. The ‘GSG-9’ team freed hostages from a Lufthansa jet hijacked by Palestinian terrorists in 1977.

Failure on the part of the Bonn government made the Munich Massacre possible in the first place. Just five months before, Black September had hijacked another Lufthansa jet full of passengers. The Federal Republic of Germany paid them millions. Without the ransom money, the Palestinian murderers would likely not have been able to come to Munich, let alone plan the Olympic Games attack.

Bonn learned from this mistake in the sense that the government never directly paid hijackers again. On the other hand, the Germans never stopped funding the Palestinian Authority, which supported terror back then and still does today, for instance by paying salaries to the families of terrorists.

There was yet another worrisome aspect. German neo-Nazis supported the Palestinians by providing the infrastructure they needed in Europe. A prominent Nazi by the name of Udo Albrecht set up contacts between the PLO and some of his friends in the Nazi community. In July of 1972, two months before the Munich Massacre, the Federal Criminal Police Office, which is the German FBI equivalent, knew about those contacts.

On top of all of these failures and mistakes, the Olympic Committee did not take the right decisions. In spite of the hostage situation on September 5th, 1972, they let the Games continue. In the afternoon, they were interrupted for a while only. Also it took the IOC decades to agree to an appropriate commemoration event for the Munich Massacre victims at the Olympic Games.

There has never been a trial against the masterminds. Also, the Federal Republic of Germany has not stopped paying terrorists or hosting them. Mahmoud Abbas, today’s President of the Palestinian Authority, has close ties to Berlin and other European capitals. Not only does he openly admit his organization pays terrorists, whom he calls “martyrs”. He was also accused of having been part of the effort to finance the Munich Massacre in 1972. This is something he has denied.

Forty-eight years after Munich, the memory of David Berger, Eliezer Halfin, Zeev Friedman, Mark Slavin, André Spitzer, Yaakov Springer, Amitzur Shapira, Kehat Schorr, Yossef Gutfreud, Yossef Romano and Moshe Weinberg lives on. They were murdered because they were Jews. The German police officer Anton Fliegerbauer, who was killed on duty, will not be forgotten either.

Today, virtually all Jewish institutions in Germany, including synagogues and schools, are being guarded by police 24/7 because of the rising antisemitism and the danger posed by Islamist terrorists. Munich is not supposed to happen again.