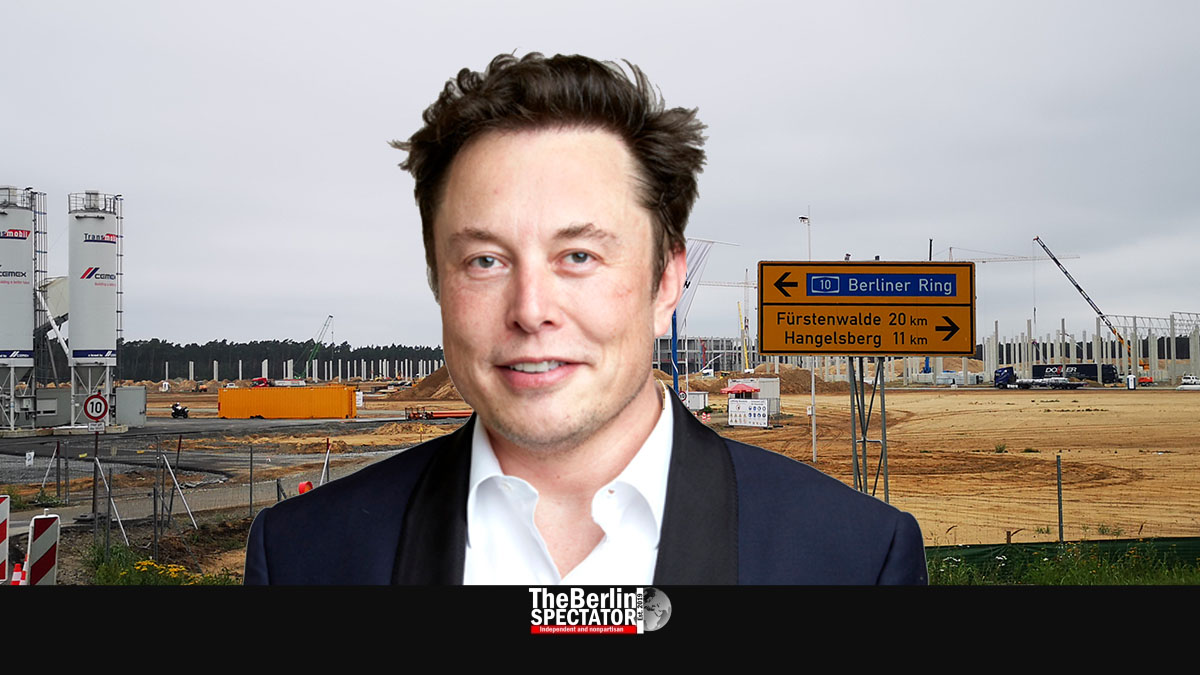 A superstar is touring Germany, namely none other than Elon Musk. His visit is about a lot more than just a construction site in Brandenburg.

The second his Gulfstream Jet landed in Germany, Elon Musk was on a rather tight schedule. Visiting the construction site of Tesla’s ‘Gigafactory’ in Freienbrink, an industrial zone in Brandenburg province, is not the main purpose of his ongoing trip. One of the most important appointments Musk had was scheduled in Tübingen, a picturesque university town in Germany’s south-western part.

Here, Musk’s interest was focused on a machine that can produce a Corona vaccination faster and in a more flexible way than anything comparable on the market. In cooperation with Curevac, the guest from California intends to expedite the development of a vaccine against the virus that has had a lock on the world for seven month now.

Exactly 378 kilometers (235 miles) north-weest from Tübingen, a distance a Tesla Model S can easily do with one battery load, in Prüm, the Tesla subsidiary ‘Grohmann Produktionssysteme’ has its headquarters. Not only does this company make production systems for automotive engineering, but also for vaccine manufacturing. This is how Grohmann and Curevac connect. Corona is controlling the world right now. Curevac and Musk intend to reverse this situation.

In the past few decades, hardly any entrepreneur has been celebrated like Elon Musk, maybe with the exception of the late Steve Jobs, Bill Gates and Richard Branson. Musk did not care when the big auto industry players laughed at him while he converted Lotus Elise roadsters into electric vehicles. Now they are trailing behind, meaning they stopped laughing.

When Musk’s company SpaceX brought supplies to the International Space Station (ISS), and especially when they flew the astronauts Robert Behnken and Douglas Hurley to the same location on their Crew Dragon spacecraft, which was propelled by a Falcon 9 rocket, the world was stunned. Here is someone who is actually making America great again.

The Engineer and his Bio Reactor

Last weekend, Elon Musk announced on Twitter, Tesla was in the process of manufacturing ‘micro factories’ for Curevac. Musk, an engineer himself, wanted to see his German company’s production machine for vaccinations, a so-called ‘RNA Bio Reactor’, first hand. In 2017, Tesla purchased Grohmann.

On Wednesday, dozens of ‘Gigafactory’ opponents waited for Musk in Freienbrink. They held signs that accused Tesla of hurting the environment on site and seemed to be the only individuals who do not like the entrepreneur from California. His fans also waited at the industrial zone located just south of Berlin, but Musk did not show up.

Guest at CDU Board Convention

He was busy talking to Germany’s Commerce Secretary Peter Altmaier in Berlin. With a Tesla Model X, Musk was brought to a location at ‘Westhafen’ in Berlin’s Moabit district, where he also had conversations with Health Minister Jens Spahn, Education Minister Anja Karliczek, the CDU’s floor leader at the Bundestag, Ralph Brinkhaus, and others. The one he reportedly did not talk to is Chancellor Angela Merkel, even though she was at the same location, for her conservative party’s board convention.

There are several subjects Musk, the Ministers and other conversation partners likely discussed. Those include big investments, ‘Gigafactories’, spaceflight, batteries as well as the present and future of mobility and the state of the auto industry. Before being hosted by the CDU, Musk met Brandenburg’s Social-Democratic First Minister Dietmar Woidke and the federal state’s Commerce Minister Jörg Steinbach.

Today, Elon Musk will probably visit the construction site in Freienbrink after all. Since Tesla does not yet have all permissions it needs, it is building on its own risk. This means, should the construction permit be denied, the company would have to remove everything it has been constructing so far. But it will not happen. Musk wants the first vehicles, the Berlin Model Y, to roll out of the factory’s gates in a year from now.