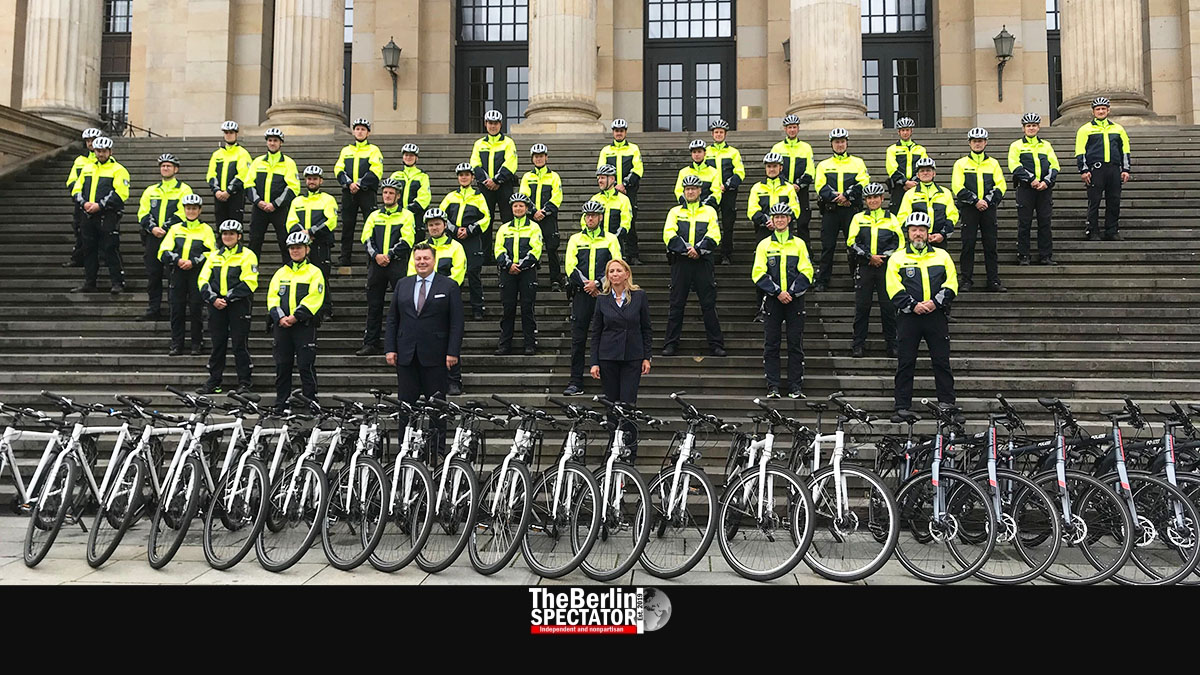 They ride in rain, on snow and ice, in storms and temperatures of up to 100 degrees Fahrenheit: Cops on bicycles were introduced in Berlin six years ago. What was an experiment at first is now a growing endeavor.

Berlin’s Police Department had an idea in 2014. They thought that if cops could be in helicopters and cars, in water cannons on wheels, on boats, motorbikes and horses, they might just as well add bicycles. Sure, bikes do not have A/Cs, but neither do horses or motorbikes.

Putting policemen and policewomen on bikes is the right thing to do, also because Berlin is a bicycle city. More and more Berliners transport their kids on bikes, they use them to go to work, even to move from one apartment to the next, for deliveries and basically anything. Half a million bike rides per year were recently counted.

Not everything cyclists do is good and legal. Some do not signal their turns. Others talk on their cell phones or write chat messages on their bikes. Riding one’s bicycle free-handed is illegal, but people do it. The same applies to riding on the sidewalk or under the influence of all kinds of substances and fluids.

What might sound funny actually isn’t, because that way cyclists put themselves and others in harm’s way. Someone needs to be there to stop cyclists and fine them for offenses. That is what those cops on bikes do. They also give advice and talk to people, which is an important function as well.

There is more: The Berlin Police Department’s bicycle team also deals with motorists who park on bike lanes, who cut off cyclists, who do not watch out for them when they make right turns, or who do not leave enough space when they race by.

In a city like Berlin, 20 cops on bikes will not get too far. That is why the size of the team was more than doubled today, to 43. It gets better: By the end of 2020, there will supposedly be as many as 100 bicycle cops. So far, those 20 police officers, on two wheels each, were mainly deployed in what is known as ‘City East’. Now they will cover parts of ‘Neukölln’, a rather big Berlin district, as well.

Some bike cops have regular bicycles, others use electric ones, meaning the future has arrived at the Police Department as well. All of them wear yellow vests absolutely nobody will be able to overlook, including those who want to. It is the kind of yellow that almost hurts in the eyes.

“What started as an innovative idea six years ago, is now an indispensable authority on the streets of Berlin”, Berlin’s Police Chief Barbara Slowik said today. Interior Senator Andreas Geisel stated, the “colleagues” on bikes represented “a modern police force”. He announced another increase. By 2023, there will be 160 cops on bicycles. In the year 3000, there will probably be a million of them.