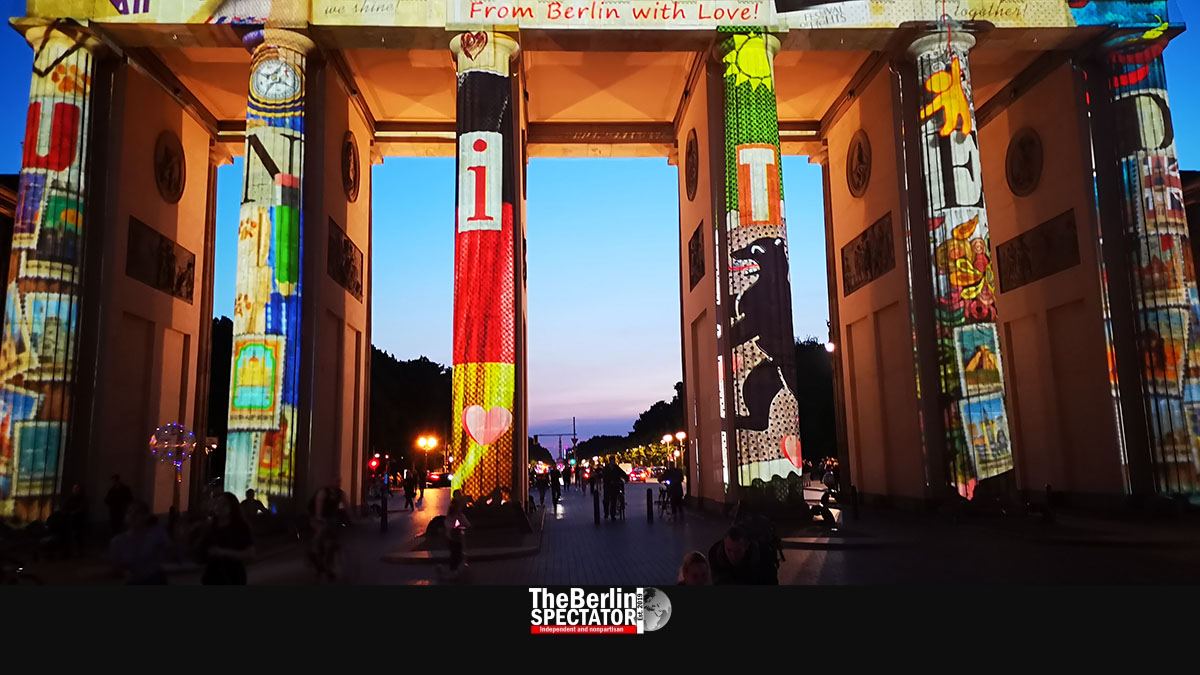 Countless Berliners and visitors cycled and walked through the German capital’s city center on Saturday night. The Festival of Lights gave them some beautiful sights and a portion of culture during a difficult year.

In Berlin, several important landmarks changed their appearance once it was dark enough, after 8:00 p.m.. They were illuminated by collages of light. For instance, Brandenburg Gate, a symbol for both divided and united Germany, was lit in many colors.

‘From Berlin with Love’

The word ‘united’ was projected on its six main pillars. “From Berlin with Love” it said at the top. Brandenburg Gate was even prettier than it usually is, 31 years after the Berlin Wall fell, and 30 years after Germany’s reunification took place.

During the 16th Festival of Lights in 2020, Berlin was affected by the Corona pandemic. In the city, deniers and haters have recently staged protests on a regular basis, and they might even be part of the Berlin Bundestag, but the city is united and free, along with all of Germany and most of Europe. That is why this year’s motto for the festival is ‘Together We Shine’.

The U.S. Embassy behind the Gate was illuminated as well. Here, it was not so much about art, but the message came across: “The United States congratulates the German people on 30 years of unity, peace and freedom”, it said on the building. All buildings at ‘Bebelplatz’, the square next to the Berlin State Opera, were lit in colorful collages as well. They looked very impressive.

From ‘Lustgarten’ park, thousands of spectators stared at Berlin Cathedral. Yes, that landmark is always beautiful, but it looked very different last night. The temple was lit in yellow, green and blue. Had the crowds not known they were in Berlin, they would likely have thought they are in Rio de Janeiro.

Berlin’s TV tower was supposed to be lit as well, but no light projections were seen on Saturday evening at between 8:00 and 9:00 p.m.. Located a few steps down the street, Red City Hall was lit though. It varied its colors. First it turned blue, then it conveyed a message as well: “Wir sind ein Berlin”, which obviously means “We are one Berlin”.

Berlin’s Governing Mayor Michael Müller himself posted a selfie taken in front of Red City Hall with that same message.

A few steps away, a pretty bad traffic jam developed on ‘Spandauer Strasse’ on Saturday night, because some Berliners had the genius idea to follow the festival lights by car. But since several streets were closed, in order to give room to all those pedestrians and cyclists, motorists got stuck.

Most other important cultural events in Berlin, including the Carnival of Cultures and virtually all large concerts since March, were scrapped because of the Corona pandemic. To thousands of residents, it felt good to be able to take part in the Festival of Lights which will continue until September 20th, 2020.