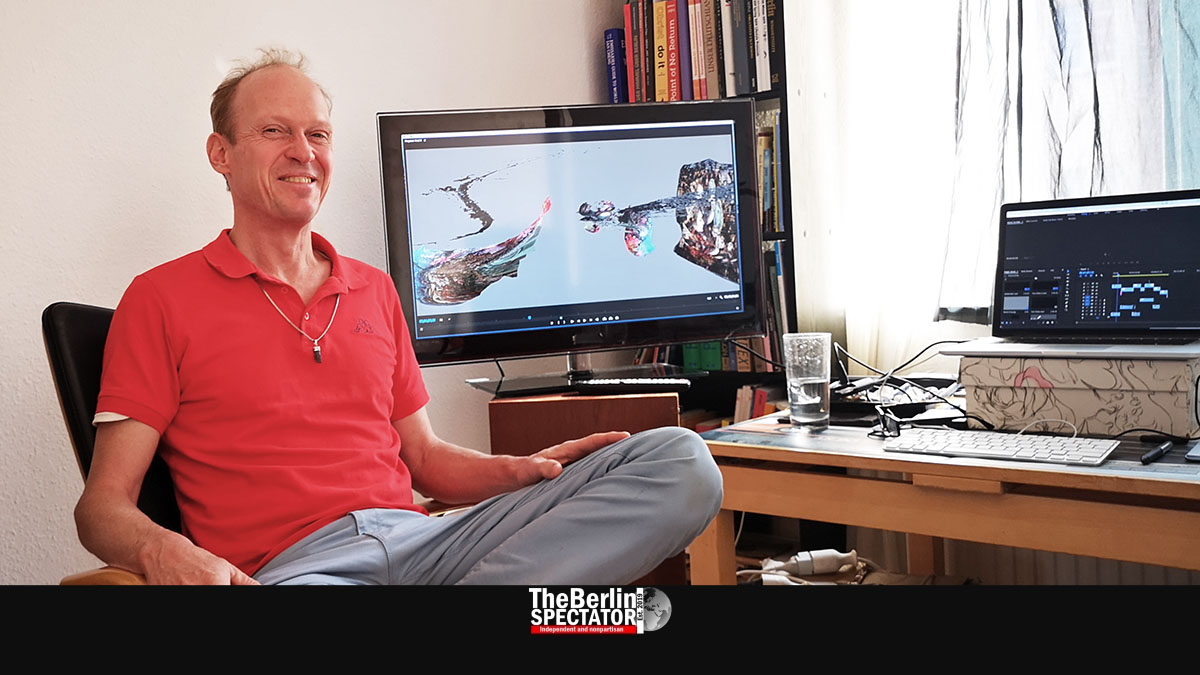 Sean Smuda, a multi-talented artist from Minneapolis, lost everything in a fire. Then he ended up in Berlin, where he continues to create art of several kinds.

“Fire completely destroys the Roberts Shoes Building, displacing dozens of artists”, a headline on the Minneapolis-based City Pages website read on May 28th, 2018. One of those artists was Sean Smuda, who lost almost everything he had, including most of his art, his instruments, his personal things. The only items he could save were pieces that were backed up by printing services he used in Minneapolis.

The fire made him open a new chapter. Two months after the incident, he moved to Berlin. Two years after the fire, George Floyd, a 46-year-old African American man, was killed by a white cop just a few blocks away from the former Roberts Shoes Building. As a result, Black Lives Matter, a movement against racism and police violence, spread all over the world, including to Berlin, where several protests took place.

“It felt really good to see that. I ran a gallery eight blocks from where George Floyd was murdered, and a friend of mine was murdered near there as well”, Sean Smuda tells The Berlin Spectator. “It was super emotional and made me realize all these threads of a social fabric that were becoming completely undone from that moment.”

There is hardly any art form Smuda does not touch. As a photographer, he also shoots events in a journalistic way, including the recent Black Lives Matter rallies in Berlin. “I saw someone in the crowd. They had a sign saying they were from Minneapolis.” He did not talk to them since he could not reach them that quickly from the old phone box he had climbed on to take pictures. But this was the moment when Minneapolis, his old home, came to the city he made his new home.

Ambition is Counterproductive in Berlin

Berlin, the city of cities, is supposed to be artsy-fartsy, a paradise for artists like Sean Smuda, an American with Polish ancestors who does it all, including performances, experimental noise art on various instruments, fascinating collages, dancing and even sculpturing. But was Berlin what he expected it to be? “Ja, nein”, he says.

“I thought there would be much more momentum”, Smuda states. “Also I thought there would be more opportunity for someone like me, who has worked with a major museum. But, of course, you have to meet people first. You have to get to know them. Being ambitious, selling yourself in Berlin, is a counterproductive thing. The idea now is that I will just ask people what they think about the work, without any sales pitch at all.”

Then, some one and a half years after Sean Smuda arrived in Berlin, Corona reached the city. “It was a strange moment, because I was really taking a break after the fire in which I lost absolutely everything that I ever had. I had also been subletting for a while and needed to find a place. So I found this apartment. That is when Corona hit.”

Inspiration and Creativity in Corona Times

“So, I found this place, went out of town, came back. The day I was coming back, a flight of mine was cancelled. Everything was going into lockdown. So, I literally had my first real stability, the apartment, and then the pandemic, which was the complete instability.”

In this situation, Smuda got down to work. He started a new project, opened a new Facebook group for artists like him, who want to share their work. “I made a performance video every day, for the first forty days. It became a job after a while. I was very inspired by this slowdown. Society seemed to be getting closer to nature.” The situation had also led to more meaningful interactions with the people he had met during the first phase of the Corona lockdown, Sean Smuda says.

“People became a little more reflective and a little more sharing in some ways”, he explains. “The social fabric, which was to imagine what would come, what was important and what needed to be restructured about things, became super inspirational. I mean I could not stop making up songs and dance moves, interacting with the environment, putting it all together and posting a video a day.”

That intense creativity phase, triggered by Corona and its ramifications, continues. “I’m taking the older work I did in Minneapolis, the prints, and I am creating digitally animated sculptures out of them. And I am adding music. As you can see, I have a mini studio with keyboards and guitars. So, I am using them in editing programs to create soundtracks for those animations.” That way, Sean Smuda is combining several art forms.

Street performance is another area of Sean Smuda’s art. “Performance activates the public space”, the new Berliner from Minneapolis explains. “By and large people ignore it here, or they see something they like and watch it for a while. Sometimes they even applaud. Some performances include singing.”

The reactions Smuda got from spectators were different in the United States. “In America, it is more about amusement. People become more curious. But the nature of the performances I did in America was more pointed, scripted and sited. Over here, what I have done so far has been completely improvised. I use the performances for learning about the environment and the people.”

The Archaeology of Data

Yet another area of art, sculpting, has taken a back seat in Sean Smuda’s work, at least for now. The animations he is doing are “incredibly time consuming. It’s a couple of weeks to make two minutes worth of work. It is like a trance. You know you are getting to a higher vision.” The American artist says he wants to create art that relates to the analog prints it came from.

This kind of art, those animations, “comment on the future geography or archaeology of data itself”, according to Smuda. “These files are going to break down. I am breaking them down already, and then reassembling them back into the reality of something analog. It is almost something like reverse engineering, but through time and back.”

In Berlin, the ‘Victoria Bar’ at ‘Postdamer Strasse’ commissioned a print by Sean Smuda. “It is from a series they had seen. They wanted a particular piece, and I decided I would remake it for them. I would encourage people to go there to see it”, he says. It will be there until November.

Cultural reviews for publications in the United States are yet another area Sean Smuda is busy with.

Mornings with Swans and Ducks

Sean Smuda lives in Berlin’s Weissensee area. On his bicycle, he has explored the city a lot. In summer, he jumps into the ‘Weisser See’, a lake in a beautiful park which he shares with swans, ducks and a handful of other courageous Berliners in the early morning hours. Smuda, the multi-talented artist from Minneapolis, is still in the process of making Berlin his home.