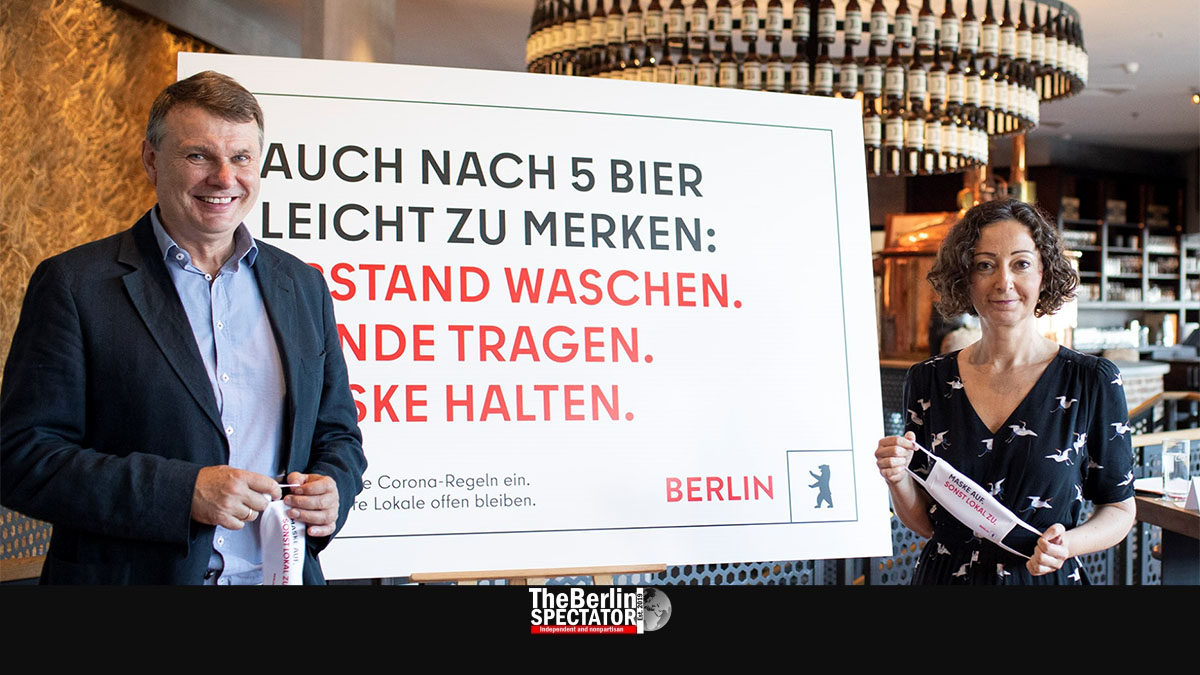 An ad campaign Berlin is about to launch this week is supposed to make people adhere to the Corona rules. It uses humor. Some of the slogans used even work in English.

Berlin’s Senate Administration of Economics and the state-owned company ‘visitBerlin’ just introduced an advertising campaign that is supposed to make residents follow the Corona rules. The intention was to make it a humorous one.

“The wagging finger does not go down too well in Berlin”, the CEO of ‘visitBerlin’, Burkhard Kieker, said on Monday. “That is why we want to appeal to Berliners by using their own, dry humor.” Some of the slogans are rather funny indeed.

One of them says “Finally: The waitress wants your phone number”. The way the slogan was written in German, it works with “waiter” too. It refers to the contact data restaurants and cafés are supposed to collect from all guests. That way they can be contacted and sent into quarantine in case of a local Corona outbreak.

“Liberté, Egalité, Charité? Better keep your distance”, another slogan reads. It is a modified version of the national motto of France and Haiti. Charité is Berlin’s most famous hospital chain. Many Corona patients have been treated there since the campaign hit the German capital some seven months ago.

A third slogan that works in English as well is “Easy to memorize, even after five beers: Wash your distance. Wear your hands. Keep your mask.” This slogan might be funny, but it also shows the problem with drinking during the Corona pandemic. Tipsy or drunk people usually do not care about any rules.

This is exactly what makes partying so dangerous right now, and the reality is not funny at all. In a way, that slogan may not really hit the nail on its head, because no rules are easy to memorize to intoxicated individuals, no matter whether they are in Germany, where the Corona situation seems to be under control right now, or in countries like France or Spain, where the number of new Corona infections is exploding.

Berlin’s Economy Senator Ramona Pop said, Berlin’s restaurant proprietors made sure residents and visitors felt welcomed and safe, even in the times of this crisis, that they could enjoy culinary diversity, and that Berlin remained livable. The successes Berlin had had handling the crisis should not be put at risk, she stated.

Campaign to Start this Week

“Together, we will get through the fall and winter safely”, Senator Pop said. “With the new campaign, which addresses Berliners, visitors and restaurant owners alike, we want to call attention to the distance and hygiene rules.”

Later this week, the campaign will be started on electronic advertising panels at ‘Warschauer Strasse’, ‘Rosenthalter Platz’, ‘Hackescher Markt’, ‘Alexanderplatz’ and other locations in Berlin.

Berlin’s Police Department launched a new campaign as well. It is entitled “110 percent Berlin” and was developed to show residents what values the police stand for and has several motives. The police campaign is supposed to make young Berliners consider a career with the force. “110” refers to Germany’s nationwide phone number for the police.