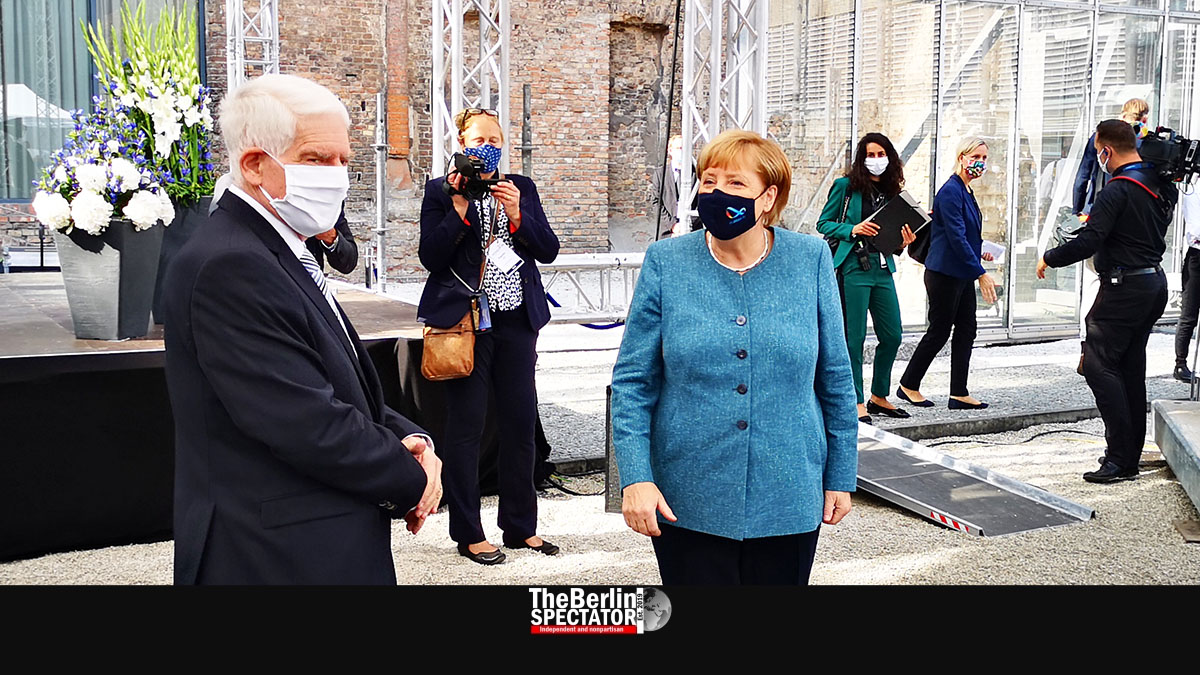 Angela Merkel joined the 70th anniversary festivities of the Central Council of Jews in Germany today. The Chancellor said she was worried about — and ashamed of — the rising antisemitism.

Exactly Eighty-five years after Nazi Germany enacted the Nuremberg Laws which revoked citizenship from German Jews and imposed restrictions on them, and 75 and a half years after the liberation of Auschwitz, the Central Council of Jews in Germany celebrated its 70th anniversary at the New Synagogue in Berlin today.

Jews Do Not Feel Safe

Angela Merkel, several of her ministers, the Berlin Bundestag’s President Wolfgang Schäuble, Berlin’s Governing Mayor Michael Müller and many other politicians took part, along with the Council’s President Josef Schuster, his predecessor Charlotte Knobloch, the organization’s staff and other personalities from Germany’s rather small Jewish community. The number of guests was a lot smaller than originally planned, because of Corona.

In a speech at the event, Chancellor Merkel called for a resolute fight against antisemitism in Germany. It was a disgrace how Jew hatred and racism were expressed “in this country today.” She said this was a development which ashamed her. “I am very worried about the fact that many Jews do not feel safe or respected” in Germany.

“It is true: Racism and antisemitism never vanished. But, for some time now, they have been more visible and disinhibited”, Mrs. Merkel told the guests of the Central Council’s event. Jewish citizens were often targeted by insults, threats and conspiracy theories. Hatred and incitement was spreading on social media. “We can never keep quiet on this”, she stated. “Misanthropy applied to groups” needed to be fought.

When the Central Council of Jews in Germany had been founded in 1950, Holocaust survivors had not seen their future in Germany, Angela Merkel said. Celebrating the 70th anniversary of the Council was therefore not self-evident. The Chancellor quoted Josef Schuster who had used the expression “credit of trust” when he explained why many Jews stayed in Germany in spite of the Holocaust. This was what German Jews had given Germany back then.

Schuster described the situation during the foundation of the Council of Jews in Frankfurt in the year 1950 by saying this: “In a city that was destroyed by the war, Jews whose lives and families were destroyed by the war decided to found an umbrella organization for Jews in the country of the perpetrators.”

Back then, the organization’s responsibility had been to help Jews to get out of Germany and to represent their interests while they had still been there. The “Jewish generation of pioneers” had not expected the Council to exist as long as it had up to now, Schuster said.

Schuster mentioned attacks against Jews of the past decades, including the one against the Synagogue of Halle almost a year ago, during which two people were murdered by a Nazi. The overall number of crimes with an antisemitic background was not encouraging, he stated.

He also mentioned the conspiracy theorists who stage protests against the German government’s anti-Corona measures on a regular basis and the fact that some of them wear yellow stars of the kind Jews were forced to wear in Nazi Germany. “I know people who had to wear the star back then”, Schuster said. “They are people who survived by a narrow margin. By the way: They do tolerate the anti-Corona measures. I wish they would not have to witness the exploitation of their fate.”

The Central Council of Jews in Germany represents 105 Jewish congregations with a total of 100,000 members.