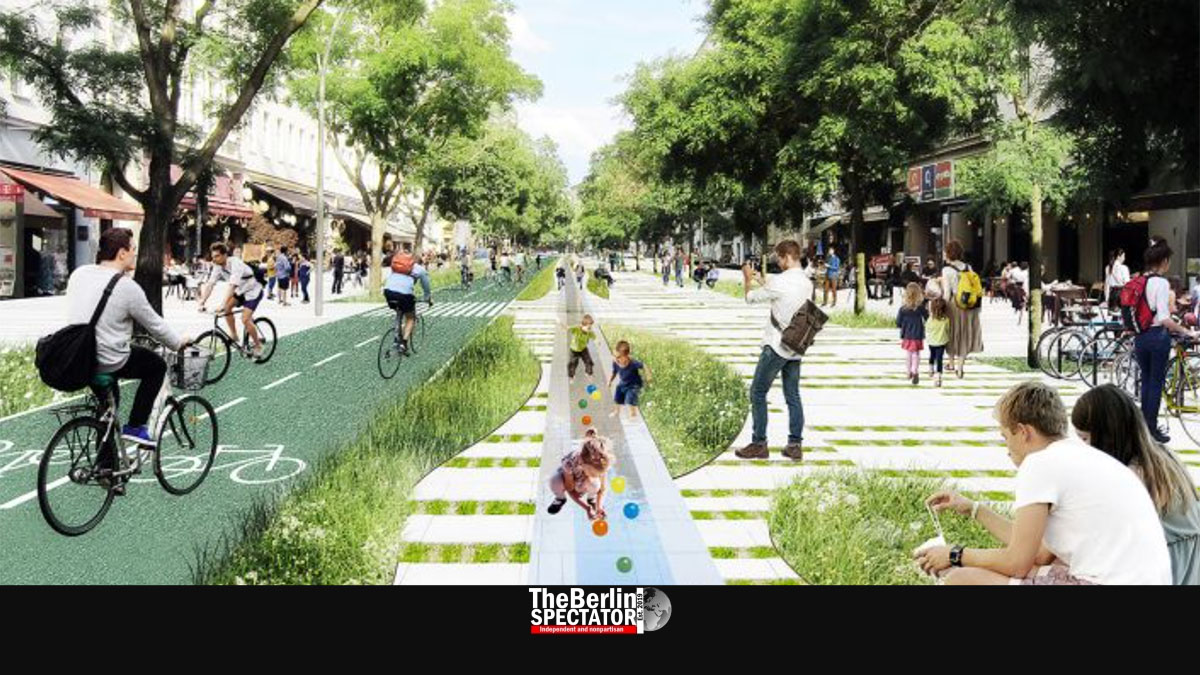 Berlin’s Friedrichshain-Kreuzberg district intends to turn part of Bergmannstrasse into a pedestrian zone. In one of the most posh neighborhoods, insects are supposed to benefit from the changes too.

Between the intersections with Nositzstrasse and Schleiermacherstrasse, Bergmannstrasse is kind of a food concourse that has been attracting Berliners and tourists for decades. Japanese, Vietnamese and Latin American restaurants as well as bars and cafés are being frequented by many people every day, including the in-crowd.

From Tea to Wine

The reason why gentrification is not an issue here is the fact that it already happened in this nice neighborhood, years ago. In order to be able to afford an apartment here today, the potential tenant needs to have deep pockets indeed.

Artists, other creatives, neighborhood legends who have been here since the invention of the juice extractor, but also elegantly dressed business people like the atmosphere around ‘Marheineke Markthalle’, where switching from black tea to white wine at 2:00 p.m. is normal. Neither the lunch nor the afternoon snack is cheap over here, but definitely delicious.

A flea market pops up behind the market hall on Sundays. Street musicians take turns entertaining the crowds. Members of the Bergmannstrasse community, those who do not have the time to relax, hit the coffee roastery across the street. Some are organized enough to call the Japanese place ‘Aki Tatsu’ in advance, for takeout Sushi.

The stretch the district authority wants to convert is half a kilometer (0.3 miles) long. Deliveries for restaurants and shops will supposedly be allowed from 06:00 a.m. to 11:00 a.m. only. Other than that, this part of Bergmannstrasse is supposed to be off limits for trucks, cars and motorbikes once the plans are being implemented. Cyclists will get a fancy bike lane in the new pedestrian zone.

Getting rid of motorized traffic and calming things down around this zone is the district authority’s goal. Those in charge want to install one-way streets here, and introduce a radical speed limit of 20 km/h (12 mph). “The supremacy of the car is over”, district mayor Monika Herrmann was quoted saying by German-language media.

“Most of those who live in these neighborhoods do not own cars. They move around using climate-friendly means such as bicycles and public transport, or they walk. That is why we are demanding more room for everyone”, Monika Herrmann says. Her plans for the new pedestrian zone include plants and ‘water elements’, in order to give insects a biosphere, right on Bergmannstrasse.

The details of the future configuration are supposed to be decided on later. First there will be an urban planning competition. The most attractive concept might be implemented. An exhibition about the plans for the Bergmannstrasse neighborhood will commence as soon as tomorrow, on September 17th, 2020, at Kreuzberg’s former city hall located at Yorckstrasse 4 – 11. The exhibition ends on October 2nd, 2020. Whether insects will be among the visitors remains to be seen.

A bit further north, in Berlin’s Mitte district, a temporary pedestrian zone was installed a few weeks ago (read separate feature Berlin: The ‘Friedrichstrasse’ Pedestrian Zone Experiment). What the Friedrichshain-Kreuzberg district intends to implement is obviously not the only project of this kind.

Deceleration with a Price Tag

Last year, the Friedrichshain-Kreuzberg district conducted a deceleration experiment at Bergmannstrasse. Wooden podests with tables and chairs known as ‘parklets’ were installed on parking spaces located on the same stretch. Bollards and green dots painted on the street were supposed to slow down the motorized traffic and give people more room. Later, the ‘parklets’ were replaced by boulders, which have vanished by now as well.

A year ago, the experiment was ended. Its price tag was 1.1 million Euro (1,25 million U.S. Dollars or 1 million Pounds).