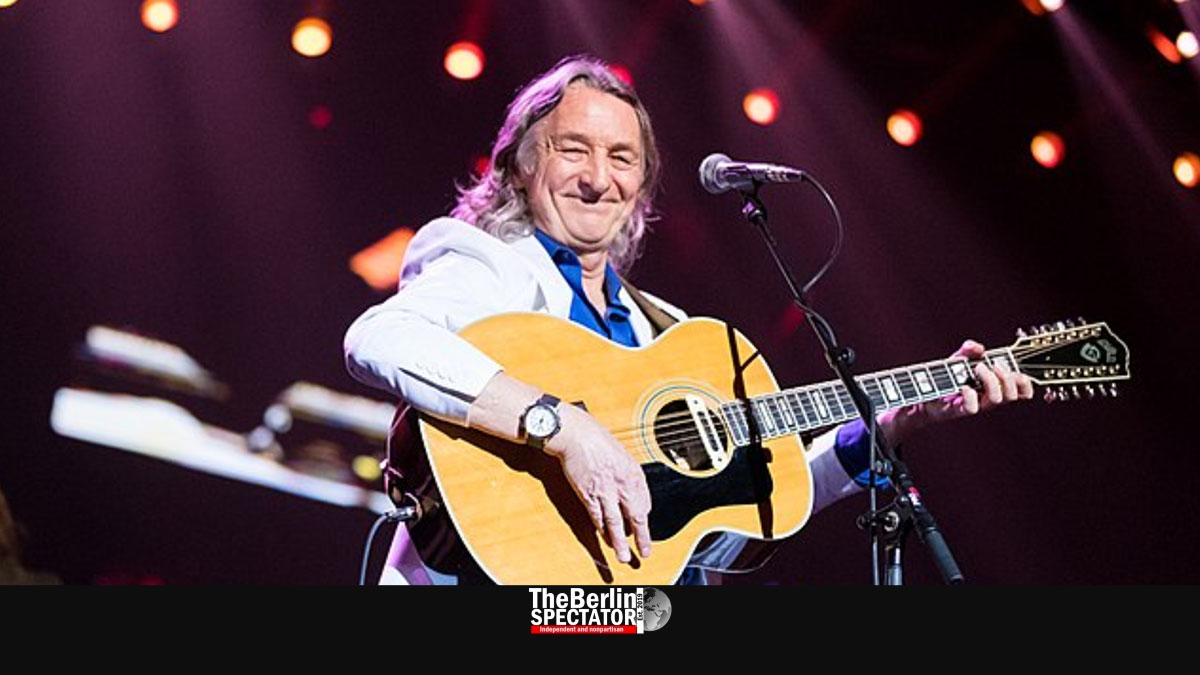 All he needs is a guitar and a microphone, and he will mesmerize thousands for an entire evening. Rodger Hodgson is the man. And he will be coming soon.

Berlin, September 16th, 2020 (The Berlin Spectator) — Something happened in 1978. ‘Breakfast in America’, an album by a British band called Supertramp, appeared in record stores. What they delivered was brilliant. The band combined intelligent lyrics with excellent compositions and an unmistakable voice with a unique overall approach to Pop music. While ‘Breakfast in America’ was recorded during the big AOR (Adult-oriented Rock) era, it basically created its own genre.

‘Take the Long Way Home’, ‘The Logical Song’ and even ‘Just Another Nervous Wreck’ were played up and down radio stations all over the American continent and Europe. Especially in Germany and the United Kingdom, Supertramp had a giant fan base. This is still the case, even though the group does not exist anymore.

‘Breakfast in America’ was not the first album Supertramp had released. In 1970 and 1971, they invented themselves with their first two releases. Recorded in 1974, ‘Crime of the Century’ had already fascinated many listeners. Others discovered this one and the follow-up album ‘Crisis? What Crisis?’ with that great cover after getting into ‘Breakfast’ first.

‘Dreamer’, a rather cheesy song from ‘Crime of the Century’, was — and still is — one of their biggest hits. Let’s not even mention ‘Bloody Well Right’ and ‘School’, two of the many great Pop or AOR songs Supertramp contributed to music. It is safe to say that ‘Breakfast in America’ is one of the most important albums in Pop music history. Amen.

The two main composers were Roger Hodgson and Rick Davies. Both of them are vocalists and keyboarders as well. Hodgson knows how to handle guitars, on top of it all. The voice that became Supertramp’s trademark was that of Roger Hodgson.

In 1983, a problem arose. They were on a tour that promoted their ‘Famous Last Words’ album with the hit ‘It’s Raining Again’, when Roger Hodgson announced he would leave Supertramp. This was a shock to millions of fans. Supertramp without Hodgson is like Bob without Dylan, Santana without Carlos or Supertramp without Super. Still, the band kept on working. There was a short reunion in 1993.

While the band disappeared a few years ago after several attempts to revive it without one of its two main men, someone started doing very successful and convincing solo tours, namely a multi-talent by the name of Roger Hodgson. He performs in different settings. The two-man version includes the man himself and a saxophone player, while the full version is an 8-piece band.

The thing is: It may always be good to have a band, but Roger Hodgson, who is 70 by now, does not really need it. Switching back and forth between keyboards and an acoustic guitar, he can do two-hour gigs that thrill his fans and the old Supertramp fan base just as much as he does with the band. Hodgson equals Supertramp, maybe not officially, but he sounds like the band he left 37 years ago.

Let’s finally get to the best part of this article. Ready? The man himself, Roger Hodgson, will be back on tour in 2021, once and if that stupid Corona virus is finally gone. First, he will be doing as many as ten gigs in Canada in April of 2021. He might need a warm fur coat over there. Then, in June, it is Europe’s turn.

Three in a Row

Roger Hodgson probably believes that, like a king without a castle, like a queen without a throne, he’s an early morning lover and must be moving on. And he is right. At age 71, he will hit Brussels on June 1st, 2021. Actually, that is where he will do three nights in a row, meaning the backline will not have to be carried around like crazy.

Then, he is scheduled to invade his home turf. Liverpool, London, Cardiff, Brighton, Birmingham, Southend and even Glasgow are marked on the touring plan. Hinwil and Pratteln in Switzerland are covered as well, on June 19th and 20th. After three gigs in the Netherlands and France, they will be crossing the border into Germany.

Mr. Supertramp is scheduled to raise roofs in Munich, Hamburg and Eschweiler on July 13th, 15th and 16th, before doing the same at four French and Spanish locations. Then, in late August and September of 2021, it is back to Germany, where he will perform in Salem, Ritterhude and a city called Berlin. But his booker did manage to squeeze in a gig in Belgium’s Middelkerke somewhere in between.

Amsterdam, Copenhagen and Randers (Denmark) are next. By the time Hodgson gets to Rostock, Hanau and Mannheim, it will be mid-September. It’s funny how time flies when you’re having fun, right? In late September, the travel party will be heading for Spain again, and Portugal. This is what we call a tour.

Roger Hodgson’s entire touring plan can be checked here. And tickets for his German concerts are available here.

Photo at top of page by Sven Mandel/CC-BY-SA-4.0