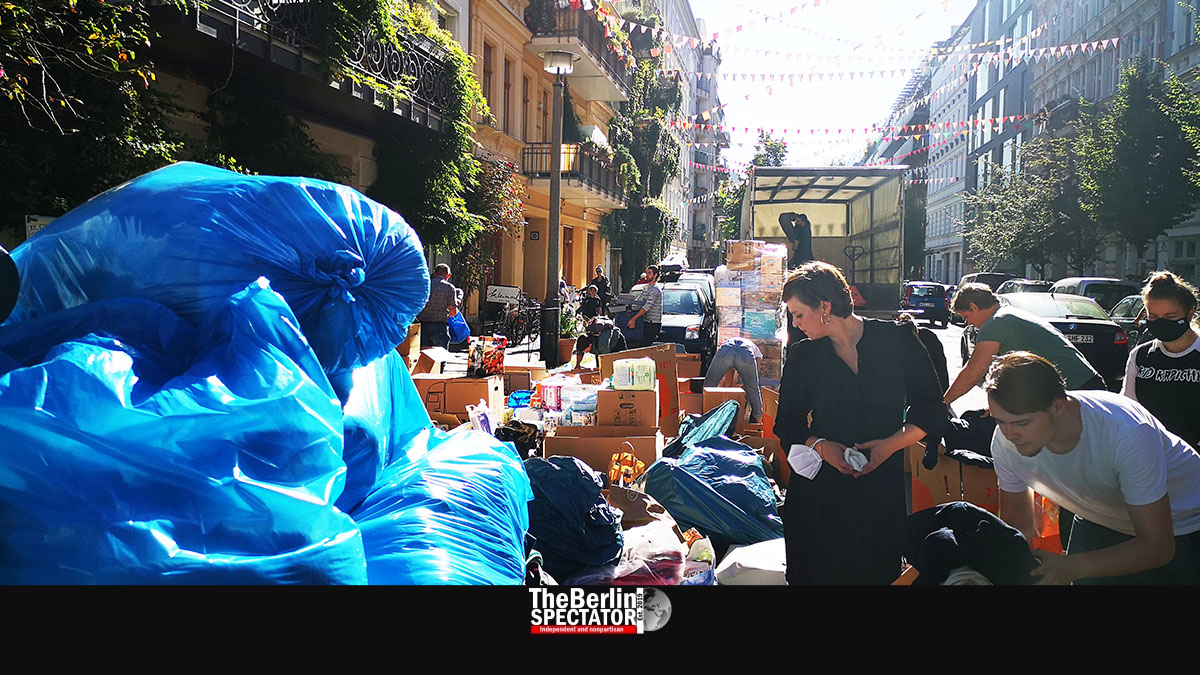 In Germany, the federal government and the NGO ‘Europe Cares’ are working on helping thousands of asylum seekers in Greece. While the NGO is sending relief aid to Lesbos, the government is taking in 2,750 refugees from several islands.

At Choriner Strasse in Berlin’s Prenzlauer Berg neighborhood, huge piles of mattresses and blankets were waiting to be loaded onto a 7.5 tonne truck on Friday. The street was also filled with piled-up boxes that contained diapers, baby food, food for bigger children and adults, hygiene articles and other goods needed in Greece.

Many Donations for ‘Europe Cares’

Lots of Berliners reacted to an appeal for donations sent out by ‘Europe Cares’, an NGO run by the pro-European party Volt. In the early afternoon, all of those donations on the street did not really look like they were going to fit into the truck all at once. At the same time, people kept on coming to drop off even more boxes with all kinds of items.

‘Europe Cares’ called the collection in Berlin “very successful”. On top of items, many Germans donated money. With the funds it collected, the NGO intends to cover the trips to Lesbos and thousands of liters of water for the migrants in Lesbos, about half of whom had reportedly entered a hastily built new refugee camp by Friday evening. Some 6,000 people were still living on the streets, under makeshift roofs made out of branches and plastic bags and in small camping tents.

Collections in Hamburg, Dresden and Stuttgart

The NGO also collected donations in Hamburg on Friday. “The collection started really well and looks like Hamburg will surprise us, too”, ‘Europe Cares’ announced. Before, they had been to Dresden and Stuttgart as well. Many of the mattresses and blankets that came in on Friday were donated by ‘Obdachlosenhilfe’, a charity organization for the homeless.

In total, 64 pallets of goods were collected by Thursday night. Several more were added since. A big shipment to Lesbos will leave these days, and it is not the first one. The recent fires at Moria Camp triggered the latest collections.

No Reward for Arsonists

While ‘Europe Cares’ seems to be doing an excellent job providing the migrants in Lesbos with food, water and items they need, the German government’s task is more complicated. Earlier this week, it decided to take in 408 migrant families, a total of 1,550 people, from several Greek islands.

Both Athens and Berlin made sure refugees who were accused of setting the Moria camp on fire were not rewarded for their action. The Greek government had also opposed the idea of only letting asylum seekers from Lesbos go to Germany, for the same reason. Migrants on site are not supposed to believe burning down camps will get them tickets to European countries quickly.

The total number of refugees Germany will accept is a lot higher than 1,550. Last week, the Berlin government had announced it would accommodate 150 unaccompanied minors from Greece. On Friday, 53 of them were already in Germany. In addition, 243 refugee children who need psychological and other medical treatment were accepted, along with their “core families”, meaning their parents and siblings.

All in all, Germany is taking in 2,750 migrants from Greece, on top of the 1.7 million asylum seekers who have come to the country since the refugee crisis of 2015. Chancellor Angela Merkel and her ministers agreed to this number after ten other E.U. countries and Switzerland promised to take in refugees as well. The government did not want Germany to be only country to accept more asylum seekers, for a number of reasons.

Several federal states in Germany, including Berlin, had offered to take in migrants from Greece for many months. They had criticized the federal government for not accepting more refugees, and for not letting the states do so on their own, without permission from the Interior Ministry.

Since Interior Minister Horst Seehofer announced Germany would take in 2,750 migrants, many critics became silent, except for the extremist right-wing party AfD. One of their leaders, Jörg Meuthen, accused Angela Merkel of being a “migration fanatic”. He praised Austria’s Chancellor Sebastian Kurz for not accepting any refugees. Vienna intends to send a big delivery of relief supplies instead.

Also there are still organizations that want Germany to take in all refugees from the former Moria camp. But, even if Germany wanted to do so, the Greek government would not agree.