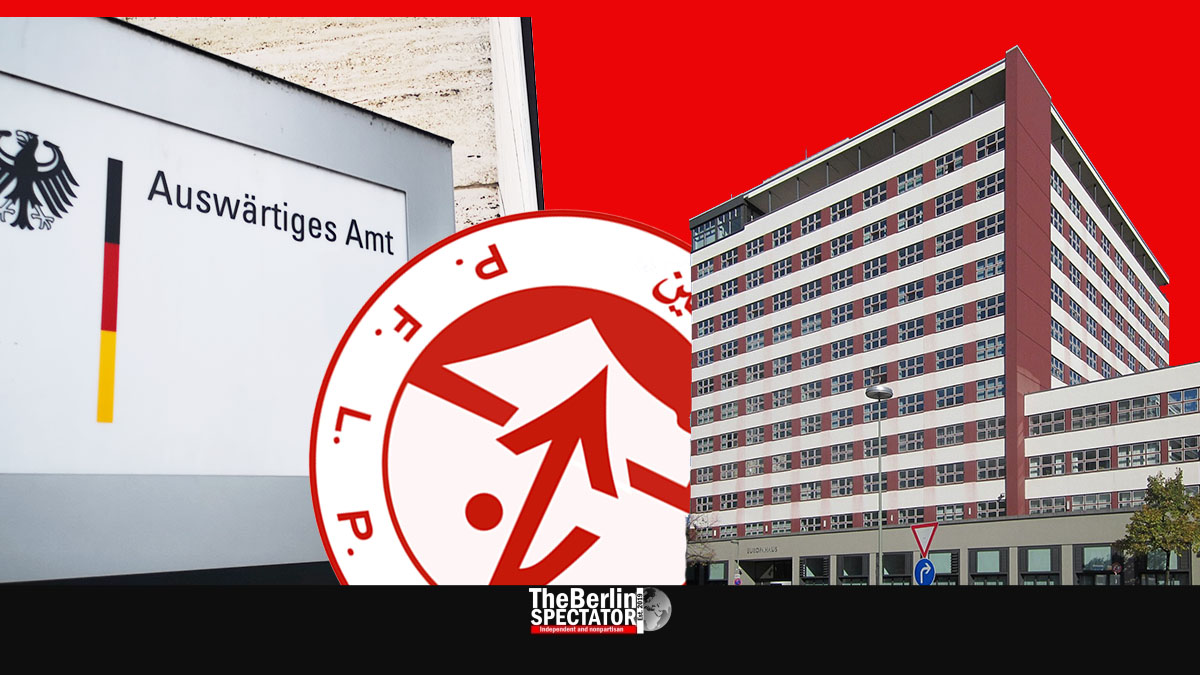 While the United States of America brokered a peace deal between Israel, the United Arab Emirates and Bahrain, Germany chose the opposite path, in at least one way: Berlin is still funding NGOs that are affiliated with the terror organization PFLP.

When the agreement between Israel, the UAE and Bahrain was signed last month with the United States of America, the outlook for the situation in the entire Middle East changed. While brokering the deal, the U.S. chose a promising strategy: The Americans bypassed the Palestinian leadership.

Mahmoud Abbas and the Palestinian Authority (PA) have been sticking to their “three nos” for decades. “No peace with Israel, no recognition of Israel and no negotiations with Israel” is still the PA’s motto. So is its financial support for terrorists who murder Jews, a practice Abbas openly defends. Still, he is being treated almost like a statesman when he comes to Berlin. The E.U. is co-funding his PA.

The official main goal of his colleagues of Hamas, the terror organization that controls the Gaza strip, is to wipe out Israel. Countless missile attacks against Israeli civilians were launched. The Jewish state was pulled into wars it never wanted, since it pulled out of Gaza unilaterally in 2005. A peace agreement involving the Palestinians under these circumstances is simply impossible.

In Germany, the peace deal signed on the other side of the Atlantic Ocean is being looked at with suspicion. On major media channels, some commentators said the agreement needed to be interpreted carefully. It had caused worries because it could “change the balance of power” in the region.

When the agreement was signed at the White House in Washington D.C., Germany’s Foreign Minister Heiko Maas said the deal was a “historic step” and “an important contribution to peace in the region.” He also stated it was positive that Israel had suspended its annexation plans, and reiterated what the German government always says: “A negotiated Two-State Solution” was the only way to reach a durable peace.

In the past decades, the German government has kept on telling Israel to work on the Two-State Solution, even though that is exactly what the Jewish state did. The solution Maas told the Israelis to pursue could have been reached decades ago, had the Palestinian leaders not rejected it. This is obviously part of the “three nos”.

Germany, a country that has not had one single diplomatic success in the region, is still taking that old demand to the wrong address. Besides, it is still helping certain Arab countries to single out Israel at the United Nations. Just the other day, on September 14th, Berlin abstained when Iran, Saudi Arabia and Pakistan, but also Belarus and others voted for a resolution that accuses Israel of violating women’s rights.

One could not make this up: Iran and Saudi Arabia, countries in which women hardly have any rights, accuse the tiny Jewish state of Israel, where women have all rights, of violating them. And Germany abstains. The diplomats from Berlin could have voted “no”, like Australia, Canada and the United States did. But the orders from Berlin were obviously different.

There is another big issue, namely the funding of Palestinian NGOs that are affiliated with terror organizations. According to the Jerusalem-based ‘NGO Monitor’, which was founded with the purpose of looking into matters of this kind, German ministries and their agencies continue to support organizations “with reported ties to the Popular Front for the Liberation of Palestine (PFLP).”

In certain radical left-wing circles in Germany, and in the BDS movement, PFLP terrorists who have been part of attacks in which Israeli Jews were murdered are being admired and have been invited for speeches, including Rasmea Odeh and Leila Khaled.

In June, the founder and President of ‘NGO Monitor’, Professor Gerald Steinberg, demanded an end to the funding of terrorism by Germany in an interview with The Berlin Spectator. His organization recently informed the Federal Ministry for Economic Cooperation and Development in Berlin about its findings.

An answer they received from there on July 10th, 2020, said “no such allegations with regard to our programs in the Palestinian territories” had been “substantiated”, even though that is exactly what the ‘NGO Monitor’ had done. While the Netherlands have now understood the issue, and froze funds that were supposed to be wired to NGOs connected to Palestinian terror organizations such as the PFLP, Germany has not.

At least four organizations with reported ties to the PFLP are being supported financially “by ministries and their respective agencies” in Germany, ‘NGO Monitor’ says. They are the Union of Agricultural Work Committees (UAWC), the Palestinian Centre for Human Rights (PCHR), Al-Haq and Addameer.

In some cases, the PFLP itself confirmed ‘NGO Monitor’s allegations. For instance, it admitted that Samer Arbid was a commander in the group, and “one of the heroes of the heroic ‘Ein Bubin’ operation”, a bombing in which Rina Shenrav, a 17-year-old Israeli girl, was murdered. The same Samer Arbid is an accountant with the UAWC Germany supports.

Abdel Razeq Farraj, the UAWC’s Finance and Administration Director, is another case that highlights the ties between Palestinian NGOs and the PFLP. He is currently standing trial in Israel for his role in the same bombing, according to the ‘NGO Monitor’.

Khalida Jarrar, Addameer’s vice-chair until 2017, was arrested in October of 2019 on suspicions of “involvement in terror activity”. On December 18th, it was revealed that Jarrar had “emerged as the head of the PFLP in the West Bank” and that she was responsible for all of the organization’s “activities”, the ‘NGO Monitor‘ states. “According to her indictment, she headed the PFLP in the West Bank since June 2016.”

The list goes on and on. Leading representatives of the Palestinian NGOs in question turn out to be PFLP terrorists. So far, this issue does not seem to be “substantiated” enough for Germany. At least for now, the funding continues.

All findings published by the ‘NGO Monitor’ can be accessed here.